20th Century Masters: The Best of The Carpenters

Thread Starter
I just noticed on Billboard that the 2002 compilation “20th Century Masters The Millennium Collection: The Best of the Carpenters” hit #172 on Billboard’s Top 200 chart for the week of February 18, 2012.

Staff member
Moderator
That would have been just past the 30th anniversary of Karen's passing. No doubt there were some radio and television mentions that spurred interest in whatever collections were out there. This one being a cheapy would have been a good choice for someone on a budget. 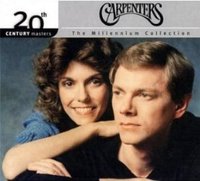 That comp gets a lot of negative talk, but I always thought it was decent for a budget release. For one thing, it's mastered really well. All of the songs sound crisp and bright - maybe too bright for some, but I like it that way.

I also thought it was clever to have provided a smattering of hits and some favored album tracks, yet it didn't "give away the store" as a couple of their biggest hits were among the missing.
T

Thread Starter
I remember buying it in 2002, but I rarely listen to it. It could’ve done without “I Believe You” and could’ve used like “Honolulu City Lights” or maybe even thrown one of Richard’s solo tracks, like “Who Do You Love?”, on the disc. Otherwise there’s not even a rare remix on the disc.
You must log in or register to reply here.
Share:
Facebook Twitter Pinterest Email Link
Top Bottom