What! No Carpenters? Hmmm

Staff member
Site Admin
I can eliminate Chris Montez and We Five, which leads me to two problematic choices for favorite. Most anything by the Tijuana Brass will top my voting, but the TjB recording has big problems going all the way back to the original stereo LP. There's a "garbled tape" sound, particularly on the left channel on this track, from about 3 second in and up until 30 or 45 seconds in. It begins to abate at around 30 seconds, but it's still there to a smaller degree until about 45 seconds in.

I first noticed this garbled tape sound way back in the early days of this board. S.R.O., as a CD, was released in Japan for a short time and I was one of the lucky ones to have grabbed it when I saw it for sale in a store that carried imports. When I got a CD recorder, I promised another member to make a digital copy of the album on CD and send it his way. In the years that I'd owned this particular CD, I probably only listened to it in car players or over speakers and just didn't notice the distortion. As I was double-checking the recording I'd made, I was horrified to hear this distortion in the headphones and thought there was something wrong with my recorder or settings or something.

After comparing it to the stereo LP I had, I noticed the same distortion was present, but less noticeable under all of the normal vinyl noise. So, I chalked it all up to a bad piece of tape that somehow got mangled early on in the mastering process years ago. Every time the track "Our Day Will Come" appeared on a compilation, it still had that same distortion. And it remains today on both the Shout and Herb Alpert Presents remasters.

A few years ago, I learned that the old 45 on which the song appears (the flip-side of "Mame" AM 823), though mono, has no such distortion. And the same went for the mono LP of S.R.O.

Then one day I was surfing eBay and saw this wild cover for a German version of the S.R.O. album with a different subtitle called "brandnew", and they added a pole-climbing lady to the cover picture: 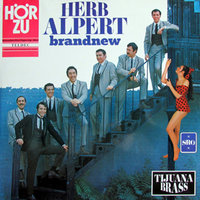 That was just too bizarre to let pass, so I ordered it from eBay, thinking it would be a nice example of a foreign pressing's design. But when it arrived, I was quite surprised to find very little, if any, of the tape distortion on "Our Day Will Come":


Now on to Roger Nichols. Their version seems to be consigned to only mono from a single. The CDs released in Japan and elsewhere used a needledrop of the single. Early CDs had clicks and pops. Newer masterings fixed those. I think I prefer the nifty harmonies of Roger Nichols & The Small Circle Of Friends to Herb's arrangement. Tough call.

Staff member
Site Admin
For me, Roger Nichols by a longshot. This is a tune that needs vocals, and the vocal arrangement is what makes this version a winner.

Thread Starter
Herb's arrangement is stellar. The three key changes (each with a different mood) and Bob's bone solo kick off what is arguably the TJB's finest LP. In particular, Herb plays his parts effortlessly including his sailing up to Bb below high C (including grace notes) on the second pass. Regarding the vocal versions, Nichols' arrangement and vocal acumen are light years ahead of We Five. Wish I could select select both Herb and Roger...but for me Herb wins this one.

Harry said:
the TjB recording has big problems going all the way back to the original stereo LP.
Click to expand...

S.R.O. does seem to have its engineering curiosities. Although deferring to your ears, Harry, I'll offer that there are obvious sonic issues with Bean Bag and Flamingo (the former sounds like a multi-generational copy was used while the latter exhibits distortion).

Staff member
Moderator
Voted for Nichols' version. Interesting that Ruby & the Romantics, whose hit version came out in 1963, later recorded a single for A&M. It was # 1042: Hurting Each Other/ Baby I Could be so good at Loving You in 1969. The song was written by Bob Hilliard & Mort Garson. Garson's early synthesizer experiments came out on A&M in 1968-69. These included WOZARD OF IZ, ELECTRONIC HAIR PIECES and twelve SIGNS OF THE ZODIAC albums (one for each sign).

Staff member
Site Admin
Funny, just going through Cal Tjader's Verve albums, I remembered that "Our Day Will Come" is featured on the album Along Comes Cal, with an arrangement by Chico O'Farrill. "Green Peppers" from Whipped Cream is also on this album.

LPJim said:
These included WOZARD OF IZ, ELECTRONIC HAIR PIECES and twelve SIGNS OF THE ZODIAC albums (one for each sign)
Click to expand...

(He must have had someone who really liked him at A&M to issue all those LPs. It's always been a major sore spot with me that Garson could get the green light to do all that #&$% yet, Roger only got one shot at an LP.)

GDB2LV said:
What! No Carpenters? Hmmm
Click to expand...

This isn’t part of the survey, but if anyone is interested in hearing the Carpenters’ standalone version with no DJ vocals from their “Oldies Medley” from “Now & Then” (1973), you can hear the 1997 remix here:

As far as the versions presented go, I like the upbeat energy (and so I hear cowbell?) on the Herb Alpert & TJB version. I especially like that German version that @Harry shared!
Last edited: Jun 23, 2021

Sorry, but to me, the Nichols version sounds like the record is pinched-edge warped and pressed off-center...and the vocal harmonies are waaaaay overdone to the point of sounding "gimmicky". The best vocal version for me is the original from Ruby and the Romantics...a little dreamy, rather starry-eyed, some teen angst...perfect for 1963 pop. Karen does a great job with it, too...the melody is fluid enough that her voice just sounds as smooth and rich as sweetened butter...it's a song she was meant to sing, and should have been a single on it's own.

Herb takes things to a different level, like he always seems to do...it's almost like a different song. The up-tempo-with-a-beat reminds me of his take on I'm Getting Sentimental Over You. It's more playful, more relaxed, more grown up...the original vocal seems to be referring to a wedding day that seems far off into the future; Herb's version seems to be saying,"...Honeymoon, Baby!!!"

GDB2LV said:
What! No Carpenters? Hmmm
Click to expand...

Cuyler said:
This isn’t part of the survey, but if anyone is interested in hearing the Carpenters’ standalone version with no DJ vocals from their “Oldies Medley” from “Now & Then” (1973), you can hear the 1997 remix here:

As far as the versions presented go, I like the upbeat energy (and so I hear cowbell?) on the Herb Alpert & TJB version. I especially like that German version that @Harry shared!
Click to expand...

Karen's vocal and Richard's brilliant arrangement blow these other versions away. Breezy yet substantial.
L

All the aforementioned versions pale in comparison to the original No. 1 hit from 1963 by Ruby and the Romantics. One person called it the wedding song of '63. Also note the songs beautiful Bossa Nova background beat which had just come to the shores of the USA

^^^ It is quite pretty although a little dated in arrangement. Still evocative of the era!

I voted for the TJB version. We Five & Roger Nichols would be tied for second. And a thumbs up for the cool & tasteful version by Ruby & The Romantics.

Staff member
Moderator
The Carpenters version probably should have been part of the survey, even though it's only part of a medley it's still a fairly complete version of the song.

Even if it was included I'd probably still vote for the TJB version with the Carpenters running a close second.

I first heard the TJB version on one of the infamous "black" A&M 8-track tapes. Those were bound to tangle up, and the first time I heard that song, was on my first play of that tape and sure enough, about a minute in, the tape jammed. I was eventually able to untangle it enough to get through it a few times, but finally gave up the hassle and didn't hear the song "ungarbled" until I got the LP some years later.

Format aside, I have never liked the sound of that particular recording -- I think it's partly due to the tape garble that Harry mentions, and also just the production of it, it doesn't seem to have enough bottom end to me. It sounds very midrangey. The rest of the SRO album doesn't suffer from this, so I wonder what adjustments were made. Herb HAD to have known that it sounded different from the other songs, one would think anyway. But I still really like it and he must have too, considering he put it up-front on the album.

The Carpenters one, positioned as it is near the end of their oldies medley, is just a perfect fit in that context of the other songs. It's a nice mellow ride before the shoo-be-doo/rock'n'roll of "One Fine Day" that ends the medley. Excellent stuff. But I don't think it works as well without that context to support it, so that's why my vote has to go to Herb Alpert.
You must log in or register to reply here.