Thread Starter
Oh, Mr. Bill, I do have a similar Claudine story -- though not as exciting as yours. (I must say, I'm quite impressed that you had all 5 LPs way back in '82.)

It was round about 1999 and I had a tile layer working in my kitchen. He showed up and Claudine's 1st release was playing. I casually asked him if the music was OK -- to which he replied it was fine... Lo and behold after about 15 minutes he came up to me and politely asked if I had something else...I actually laughed and said that what I had on was not everyone's cup of tea, which was why I initially asked...I asked him what he'd like to hear and he said "anything"

. Owing to his emerging state of despair and sizing him up, I switched to Cream. He seemed satisfied.

Claudine's music is an acquired taste and Not Every one can acquire it ( I discovered her stuff in the mid 80s and I was continually bullied by neighbors who either wanted Metal or Country and nothing else the poor souls they didn't know what they were missing.

Staff member
Site Admin
All this talk lately about Claudine Longet and who should show up on last night's episode of COMBAT? Yep. She apparently had a bit of a career playing the WWII French waif in series like COMBAT, 12 O'CLOCK HIGH, HOGAN'S HEROES, McHALE'S NAVY, and THE RAT PATROL. 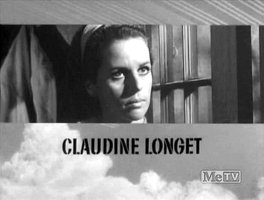 Easily Claudine. I always thought Wanderlove rivaled Hello Hello for the best song on her first A&M lp. The best thing about her version is the cool creative arrangement... REALLY well done! After Claudine, I would say Judith's version is second best. The Sandpipers drag this song down to a turtle's crawl. A slightly faster tempo would have been a great improvement.
You must log in or register to reply here.