Julius and the guys nailed this one.

Staff member
Site Admin
I'm torn between three of them. Sandpipers, I can do without, I guess, but the other three are real close in my opinion. I'll give Brasil '66 the edge, just because I heard theirs first.

Staff member
Moderator
I'm pretty much on the same page as Harry (as I often am with these things). I heard the B'66 version first and it continues to be my favorite.

My second place would have to be Bossa Rio, although I haven't checked it out in a long time. I'll listen to it again -- right now I'm at a computer with no speakers!

I think the BMB version is kinda draggy. But I have always liked their "faster" songs the best.

Thread Starter
Although I'm not a fan of any version, I went with Bossa Rio -- as Gracinha's lead vocal is tops among this crowd of covers. I agree with Mike that Julius plays it too slow while for my nickel Sergio is too fast; and the Sandpipers -- being The Sandpipers -- at their nadir are sonically akin to that leaky faucet in the rear bath that's been ignored for six weeks...

My main issue with nearly all vocal versions of Wave is that essentially all vocalists incorrectly sing the melody. Jobim's uncommonly enticing melody, which features that diminished 6th run up the scale, requires a near 2-octave vocal range to sing. Given most pop singers don't possess such a range, in response the last 5 notes of the A-section melody are routinely taken up an octave to close the section. Sinatra gave the original version a whirl in 1970. Arranged by Deodato and with Jobim on guitar, it even incorporates elements of its then recent sister composition, Tide; yet with all of this, that version just drags too slow.


(In 6th grade, my pop organ teacher formally introduced me to bossa nova music and dubbed me a cassette of the Verve Jobim LP and at that time I learned the music for Meditation. She suggested Wave as the next bossa nova piece to learn. I think it was in 10th grade that I found the Jobim / Wave LP. I had no idea there were any vocal versions until I found Equinox in college -- but upon its initial hearing I was disappointed and to this day all of these vocal versions employing the octave jump of the last five notes just sound wrong to me.)

Staff member
Site Admin
Though I'm familiar with Frank Sinatra's version, and his somewhat growly attempt to get the melody as intended, the octave jump never bothered me, probably because I heard Sergio's version first.

Just a side-note, if I may, regarding the YouTube presentation of the Bossa Rio track. It's clearly from a vinyl record, and yet A&M Japan released this one on CD. Since this track on YouTube comes from the record company itself, I guess one end of Universal doesn't know what the other end is doing or has done. It also hints at the fact that US master probably burned in the fire.

I found a similar thing with a Baja Marimba Band track just yesterday. It was "Those Were The Days", another album that's been released by A&M Japan on CD, yet the YouTube tracks clearly exhibited the familiar noises from vinyl.

Thread Starter
...Oh, good grief! I just discovered my Bossa Rio CD exhibits the incorrect ID number: It should be SP4191, but instead the CD jacket shows SP4168, which is the ID for We Five / The Return of We Five. Both were issued as part of the Japanese A&M 50th Anniversary SHM cycle back in 2012. (I wonder if the We Five indicates SP4191?) 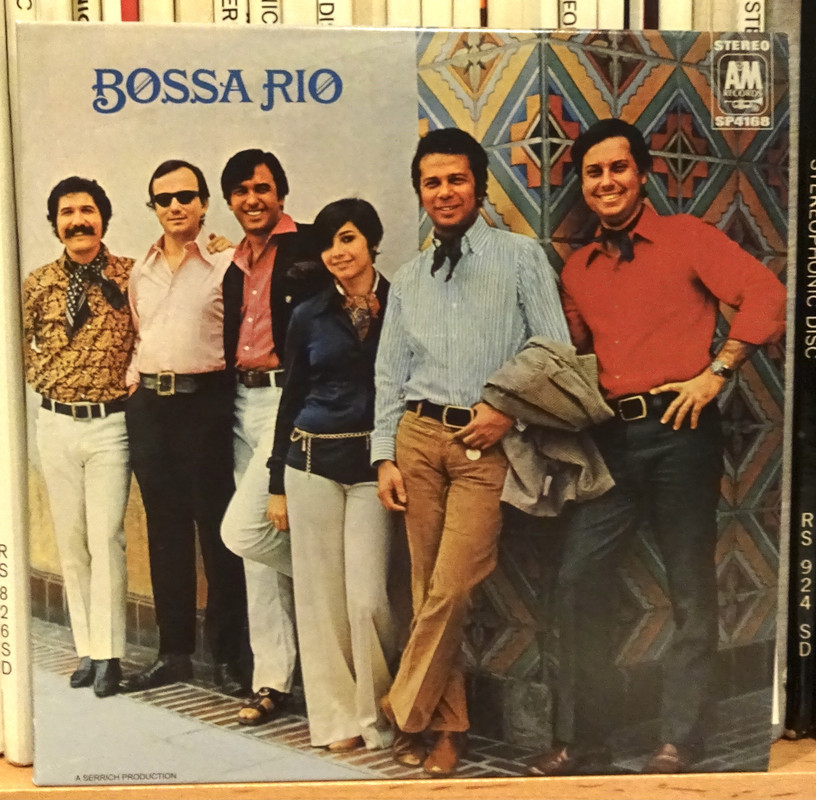 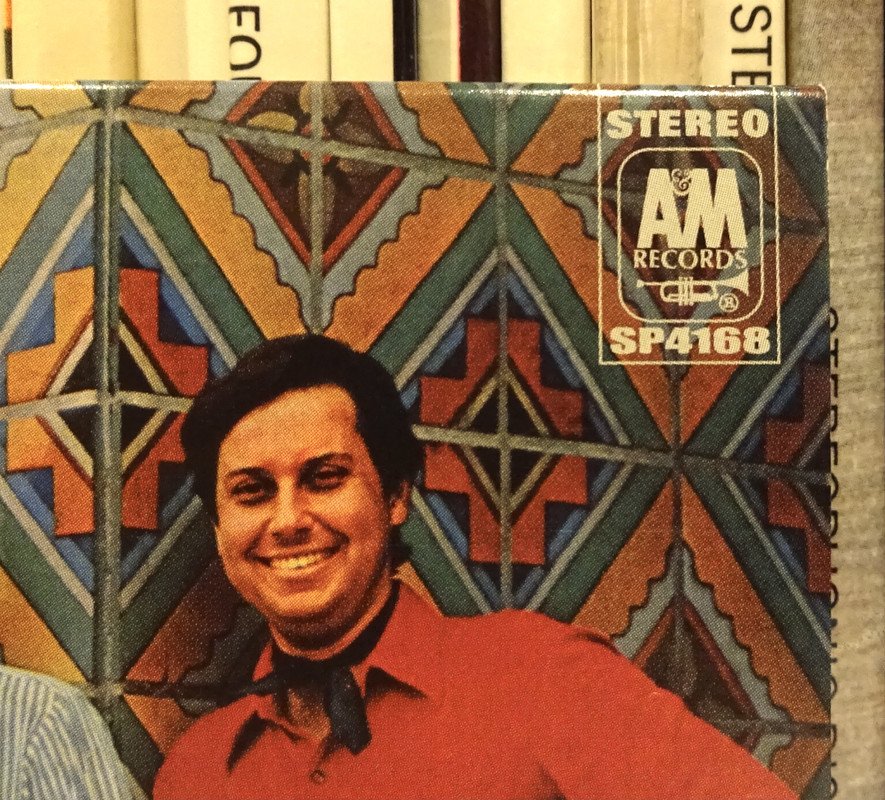 Staff member
Site Admin
Quite a mistake there...

I have an earlier Japanese issue of BOSSA RIO from back in 1993-95 (it's POCM-1883) and its front cover shows the drop-down STEREO A&M logo, though there's no catalog number printed underneath on this CD.

I wonder if A&M Japan might have originally given the album a different catalog number (?)
J

I voted for Sergio Mendes & Brasil '66 - it's the one I'm most familiar with. I do think the tempo is a little fast (although it's really just a hair faster than Jobim's original), but I really like John Pisano's guitar work and the "Together" call and response vocals - they give the song a very cool 60's-pop vibe that I Iove. The Bossa Rio version is also very nice though - that's probably what I would consider the "correct" tempo for the song. But, having played the song countless times with bands at parties, I will also say I think it's sexy when it's a little on the downtempo side, so for me the Baja Marimba Band version also works - and they actually play the correct melody at the end of the A section! (Even though I heard the octave-flip version of the melody first, I agree that the real melody is better.) The only one that leaves me cold is the Sandpipers' version.
L

I'll pick the Brasil 66 version as my favorite. Lani once said to my pleasant surprise that Jobim no less participated on the Equinox album. John Pisano on the album jacket is credited as the guitarist--most probably on electric guitar. I surmise that Jobim is on acoustic guitar such as on "Triste". I know for a fact and have seen him play the piano, flute and acoustic guitar--never an electric guitar. I also really like the BMB version. The slow tempo doesn't bother me. I love the way the horns are arranged.

In my lifetime I have been blessed to have done a lot of leisure traveling in the USA and abroad. And wherever there is a piano bar I always request "Wave", as it is a perhaps Jobim's most famous Bossa Nova standard that I figure most pianists have in their repertoire. And sure enough they all know "Wave" and gladly perform it. Then this is an opportunity for me to ask if they could play some more Jobim songs. And sure enough they will play a medley of his songs. I sit back and relax with a beer and listen to my favorite music in the world. How lucky can I be.
L

Perhaps the Maestro himself Antonio Carlos Jobim has the best version of "Wave", per this 1986 Today Show mini concert. How well I remember this, as before I went to work in 1986 I set my Sony Beta VCR timer so that I could record and later playback this segment when I got home. The video tape became a prized possession. Who would have known through technological change that this segment could be viewed off a home personal computer so many years later.

Staff member
Site Admin
Can't say I care for any of these covers, so I didn't vote. After hearing Jobim's original version from the self-titled album decades, nothing comes even remotely close to it.
L

Rudy, you have a good point. It seems quite often that the best version of a song comes from the composer and not from the covers.

lj said:
Rudy, you have a good point. It seems quite often that the best version of a song comes from the composer and not from the covers.
Click to expand...

True enough, but then and again along comes an artist like Herb who takes an already popular song and makes it all his own.
You must log in or register to reply here.