A TASTE OF A&M RECORDS compilation 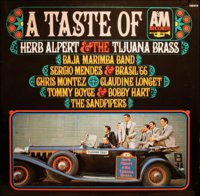 This album looks like it was released in Germany and other areas in Europe. (There's another album with a similar title and cover from Canada, too, apparently.)

My question is about the very first track. In some listings on Discogs, the first track seems to have two parts, and Intro comprised of a portion of "A Taste Of Honey" and then "Gotta Lotta Livin' To Do."

I don't own this comp, but was inspired by the mysterious first track, so I took the opening of "A Taste Of Honey" and just where the kick drum would start, I appended the full "Gotta Lotta Livin' To Do". Surprisingly, this sort of works. To those who may own it, is that how it was done on this album?
You must log in or register to reply here.