Staff member
Site Admin
Thread Starter
I've recently latched onto a track from WILD ROMANCE, the seventh track on the album, "African Flame". This track flew under the radar to me all these years, but I've come to really like it. It was written by Herb and John Barnes. The song was released as a single in its own right: 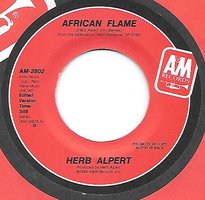 I don't own that particular single, but I do have it on the b-side of the "Diamonds" 45 (AM-2929). And I have that one in two forms, one is a vinyl single in a picture sleeve (I have two of those), the other is a styrene single in a plain sleeve. The 45 versions are all edits to a length of 3:58. 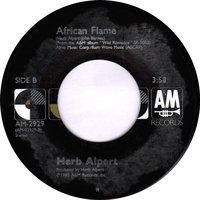 The of course there's the album version on WILD ROMANCE. That one clocks in at 6:23: 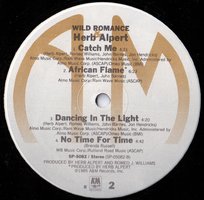 But there's also a third version that's probably the hardest to find of all. The song was placed on the b-side of a 12" single that was the Latin answer to "We Are The World." It was called "Cantare, Cantaras (I Shall Sing, You Shall Sing)" and released on CBS International Discos. The a-side was recorded in A&M Studios, just like "We Are The World", gathering Latin stars from all forms of the entertainment world to raise money for the poor in Latin America, calling themselves HERMANOS. There are a number of well-known artists that took part: Maria Conchita Alonso, Sergio Mendes, Irene Cara, Roberto Carlos, Vikki Carr, Gal Costa, Placido Domingo, Jose Feliciano, Cheech Marin, Miami Sound Machine, Ricardo Montalban, and Lalo Schifrin among many others.

The song, "Cantare, Cantaras", sounds a lot like the "We Are The World" effort, with solo voices starting and building to a big multi-voice chorus. It was written by some familiar names from Herb and Lani's Latin efforts: Albert Hammond, Juan Carlos Calderon and Anahi.

And curiously, the b-side is "African Flame" - but it is neither the single version nor the album version, but one somewhere in between, clocking in at 4:41. I suppose this could be considered the 12" edit, though I don't see the song on a 12" disc anywhere else. 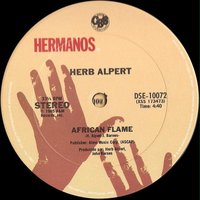 Staff member
Moderator
I had never noticed before how they "simplified" the trumpet graphic when the A&M logo was updated for the black label.

I've never really been a fan of the Wild Romance album but this thread makes me want to check that song out.

I’ve always liked this “record”. Shame it wasn't remastered. I have to turn up volume a lot to hear it. Can’t explain why I’ve always been a bit fond of of this release.

Listening to this tune now. It is one of the better ones on on this issue. My favourites have always been “It’s All For You” and “No Time for Time”. Odd bc I tend not to like singing tracks - the major exceptions, of course, being “Save the Sunlight” and “Come What May” (more Lani Hall, I realize).
Last edited: Mar 10, 2022

Sometimes coincidences really happens. Just yesterday, I was playing the trumpet along with my favorite musician, and decided to play this one, and it had been years since I even last listened to it. It really is a good one.

Staff member
Site Admin
Thread Starter
Here's the single edit for those that haven't heard it.