Thread Starter
Jumbo (aka Al Hirt) was a popular trumpeter of the '60s. His commercial peak was 1963-65 just prior to Herb's 1965-68 run. Jumbo was unique in that he was a trumpet virtuoso with an obvious command of the instrument essentially unparalleled in the "non-classical" world (other '60s virtuosi that come to mind are Booker Little, and perhaps Doc Severinsen and Clark Terry). While there is much to admire with Al's playing, for me it was his dead-center, rock-solid tone: aside from Booker Little, no other trumpeter truly moved me with such beautifully rooted tone as Jumbo. As my dad used to say: He sure makes it look easy. To me Jumbo's horn always sounded like it was an extension of his body -- which is how I think when I play. Although I'm less than 1/1,000,000th the trumpeter Jumbo was, when I feel that sweet spot in my embouchure and produce a metallically solid tone I always think of Al's guiding light.

The example here, from 1966, is notable for the unique solo guitar work, ghostly harmony vocals, solid bottom-end bone, and the cool 3-part harmony with that greasy organ at the end.

My Al Hirt bin overflows. I dipped in recently and pulled out what I think is the worst album he ever made. There may be one or two passable tunes on it. This isn't one of them.

On the other hand, I think this is his best.

Staff member
Site Admin
One thing that is remarkable about Al Hirt's tone is that he had incredible breath support. For non-horn players, breath support comes from the abdomen, not the lungs, and Hirt had incredible strength in that department. So in other words, it's not just a matter of blowing a trumpet loudly. My sax teacher demonstrated this to me--he feigned taking a jab at my stomach one day while I was playing, and my tone instantly firmed up.

I'm probably most fond of the Our Man in New Orleans album since it lays heavily on the N'awlins sound he was known for, and also includes Marty Paich's talents as an arranger for the rest of the horn section. It's a good time from end to end. Honey in the Horn is unabashedly easy listening with an Al Hirt twist, and I can't get enough of the hit track "Java." And despite it being a Dynagroove recording, it sounds really good. Latin in the Horn is also a heavy favorite due to Lalo Schifrin doing the arrangements, placing it a notch above similar albums he had recorded. "Baia" in particular is a favorite, as is "Gringo A-Go-Go" that opens side two--that tune sounded like a lot of fun to play.

And as I've featured here in the forum before, if you ever want to hear an Al Hirt song filtered through the Tijuana Brass a la "Green Peppers," check out his version of "Music To Watch Girls By." It is way more TJB-like than the Bob Crewe Generation version (which IMHO doesn't sound anything like the TJB aside from the trumpets). Sid Ramin's arrangement on this is inspired! It borrows the shuffle rhythm from "Green Peppers," and includes a marimba answering the trumpet in the verses along with a Pisano-ish guitar. Hirt even plays in a subdued tone a la Herb Alpert, and harmonizes much the same way.


The rest of this album is OK--Hirt does cover "Mas Que Nada" as well, immediately following the tune I just linked to.

Staff member
Site Admin
"Clarinet Marmalade" is from Our Man in New Orleans, leading off the album with a kick. Al's brother Jerry Hirt appears on trombone, and Pee Wee Spitelera on clarinet.

I too enjoy Al Hirt's music I own a few CDs which have all my favorites among them are "Cotton Candy" ( which I think was his answer to Herb's Whipped Cream) Music to watch girls by is also a favorite and a rare mid 70s album on the Monument label titled "Raw Sugar Sweet Sauce and Banana Puddn" I was fortunate to find a CD reissue of that dated 1991 it features a cover of "The Lonely Bull" but the entire album is worth a listen as I don't think he did much more recording after that. And it's pretty sad
A

Heard this song on an RCA Victor 2 albums compilation "America The Beautiful" (Let's Keep It That Way) in early 1972, "Wichita Lineman" (from early 1969 "Now")
A

Al did a duet with the late Ace Cannon on the remake of "I Can't Stop Loving You" (not sure which year).
A

Rudy said:
One thing that is remarkable about Al Hirt's tone is that he had incredible breath support. For non-horn players, breath support comes from the abdomen, not the lungs, and Hirt had incredible strength in that department...My sax teacher demonstrated this to me--he feigned taking a jab at my stomach one day while I was playing, and my tone instantly firmed up.
Click to expand...

Here's a photo of that abdominal support (with a young Ann-Margaret in 1963). 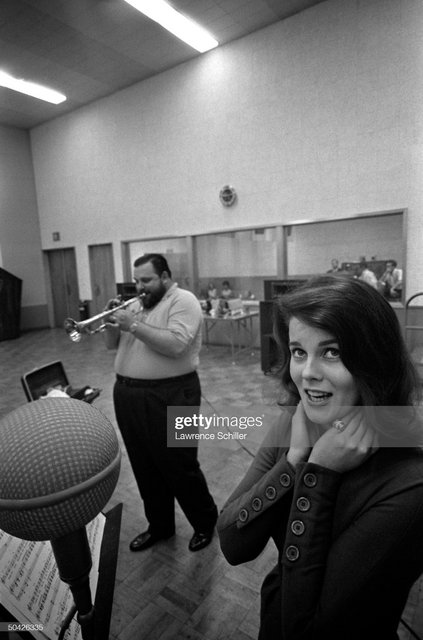 Music To Watch Girls By was from a TV commercial, was it Pepsi?...that album was for me largely a disappointment. I heard that Al turned down recording Whipped Cream before Herb. During some lean times early in their careers both Al and Pete Fountain took jobs as termite exterminators in the French Quarter. I can't find on You Tube but a very underrated tune by Al is The Sound Of Jazz And The Scent Of Jasmine from Jumbo's Gumbo LP. And that's all I know.
R

Al Hirt was a great listen back in the 60's and I still hear his music on one local AM station.
J

Wow! He WAS good!! I'm ashamed to say that while I know and heard about Al, I never really listened to his music; I thought that it was probably a bit "corny" or he played Louisiana music with a pop flavored sound with that zydeco beat which I've never really warmed to. But upon this listen, I see that he was really a great player. It's just tonight that I listened to his music fully in one setting. I mean I've heard snippets of his music like "Java" and his brilliant playing of the "Green Hornet" theme(the show comes on at 5:00 in the morning on the Heroes and Icons network; when I can't sleep I watch it to see Bruce Lee as Kato in action!)

His rendition of "Wichita" was incredible; he really soared on that tune, and I agree that his version of "Music To Watch Girls By" is very Alpertesque; I could see the Brass doing this and Rudy, you're right it sounds like "Green Peppers" complete with a Pisano sounding guitar, and also Wechter like sounding marimbas.

On a side note: I don't if you all know it or not, but Ellis(yes, that ELLIS)Marsales was a member of Al's band, and it was Al who gave Wynton his first trumpet! Wynton was a little kid at the time, and he claims that Miles was there when Al gave him the trumpet. Wynton said that Miles said, "nah, don't give the kid no trumpet; trumpet's too hard to play." Wynton said in the interview,"HAH! I showed him!" I like these little anecdotes!

Staff member
Site Admin
I think the "purest" of his RCA albums had to be Our Man in New Orleans since it sticks closest to his New Orleans roots. He also had a couple of live albums from the 60s or 70s in a similar style--those are what you'd typically expect to hear at one of his live gigs. At RCA, he explored a lot of concept albums, which seems typical of the era (trying different styles to widen his audience).

RCA's Our Man in... series would be a nice one to collect. These were not anthologies or hits packages--they were new recordings, all of which tapped into each performer's strengths. Others in the series included Our Man in Latin America (Perez Prado), Our Man in Jazz (Sonny Rollins), Our Man in Hollywood (Henry Mancini), Our Man in Nashville (Chet Atkins), and maybe a few others I'm missing.

Rudy said:
I think the "purest" of his RCA albums had to be Our Man in New Orleans since it sticks closest to his New Orleans roots. He also had a couple of live albums from the 60s or 70s in a similar style--those are what you'd typically expect to hear at one of his live gigs. At RCA, he explored a lot of concept albums, which seems typical of the era (trying different styles to widen his audience).
Click to expand...

I like the pop smorgasbord approach at RCA; however, you're absolutely correct about the live stuff: the studio LPs didn't represent what Jumbo did live. I once read a 1966 review of Jumbo in concert at the university I attended. The reviewer stated that it was one set "dixieland" (New Orleans style actually) and one set of "modern jazz" (which I'm guessing was probably akin to 1950s hard bop). I remember he wrote that Al's group was a sextet (though I don't recall if it was a 3-horn frontline or 2 horns + guitar in addition to drum kit, piano and double bass) and that their cover of Take 5 was quite lengthy and that the audience liked it -- I'm guessing Al opened up on the vamp ala I Love Paris that Bob provided above.

Staff member
Site Admin
I also like how he touched on various styles at RCA. They struck gold with Honey in the Horn (especially the hit "Java") and used that as a springboard for more albums to come. I've never tallied up all his RCA albums but in that era, it wasn't uncommon for RCA artists to be contracted for 2-3 albums per year.
B

Not only is this a wonderful performance but the sound quality always blew me away. I heard Hirt live on three occasions. In his own club early on, in Schaumburg Il with a trio, and finally in his last days on Bourbon St but in a second floor loft.

I had the above lp as a kid, and "Bourbon Street Parade" was a great song to loudly play on your Koss headphones.

Thread Starter
Hirt was a true jazzman -- his improvisational solos flow with ease: he was never at a loss to invent a notable melody.

Listen to his call and response with Andy Williams from this 1970 TV clip.

Al's moniker was "he's the king"--and so he was on the trumpet. Here is Al with a brilliant arrangement by Billy May of "Holiday for Trumpet". Billy May excelled at creating a driving big band sound and no one could arrange that way any better.

Talk about Billy May and his crisp driving arrangements--here is Billy's brilliant arrangement of one of Frank Sinatra's signature songs "Luck Be a Lady" from 1963.

lj said:
Al's moniker was "he's the king"--and so he was on the trumpet. Here is Al with a brilliant arrangement by Billy May of "Holiday for Trumpet". Billy May excelled at creating a driving big band sound and no one could arrange that way any better.

Staff member
Site Admin
I'll leave y'all with this. Al Hirt was classically trained, and he recorded an LP on RCA's Red Seal imprint with Fiedler and the Boston Pops. This is Haydn's Trumpet Concerto.