GaryAlan said:
I watched a recent PBS docu-special of the late Hank Williams (writer: Jambalaya, 1952).
I must say, what Karen and Richard achieved with Jambalaya is truly inspiring (I love their version).
It sorta reminds me of how the duo re-imagined/covered Please Mr. Postman--
of taking a classic and then "pop-ifying" it (yet, retaining elements of its originators).
Click to expand...

I know it was a song they already had in the 'bank' as it were, having already started it before they recorded Now and Then, so it was probably useful in terms of them not having to look for extra songs to fill up Side A. But having both 'Sing' and 'Jambalaya' on there was a mistake - they're both a bit twee and the kind of tracks that would turn off critics and more 'serious' music buyers.

^^I will concede that "serious" music buyers (and critics ) tend to downplay
the merits of both Jambalaya and Sing. But, I believe Heather was the big mistake to include on this album.
Partly , this is due to their earlier repertoire (great songs like We've Only Just Begun, Goodbye To Love, etc.).
But, if those critics had not noticed the duo by then, they never were going to take notice, so
songs like Sing or Jambalaya were not the "straw that broke the camel's back." !
Returning to the songs: In my opinion, even though they are not ballads, or particularly lyrically strong,
both Sing and Jambalaya are NOTEWORTHY.
Sing is BRILLIANT, as I have said time and time again.
Jambalaya was Carpenters' pop/country crossover before that genre ever became popular.
Those two songs are catchy and in their own way, on their own terms, satisfying.

Ive got to say that I have always loved “Heather.” It is gorgeous.

Staff member
Moderator
"Heather" IS gorgeous, but it didn't belong taking up valuable space as an album cut on a Carpenters album that was already somewhat bi-polar with the oldies thing on the second side. Another vocal should have gone in that place - maybe two! It should have been released on a non-album single, perhaps with just Richard's name on it, maybe just as a b-side. Think of how that would be a collectible today.
Last edited: Jun 27, 2020

By the way, I do agree--Heather is a beautiful piece. Problem is, I consider it to be "filler" for the Now & Then album.
Ask yourself (or, check the resource page): how often does Heather occur on other Carpenters' compilations ?
Additionally, Sing and Jambalaya are both fantastic CONCERT songs.

They were.....i was really looking forward to them performing them at my first Carpenters concert, spring 1973. The Now & Then álbum had just been released a few weeks before, and they didn’t disappoint. The crowd got into Jambalaya, singing along. They brought out a local children’s choir for Sing. It made the show as great as I had hoped. Great memories.
A

I’ve got a sentimental spot for ‘Heather’ because it was my Dad’s favorite of all the songs I’d play along with to the record as a kid. I’m sure my parents heard me play it a thousand times.

Anyway, it is beautifully done and really stands out from everything else they released during their career. Plus, we get to hear Karen’s drums in a totally different setting.

Lastly, Harry’s idea to have it as a b-side only would have been so cool!
A

As Carpenters recorded Leon Russell's 'This Masquerade' for 'Now and Then', Leon Russell recorded a version of 'Jambalaya' that same year for his 'Hank Wilson's Back Vol 1' LP. Therefore, by coincidence, Carpenters and Russell both released an album containing 'Jambalaya' in 1973.

While Carpenters' 'Jambalaya' was a hit in Japan, Leon Russell also had the song on a single there around the same time - although his was on the 'B' side of 'I'm So Lonesome I Could Cry'.

John Fogerty, of Creedence Clearwater Revival, also released an album in 1973 containing 'Jamabalya' - 'Blue Ridge Rangers'. His single version had appeared in 1972 and had been a Top 20 hit on the US Billboard Top 100, (credited to Blue Ridge Rangers). This is, no doubt, one reason why Carpenters didn't release their version as a single in America.

The three albums mentioned were all released in the year that marked the 20th anniversary of the death of writer Williams. Hank Williams, like Karen, died prematurely. He died in his late 20s from alcoholism and prescription medication abuse. His version of 'Jambalaya' had been a Number One US Billboard Country Hit in 1952, as well as a Top 20 pop hit.
A

There were various record releases and specials in 1973 marking the 20th anniversary of Hank Williams' death. I wonder whether that might have been a reason for so many artists recording 'Jambalaya', (and other Hank Williams songs), around that time. Record releases that year included, '1973 - 20th Anniversary Of His Death - A Tribute to Hank Williams', by Various Artists.

Hank Williams wrote one of the most evocative, desolate and sad songs ever, 'I'm So Lonesome I Could Cry', but it's good to hear Carpenters, John Fogerty and Leon Russell all having a good ol' hoedown on their versions of 'Jambalaya'.
A

Hank Williams' version of 'Jambalaya' was also re-released on single around the time Carpenters recorded the song.

John Fogerty's version of 'Jambalaya', (credited to Blue Ridge Rangers), peaked on the Billboard Top 20 in the first half of 1973.

Brenda Lee's 1973 album, 'The Brenda Lee Story - Her Greatest Hits', featuring 'Jambalaya', was a US Billboard Country Top 10 bestseller. To promote the album, she released a single of 'Jambalaya' that year.

Jesse Colin Young also had a Billboard Top 100 album featuring 'Jambalaya' in 1973. His LP featuring the song peaked at Number 51 that year. (Jesse Colin Young was the lead singer of The Youngbloods, who, incidentally, had the original hit with 'Get Together', the song recorded by Karen and Richard on 'Offering').

Multi-instrumentalist singer-songwriter Doug Sahm recorded 'Jambalaya' live in a concert broadcast on radio from the Bijou Café, Philadelphia, on the 21st of February, 1973. That same year, his 'Doug Sahm and His Band' album was a Billboard Country charting album, but didn't include 'Jambalaya'.

Fats Domino released a compilation album in 1973, including 'Jambalaya'. (He had a Billboard Top 40 hit with the song in 1961 / 1962). His 1973 compilation doesn't appear to have reached the American Pop or R&B Albums charts.

All-in-all, that makes a lot of 'Jambalaya' on American radio and in homes between 1972 and 1974, (and especially in 1973). On charting best-sellers on either album or single, there were versions by Hank Williams himself, his son, Hank Williams Junior, John Fogerty, (as Blue Ridge Rangers), Brenda Lee, Carpenters, Leon Russell, Jesse Colin Young and two versions by the Nitty Gritty Dirt Band - and there were probably others - plus, there was at least one charting tribute to Hank Williams.
A

Wow! Talk about a renaissance of an old chestnut country hit. Looks like Carpenters were definitely in step to include ‘Jambalaya’ on their ‘73 LP, ‘Now And Then’.
A

Karen's and Richard's dialogue from the July 1973 Valley Forge Music Fair concert that Billy Rees uploaded to Youtube gives us more information about their version of 'Jambalaya'. Karen says that they'd been performing it since half-way through 'last summer', which would mean mid-1972, that they finished the 'Now and Then' album in the first few months of 1973 and finally got to record the song.
A

What a strange coincidence. A few days ago, I posted about all the different versions of 'Jambalaya' on the US singles and albums charts around 1973. I also mentioned the 'Insights Into Hank Williams in Song and Story' albums by Hank Williams and Hank Williams Junior that charted in America in 1973 and 1974. A couple of days later, I walked into a second-hand music store and went to a small pile of cassettes for sale. What do you know... amongst them were 'Insights Into Hank Williams in Song and Story', Volumes 1 and 2. These have narrative by Hank Williams Junior between the songs, which I will be interested to listen to in the next couple of days.... although Hank Junior was only about three when his Dad died, so these aren't likely to be his personal recollections.
R 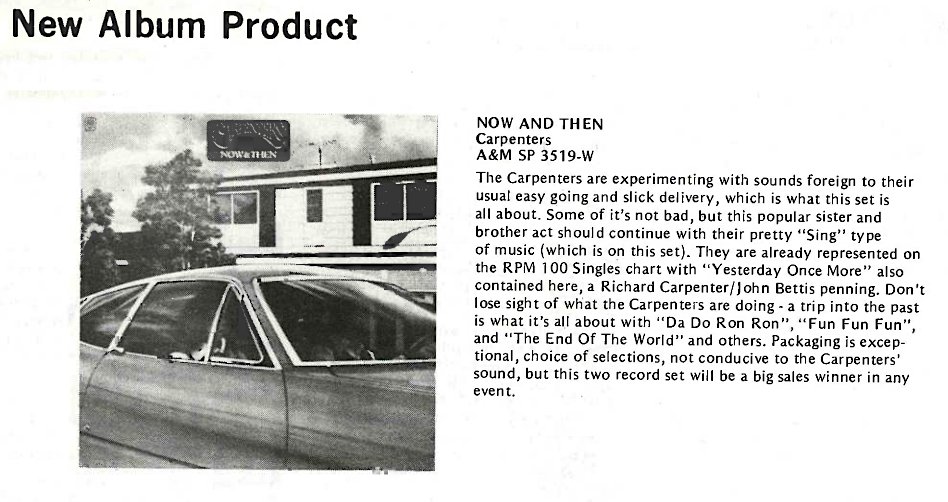 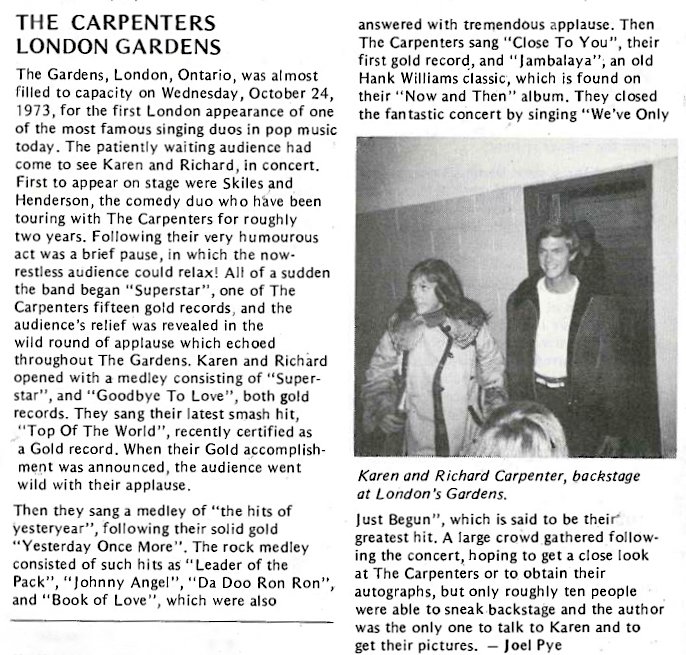 2-record set? Did N&T have a second disc that only reviewers got? Or was the reviewer confused because of the gatefold?

tomswift2002 said:
2-record set? Did N&T have a second disc that only reviewers got? Or was the reviewer confused because of the gatefold?
Click to expand...

Just what I was about to ask!

Staff member
Moderator
You mean you guys never got the second album? Too bad - it's a classic!

Harry said:
You mean you guys never got the second album? Too bad - it's a classic!

Classic as in more oldies?

It includes the unreleased version of "Poor Side of Town" with Richard's lead vocals. And their remake of the Marvin Gaye/Kim Weston hit, 'It Takes Two".

Also, You Don’t Own me and Leader Of The Pack.
R

If it doesn’t have Daddy Home, I’m out!!

Staff member
Moderator
Special photo on the innersleeve, too!

Mark-T said:
It includes the unreleased version of "Poor Side of Town" with Richard's lead vocals. And their remake of the Marvin Gaye/Kim Weston hit, 'It Takes Two".

Together we can make it baby
from the poor side of town...

Funny you should mention it, I like that song!

GaryAlan said:
A photo from the music score book for LP Now & Then
View attachment 686
Click to expand...

I have just seen this. Karen in those go-go boots. What a total BABE she was

!!
You must log in or register to reply here.