TimeWarp said:
I just listened with my Jabra over ear headphones (instead of my AirPods) and now I can hear Karen's voice in both channels.

In Yesterday Once More, the sound changes in the chorus when Karen sings "still shines" and when she sings "as they melt the years away". Maybe they were trying to achieve something with the overdubbing.
Click to expand...

This is why things like strings, additional (or alternate) vocals, keyboards, etc. pop up from time to time in places, unheard otherwise in the album and single mixes. It's not at all uncommon when producing a record to have certain parts recorded in places where there may be some uncertainty as to whether or not to keep it in the mix.

The quads will reveal quite often various places where Karen's vocals are either doubled (or perhaps an entirely different take left) on the master, and muted in the final 2-channel album mix. Again, hence the reason Richard was never a fan of these.

Staff member
Site Admin
Ad for NOW & THEN inside the promotional tour booklet: 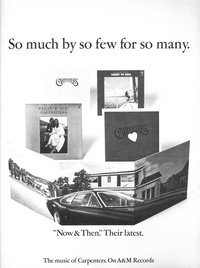 Here is a Quad version of I Can't Make Music. I own this quad LP album, but can't play it.
Anyway, seems to me that this is not 3:17 in length. Besides the alternate harmonica take at the end,
is the song also sped up on the quad version ?

GaryAlan said:
Here is a Quad version of I Can't Make Music. I own this quad LP album, but can't play it.
Anyway, seems to me that this is not 3:17 in length. Besides the alternate harmonica take at the end,
is the song also sped up on the quad version ?

Thank you for sharing! It definitely sounds like this tape is running a little fast. I don't believe my quad LP runs this fast.

New Music Express, September 22,1973 (page 17, UK magazine):
Excerpts...
"If it's muzak you're looking for, look no further...."
"The Carpenters are quintessential muzak..."
"Karen possesses the perfect set of vocal chords...absolutely no sense of feeling..."
"The arrangements are always dainty...."
"...sterilized for your own protection...."
"The Carpenters don't look like anything and this can only help their music..."

GaryAlan said:
Here is a Quad version of I Can't Make Music. I own this quad LP album, but can't play it.
Anyway, seems to me that this is not 3:17 in length. Besides the alternate harmonica take at the end,
is the song also sped up on the quad version ?

And, now it makes sense why Heather appeared on Now & Then album.
"...the increasing trend towards either instrumentals or extended solos..." (Cashbox, 1973).
Cashbox magazine June 2, 1973:
Picks of the Week
CARPENTERS (A&M 1446) Yesterday Once More (3:50) (Almo/Hammer & Nails/Sweet Harmony, ASCAP -R. Carpenter, J. Bettis)
"Needless to say, this will be another million seller for America's famous brother -sister team who have been delighting audiences for years.
Perhaps more powerful than ever, this hook will knock everyone out. Single is already charted. Flip: No info. available."
THE BIG THREE
1. YESTERDAY ONCE MORE-CARPENTERS
2. KODACHROME-PAUL SIMON
3. BOOGIE WOOGIE BUGLE BOY

Billboard November 3, 1973:
The "Now & Then" album and "Yesterday One More" by the Carpenters
were the best -selling LP and single, respectively, as of August 25, according to a Japan -wide record dealers poll conducted by "Record Monthly"
and announced in its October 1973 issue..."
T

I wonder why Richard didn’t continue the trend on “Horizon”?

I'm glad he didn't- but he made up for it on his second solo album.

The Weeknd’s new album, Dawn FM, uses radio as a narrative device. But he’s not the first to do it.
BY AL SHIPLEY
January 13, 2022

6. The Carpenters – Now & Then (1973)
"This may have been the first really popular work of ‘60s nostalgia. The entire second half of the brother/sister duo’s fifth album
was taken up by the single “Yesterday Once More” and an interlinked medley of hit songs from 1961-64, including classics by the Beach Boys, Bobby Vee,
and the Chiffons. Carpenters guitarist Tony Peluso plays the part of the radio DJ escorting you through the oldies, with Richard and Karen’s cousin
Mark in a cameo as a listener who calls into the station..."
Source: 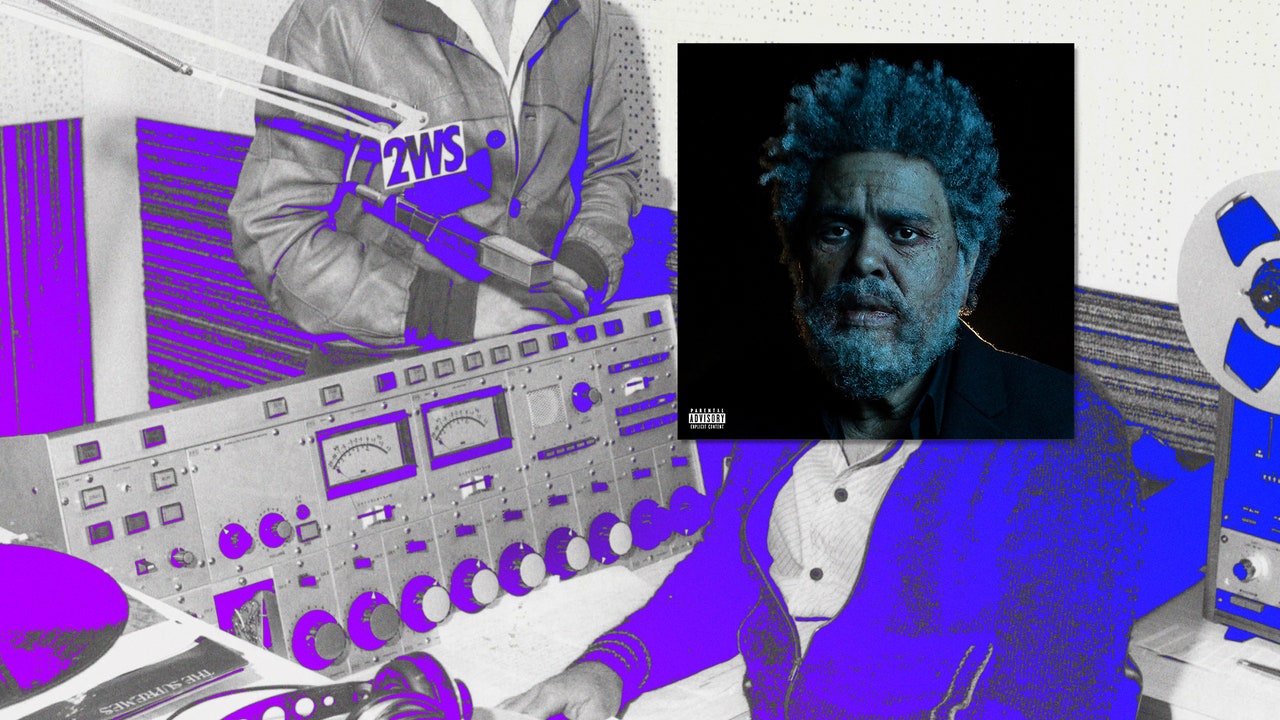 The Weeknd’s new album, Dawn FM, uses radio as a narrative device. But he’s not the first to do it.

Funny that N&T would come up fresh. I have been listening to Side Two a lot! Richard's vocals are great on it- and of course, Karen sounds incredible. Oh for a full-length version of Our Day Will Come. Classic.

Mark-T said:
Oh for a full-length version of Our Day Will Come. Classic.
Click to expand...

Yes! With a mid-song piano solo by Richard...guaranteed hit single...

Another great mix from this guy Mario, I’m wondering how many of these he’s done because he can even improve on the great remixes Richard’s done:

I must admit, this is an album I have grown to enjoy more and more throughout the years.
Having the 'road-group' perform as studio-musicians (Medley) gives this album the scent of a "live" album (one-take, side two).
Whether or not the song Sing is your 'cup-of-tea,'
if you really listen and dissect it musically, you might hear the stroke of genius of it !
Yesterday One More, what can I add to describe it, it's a classic.
The cover, had it been anything but a reinforcement of their "image" (whatever that term implies)...
this album cover and not the enclosed music might have played a small part in falling fortunes through the 1970s (in USA).
Just a thought.

Jambalaya...
Richard Carpenter:
"It's fun to listen to and fun to sing. That's why I chose to do it. It worked very well for Karen and the Carpenters' multi-harmony sound. "
Here:

I couldn't agree more with Richard !
You must log in or register to reply here.

Claims That Karen Carpenter Won Playboy Drummer Poll Are Probably False, But They Shouldn't Be