So after all this Passage talk I decided to get out my vinyl versions, regular, acetate, test pressings,British and Japanese vinyl, promos,etc. The acetate was sent out on July 26th 1977, 2nd ref. in pen on the bottom. Only difference I can hear is the longer intro to Calling Occupants. Test pressing says ok 9/8. The typed sheet on the cover reads corr. 8/29/77
Side 2, Band 4
Change In Timin
The g was left off.
Acetate titles abbreviated and typed label. It says Carpenters at the top. No album title listed. The white cover the same. No mention of Passage. Test pressing is white A&M label blank, gives album title at bottom of the page on the typed page attached to the blank cover. The promo versions are the same as commercial release but says promotion copy
not for sale in the musical notes area of the lp label. I have 1 in a plain white record jacket and one with the standard cover with a white promotional copy not for sale sticker at the bottom. A British import copy and the Japanese version has the large obi ribbon around it. Otherwise the same as American issues. I kind of forgot about all this until today. Glad you all got me excited about Carpenters again. Thank you.

So the promo copies to the stations were without artist name? If so, what a GREAT way to get them to at least listen to B'wana- and then be shocked (once AYGFLIALS comes on.)

I would never refer to LP Passage as unsuccessful.
The figures above (excluding USA) total to a minimum of 250,000 copies.
What are the USA sales of Passage ? Surely it is time to be certified Gold.

I never saw a gold certification in Billboard, but it must have gone gold by now. At least I hope so. It did not sell very well at all without a major hit single in the USA and only 8 cuts made it look short for a pop vocal album. By 1977 most record stores moved The Carpenters to the easy listening or vocals sections of the stores, away from the rock and pop areas or sections. It made them less visible and often hard to find when looking for their albums and CDs when browsing. So again less sales. I never did that. I gave them as much exposure as I possibly could, in the mainstream rock pop and soul sections , all in the same area alphabetically. They segregated R&B out as well, just like radio stations started doing around that time. End of the era.
Last edited: Apr 1, 2019

The white cover promos had no song listings or artist an the label and or cover. There often was a cover sheet taped or glued to the plain white album sleeve with that information. The promos that came later have the regular colorful Passage label on them, but say promotion copy not for sale written across the musical notes going across the center picture. I hope that’s more clear.
I believe I have Kind of Hush and Horizon ones too in test pressing sleeves.
R

I would never refer to LP Passage as unsuccessful.
The figures above (excluding USA) total to a minimum of 250,000 copies.
What are the USA sales of Passage ? Surely it is time to be certified Gold.
Click to expand...

It was unsuccessful at the time, failing to go gold. Its sales in the UK and Japan were OK, but still below those of their previous LPs.

Certifying requires providing proof of meeting the sales threshold and also (I think?) the record company has to pay a fee to RIAA to do so. Passage, along with Ticket to Ride and Made in America, clearly hadn't sold enough to go gold by 1998, when a number of Carpenters albums were recertified. Maybe it has sold enough in the 20 years since to cross the gold threshold (although we don't know how much it needed to sell in that time), but my guess is by not enough for the record company to go to all the effort of trying to get it certified.

^^I was baffled back in the day (1977/1978) as to the relative neglect of this album.
I recall mentioning the album to a friend in high-school. I recall the friend's response:
brushing the duo aside, before ever contemplating listening to the entire album !
That has always been my issue: If there had been a number one hit single (or #two, or three),
from the album, folks might have paid attention to the album.
But, without that BIG hit, the entire album was eschewed.
That is a travesty. It's a great album.
It may not be a great collection of top-ten-HIT songs, but,
what is there, is a beautiful example of Carpenters' diversity,
and Karen's vocal nuances.

I remember when I became a fan back in early 1998 the PASSAGE and MADE AMERICA albums were long out of print and selling for a pretty penny on eBay. Then I heard that their collection would be remastered. That was a happy day going into the music stores and finding the golden "Remastered Classics." I was like a kid in a candy store!

Here is where Carpenters landed on the Radio and Records Magazine
Year-end-issue (december):
The Pop/Adult "77" of 1977
#54 CARPENTERS /All You Get From Love Is A Love Song (A&M)
T

CarpentersToYou said:
I remember when I became a fan back in early 1998 the PASSAGE and MADE AMERICA albums were long out of print and selling for a pretty penny on eBay. Then I heard that their collection would be remastered. That was a happy day going into the music stores and finding the golden "Remastered Classics." I was like a kid in a candy store!
Click to expand...

Yeah I remember that as well. Not even the cassettes were available (as I think of it, my first studio album by the Carpenters was “An Old-Fashioned Christmas” which I found on cassette during Boxing Week 1997 at the local Kmart). Otherwise I remember my local record store only having listings for compilations like “Yesterday Once More”, “Interpretations”, “Christmas Collection”, “Christmas Portrait Special Edition” and the Singles albums. Of course, I guess in 1997 Polygram was probably selling off and discontinuing the older stuff knowing full well that the “Remastered Classics” were on the horizon.

The always glorious sound of Karen Carpenter and
I Just Fall in Love Again, taken from another vinyl album:

There's something just so glorious about vinyl.
Even the clicks etc, it's just so atmospheric. The experience of opening the record and removing the disc etc, i love it.
Was always such a bonus when the lyrics were printed inside or on the sleeve - you could sit and read them.
Always had a huge soft spot for passage ........

The PASSAGE entry on Wikipedia lists "Somewhere Out There" as track 3!!

GaryAlan said:
The always glorious sound of Karen Carpenter and
I Just Fall in Love Again, taken from another vinyl album:

What LP is that?

Rick-An Ordinary Fool said:
What LP is that?
Click to expand...

I’m sure this has been posted before. Here is where “B’wana” came from 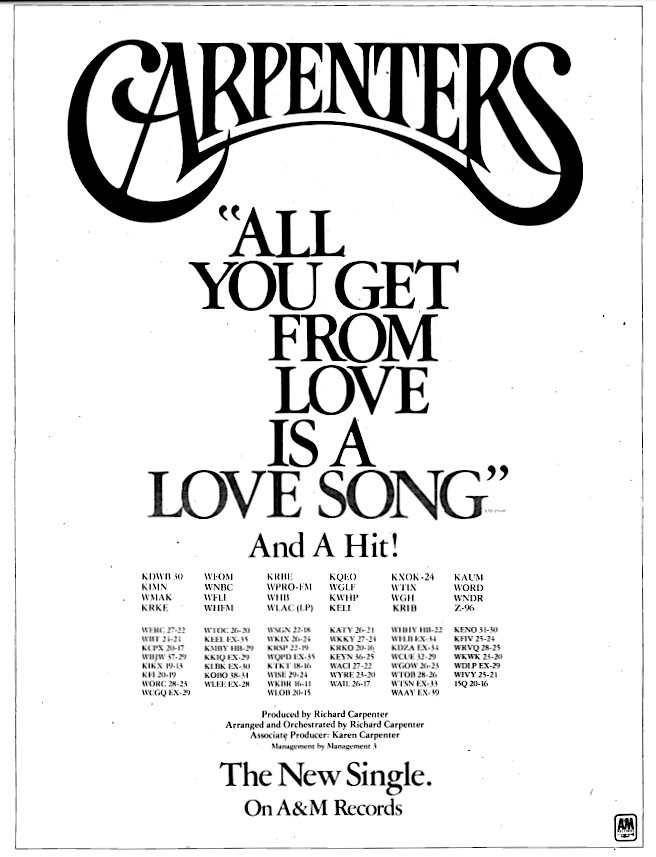 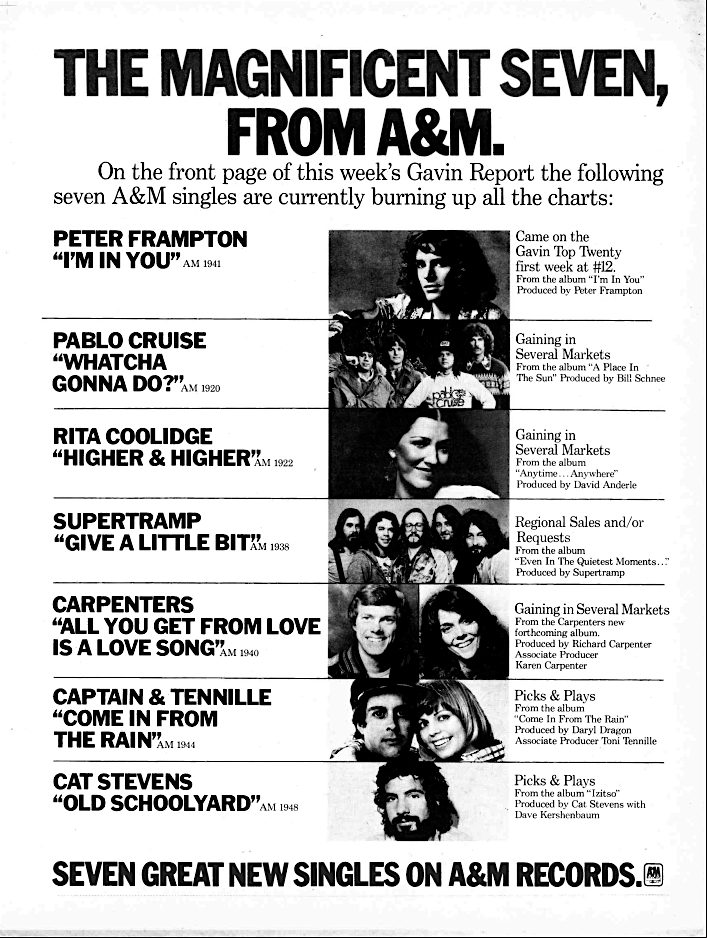 Staff member
Site Admin
Neat. I notice that there are no Philadelphia stations listed on that "All You Get..." ad. In fact, the on;y recognizable station on that list is WNBC in New York, and at that time, they were somewhat of an also-ran in New York ratings, unable to conquer WABC.

Not my favorite of their LP's, but I understand they were trying to grow into a new direction. My 3 favorite tracks are "Two Lives", "All You Get From Love Is A Love Song" and "Sweet, Sweet Smile". The LP was recorded beautifully, Richard was doing his thing well at this point, and Karen? She sounds wonderful on every track, I do think the arrangement on "I Just Fall In Love Again" was kinda boring. When I heard Anne Murray's version, I thought if Karen had THAT arrangement, they would have had a hit. Hated the beginning part of "Caseda"...but Karen sounds lovely on "Argentina"...A decent LP that gives you a bit of everything, they were trying to hit but in many ways had a miss. I do treasure every LP but I've never had a CD copy of this one. Funny thing is Jerry Moss asked them when they started recording "Made In America", he wanted them to go back to their "bread & butter" ballads...intresting

Karen Carpenter Fan 2012 said:
I do treasure every LP but I've never had a CD copy of this one.
Click to expand...

If you decide to get a CD, try to find an old A&M original from the 80s. Avoid the Remastered Classic. The A&M version is brighter than the muddy remaster and sounds more like the LP.

Harry said:
If you decide to get a CD, try to find an old A&M original from the 80s. Avoid the Remastered Classic. The A&M version is brighter than the muddy remaster and sounds more like the LP.
Click to expand...

I may do that being I am lacking of that one. I know, bad fan, but weren't the 1999 remasters supposed to be from the actual LP masters? I am glad there are people here who know the difference in the mastering quality. Thanks a bunch

Staff member
Site Admin
We've had a lot of back-and-forths in older threads about PASSAGE - maybe even in this very thread! - about how "B'wana..." sounds really muddy and almost mono in the remastered version. The A&M CD from the 80s sounds much nicer as far as the mud goes, but you'll hear even more stereo on the PASSAGE album and the 45 single where it's the b-side.
You must log in or register to reply here.