It's interesting how Polytel's catalog numbers for this album skip 8360753. I wonder if there was an 8-track version being considering for Columbia House and it was dropped, but not before having a catalog number assigned.

There are a few differences. The album only contains Touch Me When We're Dancing & Those Good Old Dreams from the 1980's, otherwise the rest of the album is all 1970's material. (Touch Me When We're Dancing was a #4 AC hit here in Canada, but it didn't hit the RPM Top Singles chart; Those Good Old Dreams hit #9 on the RPM AC chart, while Make Believe It's Your First Time was a #2 AC hit, and their last Canadian hit 45 Your Baby Doesn't Love You Any More #21 AC). Passage was their last studio album to hit the Canadian charts (at #57, it's last week was Feb. 4, 1978 when it was #93; of course, their last album of the 70's was A Kind Of Hush which was at #53 for July 31, 1978: Item - Library and Archives Canada), of course it's surprising that Those Good Old Dreams was included on this LP, when Make Believe It's Your First Time was clearly their "BIG" Canadian hit of the 1980's. Of course, their last charting Top Singles 45, I Believe You (which remained on the RPM Top Singles chart until January 20, 1979 when it was at #90) isn't on this album.

The record label on both LP's has the white label Polytel with watermark on it and a colored Polytel logo above the Carpenters logo, so it doesn't use the late-80's A&M black label.

Sound wise, it sounds like Polytel got some digital masters from A&M or high-quality analog masters. No idea who mastered or compiled the LP, aside from, in the dead wax area there is a tiny circle with a "S" inside of it. The dead wax also has the catalog number, minus the last digit, although it does have (depending on the side) -1, -2 etc for all 4 sides.

Staff member
Site Admin
Was the REMINISCING LP a two-disc set or something? The reason I ask is because the CD states in tiny letters on the back:

Usually it was the other way around. LPs held less total time than CDs, and there were some double-LPs that were shortened to fit on one CD. 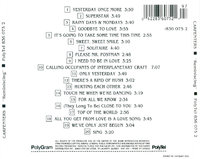 Thread Starter
Yes it’s a 2 disc set. The CD & LP have the same track listing, except on Record 2, Side 4 “Those Good Old Dreams” is inserted between “We’ve Only Just Begun” and “Sing”. So the LP has 21 tracks.
T

Thread Starter
Trevor Thurlow Productions (I have a photo of the back of the LP with the track listing. Also it's a single LP sleeve, not a gatefold, with plastic inserts for the 2 LP's).

Staff member
Site Admin
So then the CD was, in fact, shortened to fit on one CD. (Even though longer CDs later became more common.)

Interesting. I've had this CD for years and never noticed that verbiage in the bottom right of the rear. Might be worth putting a note in the Resource.

I remember when it came out. ....I was in shock as I was a new fan since Spring of 1988....and it came out via tv with commercials advertising it and I could actually see footage of them singing and mini video clips of it....I was in heaven!! Whenever it came on tv the person seeing it would yell for me (one of my siblings) and I'd come running to watch it....no vcr's in our home to record it...I wish...but still awesome to see it. Eventually the next year I bought the YOM Video Cassette....
T

Harry said:
So then the CD was, in fact, shortened to fit on one CD. (Even though longer CDs later became more common.)

Interesting. I've had this CD for years and never noticed that verbiage in the bottom right of the rear. Might be worth putting a note in the Resource.
Click to expand...

I like the CD version of this, it pays a little more homage to later material. While it excludes many things, it still is a decent representation of some of their great singles. Canada has gotten some interesting compilations! But south of the border........SOOL.

Staff member
Site Admin
The cassette version is listed on Discogs and contains the extra song.

Harry said:
The cassette version is listed on Discogs and contains the extra song.
Click to expand...

It should also be noted that Discogs, in error, shows the LP tracklist as having only 20 tracks, with "Those Good Old Dreams" omitted! The photos on the Discogs listing, however, clearly show that track on the back cover, and on the side 4 label.
T

Thread Starter
I just checked which version of Those Good Old Dreams is on Reminiscing vs the version on the 2002 Gold DVD. It is the single version that was used for the LP. It’s a different “whine” than the DVD. Of course, I must say the DVD version really sounds muted, almost like they took the audio from a VHS linear stereo track (not Hi-Fi stereo, the short lived linear stereo where they cut the linear audio track into two and compressed the dynamic range even further for the stereo channels), rather than a High Fidelity source. The LP sounds so much brighter and there’s more range to the music.

Staff member
Site Admin
I did note that. Whoever entered the LP info, copied the CD version as a template and forgot to fix certain things that aren't true, like a "glass master" from Cinram. Doesn't make sense with an LP.
T

Thread Starter
Yeah there’s no mention of Cinram on the LP. The closest is that the LP was manufactured in St. Laurent, Quebec, and that small circle with a “S” in the center in the dead wax.

tomswift2002 said:
I just checked which version of Those Good Old Dreams is on Reminiscing vs the version on the 2002 Gold DVD. It is the single version that was used for the LP. It’s a different “whine” than the DVD.
Click to expand...

The only known CD for the original version of "Those Good Old Dreams" is the UK YESTERDAY ONCE MORE. 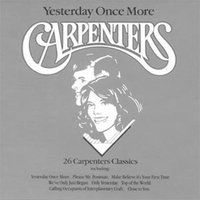 Harry said:
The only known CD for the original version of "Those Good Old Dreams" is the UK YESTERDAY ONCE MORE.
View attachment 5324
Click to expand...

I’m aware of that, but according the resource the “Gold” DVD uses the MIA album mix as well, but with reversed stereo. But it also appeared on the LP of the 1984 UK YOM, so I was wondering if Polytel had maybe got a hold of that mix.

Staff member
Site Admin
Yep, the DVD does too, but it repeats the opening riff, and then fades early.
You must log in or register to reply here.