Staff member
Site Admin
Thread Starter
Mention was made regarding the new Richard Carpenter SONGBOOK album that it was on the Decca Records label, and we pointed out that both Herb and Sergio have had titles on the Decca label. Sergio had a compilation in the EU in 2009 that was called (inspiredly!) THE BEST OF SERGIO MENDES. 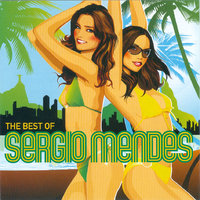 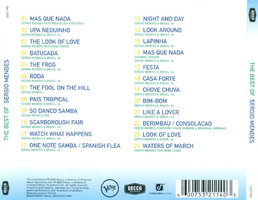 There are a couple of interesting things here, but it is just a compilation of tracks that most likely already have. The first thing is the inclusion of a few of the modern-day, hop-hop tracks. #1 and 3, and #22 and 24 belong to that genre.

So Danco Samba is the Sergio Mendes Trio version, and the rest all hail from the Brasil '66 era. (Pais Tropical is from '77, of course.)

Some a-typical inclusions here are from the FOOL ON THE HILL album. Most compilations include the "Fool / Scarborough" hits, but very little else from FOOL ON THE HILL. Here we have:
Upa Neguinho
The Fool On The Hill
Scarborough Fair
Lapinha
Festa
Casa Forte

Some of those have never been anthologized before.

Staff member
Site Admin
That's one thing that bothers me about the way UMe (Universal) handles the record labels they absorbed--they fling artists around to various labels on a whim, depending on whatever goes through their minds regarding marketing. So some of the A&M jazz releases ended up under Verve. Now, Decca is rearing its ugly head again. I'm glad that many artists I follow are on smaller labels and not on the majors.

Staff member
Moderator
Do "labels" even really mean anything anymore?

This particular collection is truly all over the map. It's kind of nice to see them giving some love to the Brazilian songs and not just sticking to the English-language well-known tunes that seem to populate a lot of the compilations. But nothing from Stillness, Ye-Me-Le or Crystal Illusions? (I'm not surprised they didn't include a Primal Roots track.) And they must not have access to the Bell or Elektra albums, although that's not a huge loss in the big picture.

Mike Blakesley said:
Do "labels" even really mean anything anymore?
Click to expand...

Not to the majors, and especially not to UMe. At least Sony Legacy tends to keep RCA's recordings on RCA, Columbia's recordings on Columbia, etc. The independents and the smaller label groups still honor that tradition, and some are so sacrosanct, like Blue Note, that any relabeling would probably result in a public lynching of EMI's executives at a jazz festival. Or something.


Mike Blakesley said:
And they must not have access to the Bell or Elektra albums, although that's not a huge loss in the big picture.
Click to expand...

Although it's telling that even though they have access to some of Sergio's earliest albums on Philips, including Dance Moderno, and those are ignored as well. It's like many out there feel Sergio's career started (and arguably ended) with the Brasil '66/'77/etc. group. If anything, he's another artist who could use a thorough career retrospective box set.
R

There used to be a box set called Collectible Classics on Amazon but it is currently not available.
It also seems to me that there was a box set of all his records from way back to more recent.

Staff member
Site Admin
Thread Starter
Serie Grandes Nomes was the career-spanning box set. It was released in Brazil, contained four discs of his stuff from the early days through the 90s.
You must log in or register to reply here.