That makes a little more sense GDBY2LV now that I have a better understanding of the actual article. However, Joni Michell still doesn't get a pass from me. Never heard of her until 1973 with the release of "Help Me" and I followed music fairly well as a teenager. I loved the Hardy Boy's books and always wanted to visit Frank and Joe's fictional hometown of Bayport as a kid but I just couldn't get into the TV series with Parker Stevenson and Shaun Cassidy!
Last edited: Aug 3, 2020

She wrote “Woodstock” for CSN&Y even though she wasn’t there. Her album “Blue” is older and considered her best by early fans. I agree that the “Court and Spark” album, with Help Me, is her commercial best. One of my favorite albums of all time. “Blue” is kind of depressing, but her fans really love it. We sold more copies of that album than any of her other catalogue titles over the years.
The article states in one section that it was the start of the singer/songwriter era..... hence Joni and Elton John in the picture mix.

UK Melody Maker Aug 14, 1971
Oops I see a major typo, was it an honest error by the writer, newspaper typo or could it be deliberate? either way sad. 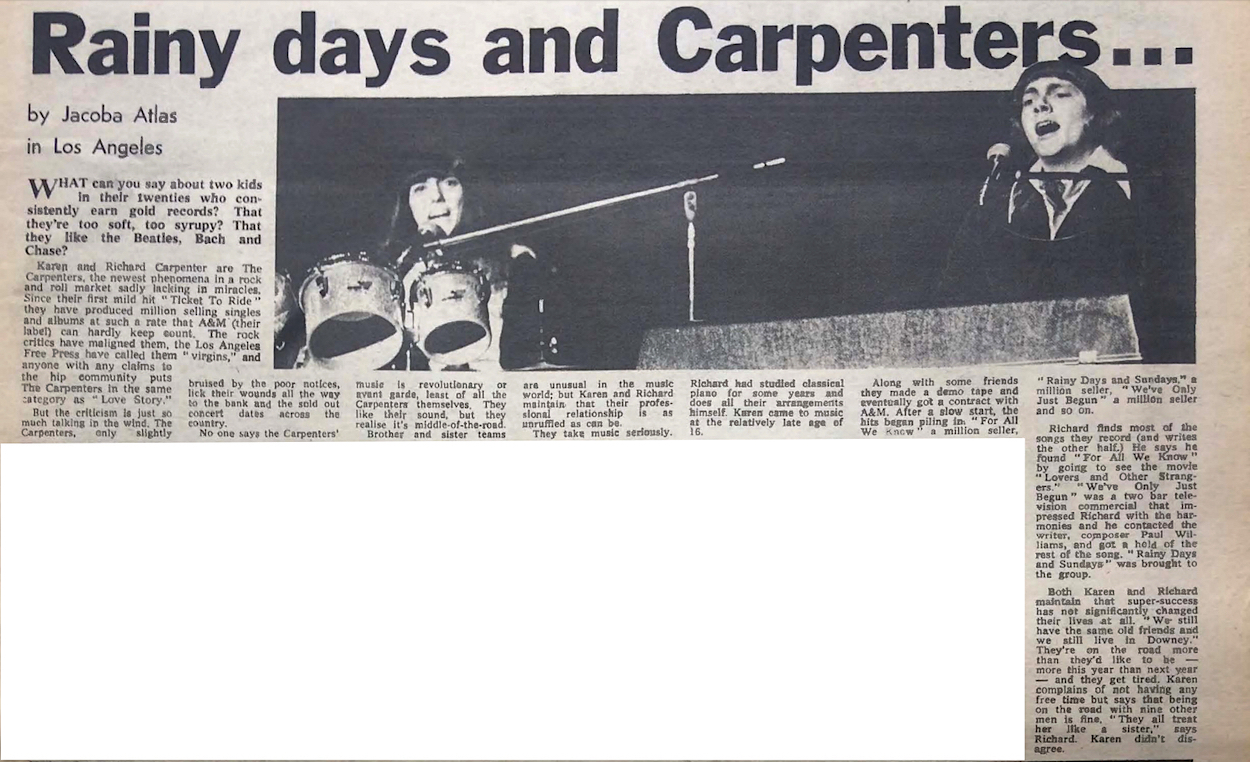 Portlander said:
That makes a little more sense GDBY2LV now that I have a better understanding of the actual article. However, Joni Michell still doesn't get a pass from me. Never heard of her until 1973 with the release of "Help Me" and I followed music fairly well as a teenager. I loved the Hardy Boy's books and always wanted to visit Frank and Joe's fictional hometown of Bayport as a kid but I just couldn't get into the TV series with Parker Stevenson and Shaun Cassidy!
Click to expand...

From 1969-1971 there was a FILMATION cartoon that ran on ABC based on the Hardy Boys. Filmation tried to repeat the success that they’d had with The Archies, but it didn’t happen. In 1970 the 2 singles from their second album “Wheels”, “Love Train/Good Good Lovin’” and “Wheels/Sha-La-La” apparently hit the American Bandstand Pop Chart.

Released 1970 by RCA/Dunwich I was just listening to this LP this afternoon. It was the 2nd of 2 albums by The Hardy Boys. The Hardy Boys were a fictional band based on the Hardy Boys books by Franklin W. Dixon. In 1969 Filmation acquired the rights to the books to produce a cartoon and a...

Carpenters:
I'm fully convinced that just as Brian Wilson of the Beach Boys and the multi-talented Burt Bacharach were the greatest music arrangers of the 1960s, in terms of transforming a song into an emotional experience; Thom Bell of Spinners/Stylistics/Delfonics/Philadelphia Sound fame and Richard Carpenter should hold that title for the 1970s.
We'll get to Bell when we tackle the Stylistics and Spinners in the S list, but now it's time for the Carpenters — siblings Richard and vocalist Karen, who perhaps had the warmest singing style in pop music history. They had so many top-10 1970s hits I'll tackle them one and a few at a time.
• (They Long To Be) Close To You: While Richard rearranged the Beatles' Ticket to Ride to interesting effect as a ballad on an earlier single, this song really showed what he could do. Close To You had been sung by Dionne Warwick in a version produced and arranged by its co-writer Burt Bacharach, and was also done by actor Richard Chamberlain. A&M Records co-creator Herb Alpert was offered the song to sing (his songs were usually instrumentals), but balked at the lyric, "so they sprinkled moondust in your hair of gold and starlight in your eyes of blue," so he offered it to Carpenters. Richard and Karen transformed the song into a tour de force, with Karen's wistful vocal, and extremely effective piano playing, strings and Beach Boys-worthy backing vocals performed by just Richard and Karen, multi-tracked. The song deservedly shot to #1.
• We've Only Just Begun: As great an achievement as Close To You was, this one's even more astounding, and is probably my favourite Carpenters song. This started life as a fairly routine song used for a bank commercial directed at young marrieds. Richard saw its potential and the result was the Carpenters song that has the biggest emotional effect on me, not only with Karen's intimate vocals, but the soaring harmonies. This song demonstrates what arranging talent is all about. This song hit #2, but it should have hit the top spot and stayed there for weeks.
• For All We Know, Rainy Days and Mondays and Superstar: All three of these songs are more understated than the previous two entries, which has the effect of highlighting Karen's stark and emotional vocals. Even more astounding, these songs (#3, #2 and #2) were all on one album, 1971's Carpenters.
• Hurting Each Other and Goodbye to Love: These songs are from 1972's A Song For You album, and why the Leon Russell-written title track was not a single itself I'll never know. Hurting Each Other is bouncy and cute, and doesn't quite have the emotional effect of the group's other hits. Goodbye To Love is not only highly emotional, but has a bruising rock guitar solo by band member Tony Peluso that apparently raised controversy at the time. Carpenters may have created one of the first power ballads.
• Sing and Yesterday Once More: Both are from the 1973 LP Now and Then, a sort of concept album with new songs on Side 1 and, mostly, a medley of redone oldies on Side 2. The former song, first featured on Sesame Street, is nice but hasn't aged all that well, while Yesterday Once More is my second favourite Carpenters song, not so much because of the emotion expressed but because of the confidence in the overall performance — you can tell the group is at the top of their game.
• Top of the World: This song is a major milestone in the career of Carpenters. Not because it hit #1, and not because of the song itself, which is a bit on the overly cute side. The song is supremely important because it showed the wisdom of Richard revising already recorded songs. Top of the World was originally a more country-flavoured LP track, and when artist Lynn Anderson had a big country hit with it, Richard was inspired to release it as a 45, with a more pop-friendly mix, not only as a single but as part of the massive selling Singles 1969-73 album. That same album had a new version of Ticket To Ride with a much improved mix and Karen vocal, and the single mix of Yesterday Once More with crucial added guitar stabs — as important to that song as the added horn stabs were to the single mix of Stevie Wonder's You Are the Sunshine Of My Life.
• Please Mr. Postman and Only Yesterday: Both are from the 1975 album Horizon, which overall was a peak in terms of sophistication in terms of arrangements and a peak of maturity in Karen's singing. Unfortunately, while their cover of the Marvelettes' Motown hit hit #1, as did the original, it was just too cute and jarred with the overall tone of the LP. The song was actually released as a 45 in late 1974 and should have been a standalone single. As for Only Yesterday, it's another supremely confident and soaring performance from all concerned.
Source:
Joel Goldenberg: The 1970s top-10 hits review part 9

Great article and gives well deserved credit to Richard's arranging talent. Would have been nice ifJoel would have at least mentioned that "Goodbye to Love", "Top of the World" and "Only Yesterday" were also written by Richard and John Bettis which would added another accolade to his musical genius.

Agreed with others here, very nice to see them get this kind of cred today, for their music back then. Thanks @Harry for posting.

This week’s line up:

GaryAlan said:
Hurting Each Other is bouncy and cute, and doesn't quite have the emotional effect of the group's other hits.
Click to expand...

While Joel Goldenberg's advocacy for Richard's arranging skills is more than welcome, his characterization of "Hurting Each Other" is rather jarring. When I think of a Carpenters' song that is "bouncy and cute" I'm much more likely to think of "Love Is Surrender" or "I Kept On Loving You," or possibly "Crystal Lullaby." The brooding verses and choral intensity of the choruses in "Hurting Each Other" seem to be almost the opposite of what he says about it...apparently Joel wasn't able to connect emotionally with a song whose chorus contains the couplet "Breaking each other's heart/Tearing each other apart." 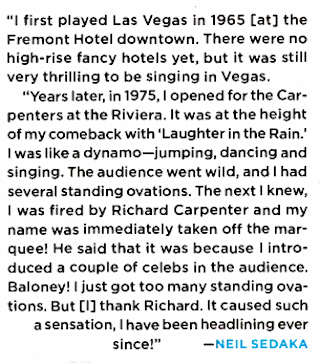 If your from the UK and wondered why you got a re-issue of Santa Claus/Merry Christmas Darling single 45 in Dec 1975 here is the reason.
Billboard Nov 15, 1975

Herb Alpert was offered the song to sing (his songs were usually instrumentals), but balked at the lyric, "so they sprinkled moondust in your hair of gold and starlight in your eyes of blue," so he offered it to Carpenters.
Click to expand...

It's kind of odd - I remember reading somewhere else a long time ago that Herb didn't like that lyric. But in more recent years, in more than one interview, he has said that he decided not to release his own version of the song due to his engineer (Larry Levine) telling him, "Man, you sound terrible singing this song." Maybe it was a combination of the two things, but in all the recent interviews he's never mentioned that lyric at all.

(The engineer was right..... if you listen to Herb's version, it was clearly a vocal misstep on his part!)

Staff member
Moderator
Herb's version is a little better than this: