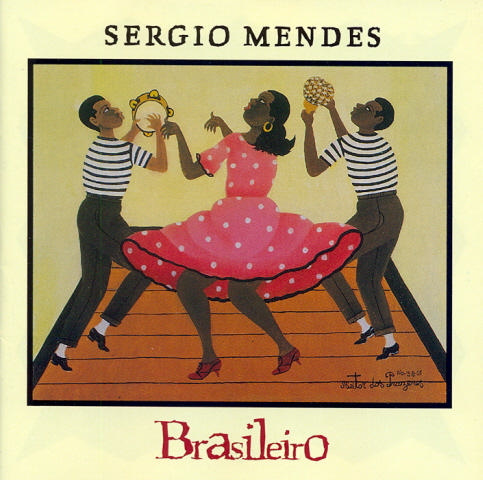 Following his '80s stint back at A&M, Sergio once again headed to Elektra for this one-off album, which was well-received and earned him a well-deserved Grammy.

Produced by SERGIO MENDES
Engineered by MOOGIE CANAZIO
Recorded in Rio de Janeiro, Brazil from 4/91 to 10/91, at Polygram and Som Livre Studios.
Overdubs at Castle Oaks Studios in L.A.
Mixed at Smoke Tree Studio in L.A.

Except: "What Is This?", "Senhoras do Amazonas" and "Sambadouro" mixed by BRUCE SWEDIEN at Smoke Tre Studio, in L.A.

Lua soberana was included on the soap Renascer soundtrack:

We would hear it dozens of times on TV back then, as the soap was being broadcasted.

Staff member
Moderator
This album is kind of a mixed bag, but I was glad to see Sergio putting his focus back on Brazil again and abandoning the American pop music styles that were all over his 2nd-period A&M albums. (Not that there weren't great moments on those records, but I digress.) If you look at the credits and read the booklet notes, you find that Sergio recorded the songs with a combination of Brazilian percussion players and vocalists, and on some songs, added American studio players to the mix. Some of these hybrids are terrific, others don't work quite so well -- in some cases the American touches make the music sound kind of dated.

The only tracks on it I just don't like much are the opening and closing percussion fanfares. I thought "Magalenha" would have been a great opening song -- I really like Carlinhos Brown's vocals on it.

Overall, it's a unique record in Sergio's catalog and a bit of an acquired taste, but well worth the "work" required in discovering the pleasures in it.

Staff member
Site Admin
Thread Starter
I had incorrectly dismissed Sergio for the most part after becoming disenchanted with some of the earlier Bell/Elektra efforts of the '70s, and it wasn't until connecting with other Sergio Mendes fans here at A&M Corner that my interest in his later stuff surfaced. Realizing that I missed a couple of decades-worth of his music back in 1997-98 or so, I set out one day to rectify the situation and headed out at lunch to a nearby used-record store to see what treasures I could find. On that particular day, I came up with three used CDs: Arara, Brasileiro, and Oceano - basically, his last three albums at that time.

I remember deciding on the way back to work to listen to Arara first, for the simple reason that it was an A&M release, and for the most part, I found it quite good for what it was. Next up, while sitting at my desk for the afternoon, I listened to Oceano, his most current at the time, and found it pretty good too, and I wondered why I had skipped these albums for all these years.

Waiting until the next morning to delve into the third of my new acquisitions, I put the disc into the player and was greeted with the drum overture to "Fanfarra". This was nothing like the simple jazzy studio recordings of the old Brasil '66 days that I so loved. It seemed very far removed indeed. It got a little better when the vocals arrived a full minute and a half in, but it still sounded miles away from the Sergio Mendes that I knew. It was even different from the two other new albums I'd just listened to and in general liked.

"Magalenha" started up and again sounded way different from what I expected. Here came those heavy drum sounds again with vocals very far back in the mix. "Indiado" began and there were more of the heavy percussive sounds to start out. A catchier melody began, and suddenly the album was beginning to sound more acceptable to my ears, though the only identifiable "Sergio" sound was a touch of Gracinha's vocals in the mix.

Then came the most aptly titled song on the album for me, "What Is This?". Indeed, I thought. What the heck IS this? More heavy drums. Poetry? Rap? Really? In 1997-98, rap was very far from my cup of tea. I still don't care for most of it, but have come to accept a modicum of it. In retrospect, listening to this track now, it's not nearly as bad as I once thought it was. But its early placement on the album was winning me over.

I was now 17+ minutes into the album. In the old days that would have been a whole side of an album, and there still wasn't anything that I was really grabbing onto. "Lua Soberana" then begins with a Gracinha-led chorus over a milder percussive and bass background. The song instantly grabbed me and I thought, "Finally. This is the Sergio Mendes I knew," and that track remains my favorite on the album to this day.

The album continued with another 8 or so tracks that were much more in the vein of the familiar - simpler songs with good melodies and that Brazilian feel that I loved. But those first few tracks were a bit rough for me and really set me into dismissing the entire album, enough so that to this day, it's received very few plays. While typing this reply, I'm listening to it and enjoying it much more than I ever did. Sometimes it takes me a long time to warm up to something like this, but I eventually come around. I won't be waiting as long for the next spin of Brasileiro - and I might even get the spelling correct from now on.

Sometimes it takes me a long time to warm up to something like this, but I eventually come around.
Click to expand...

Same here. I remember the first time I heard Primal Roots, thinking "Sergio...what HAPPENED?" Especially "The Circle Game," I just didn't like it at all. Now, almost 40 years later it's one of my favorite albums in his catalog and the only problem with "The Circle Game" is I have a hard time carving out 19 minutes at a stretch to listen to all of it at one time!
C

Moderator
I was never a fan of Sergio's pop covers over the years, and like Harry his 70's output made me nauseus. But I was at a record store and they were playing this CD, with "Sambadouro" being the song I first heard. I was pretty impressed with that tune and listened to a couple of others and decided to pick it up. I really loved the vibe on this album and really enjoyed Hermeto Pascoal's contributions. "Sambadouro" is still my favorite track, with "Kalimba" and "Pipoca" following. The GRAMMY for Sergio was well-deserved.