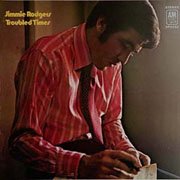 Jimmie's third and final A&M release is done with a different approach, this time recorded at Jimmy Bowen's Amos Recording, as opposed to your Al-Mo Recording

Amos and Bowen's Productions were also home for LP's by Dean Martin, Leslie Uggams and a short lived Glen Frey and John David Souther group, Longbranch Pennywhistle, who recorded one Self-Titled album on Amos (AAS 7007) then broke up, after the small label folded. After which, Frey then formed The Eagles. And even an early Kim Carnes album, REST ON ME (her debut) was recorded for Amos, (7016), before finding greater fame on A&M and later EMI. Billy Strange, the LP's arranger, has also arranged LP's for the likes of Nancy Sinatra. Chuck Britz and Eddie Brackett are very profilic engineers, too.

Having long recovered from his head injuries (12/1/67) after his rather mysterious beating, Jimmie seems to sound fresh as ever. This album is brimming over with a lot of excitement and ideas.

The jaunty "Troubled Times" opens the LP, and chronicles Yesterday as "The Good Ol' Days", and a rather troubling Today. You used to have better faith in mankind, as he would "Help you on your way", he says throughout the song.

The haunting "What Will We Do When They're Gone" is about what happens when your kids are grown like you are and ready to take on adult lives of their own. :| Something that seems to be disturbing MY parents, too.

"Seven Horsemen Came" is pulled along by a chorus, suggesting a Western Epic resembling The Good, The Bad And The Ugly, A Fist Full Of Dollars, For A Few Dollars More or Hang 'Em High--Clint Eastwood flicks currently released around that time, which that chorus, The John Bahler Singers has also sung on the soundtracks of.

The Lollipop Jingle of "Dum Dum Song" is about what you expect your children to do in the first place--Grow Up Right!

Before moving on and moving out , of course.

"I Do (Sometimes)" has a lilting refrain from the chorus. "Nobody really cares, but I do...Sometimes". A little bit more of the nostalgia from the old days, like on the Title-Track.

As you can see on the front cover, Jimmie is writing a song, while on the back, for those of you who own this album, he is looking at us and smiling with his guitar. And while he is known mostly for writing his own songs, (as he does more then ever on this release), he does cover versions of other peoples' songs, as well. (Two in this case!)

"Saturdays Only", written by Mike Settle, who also penned songs such as "I'd Build A Bridge", is delivered well by Rodgers, almost as if it were his own. And this whistful and sentimental ballad really can "Ease The Lonely".

"The Good Times Are Gone", done as a ballad on Jimmie's Second A&M Album, THE WINDMILLS OF YOUR MIND (A&M SP-4190), it is at a more faster tempo. Still a maudlin and moving piece, it is also still about an affair at its blissful and tearful end. Just a new way to convey it and backed by the singers make it more effective, though not happier.

"Woman Crying" seems to be an answer song to the former, or at least a message not to be too hard on the "Tender Gender".

This time it's a Mac Davis song, as opposed to a Rodgers Original and another not so merry moment, either. But Jimmie was always good at Singin' The Blues, too, so this is just another pleasant tearjerker.

"Baby Go Out And Play" is another role-playing psychological song, like "What Will We Do". This one is about a boy's mother foolin' around with another man coming to the house while dad is off on a business trip. And the boy constantly being told to "Go Outside, while Mommy is Busy"

. Just wonder if "Dad" ever found out what "Mom" was doing while he was away, or if he's been foolin' around, too.

"Gotta Be Another Way" is another typical Rodgers number that is fast & fun. In fact, Rodgers laughs toward the end. Just a bit about what a long drawn out afair life can be, and there must be another (and better) way to live it. "Working People Just Survive; Watching The Clock From Eight To Five"; Triying Just To Stay Alive" Good for those who can't live the life they like or like the one they live, I guess.

A trombone is heard through out and the laughter you hear at the beginning, is actually actor, Cesar Romero. Gee, why can't ALL Recording Sessions be THIS Fun??!!

In all, a pretty and moving piece of work and a shame that Jimmie never seemed to be heard from again, at least on record. And too bad around this time Amos Records and Productions folded, so not too many recordings emerged from them on the label or otherwise.

The John Bahler Singers, who are sometimes known as The Ron Hicklin Singers can be heard on countless albums by numerous artists. Usually the male members are Gene Morford, Ron Hicklin, Jerry Whitman, Ian-Fairbairn-Smith, Al Capps and Stan Farber, as well as Tom and John Bahler. There are also female members, such as Jackie Ward, Sally Stevens and Sue Allen. L.A. seems to home to such vocal groups such as these and employ them on lots of albums.

John does String Arrangements here and has on albums done on the Chelsea and sometimes Roxbury labels on albums by Wayne Newton, Lulu, New York City, Johnny Whittaker, Austin Roberts and others. And usually his voice can be heard multi-tracked or joined by others, including his brother Tom on albums by Ray Conniff, Hugo Montenegro, Alan Copeland, The Partridge Family and many more. Tom Bahler has been recorded for those artists, as well, and more often with the likes of Quincy Jones, Paul Williams, Shaun Cassidy, B.J. Thomas and many more.

More info on John Bahler and his brother Tom Bahler, also known as The Bähler Pages, can be found at the following site: www.zap.org/sunsetbl/

Staff member
Moderator
Thread Starter
Thanks much for an excellent review. My own info about post-A&M Rodgers is sketchy, but not long ago via ebay I obtained a copy of a double-LP from 1978, YESTERDAY AND TODAY. This was issued on the Scrimshaw label, a subsidiary of ABC -- another label you collect as I recall.
One disc is a reissue of the Dot label versions of some of his 1950s hits, including "Are You Really Mine," with the BMB playing in the background.
The other disc is (at that time) new material, including 4 of his own compositions.
I understand he had some tunes hit the country charts during the late 1970s, including a remake of "Secretly." During the 1980s he was sidelined due to complications from his previous injuries.
He has continued to write songs, and some have never been recorded to my knowledge, although they have been featured in his Branson, MO shows.
JB

LPJim said:
Thanks much for an excellent review.
Click to expand...

I'll admit I was not as sold on this LP, as the previous two Jimmie Rodgers did, at first. :| But I played a few bits of each cut at the record store I bought it at, on the turntable it had, and quickly bought it. It has been hard to pry of my turntable ever since.

I bought the other two earlier, at another record store after hearing "You Pass Me By" off FAMILY PORTRAIT and "The Lovers" off BANK AMERICA MUSIC BOX.

LPJim said:
My own info about post-A&M Rodgers is sketchy, but not long ago via ebay I obtained a copy of a double-LP from 1978, YESTERDAY AND TODAY. This was issued on the Scrimshaw label, a subsidiary of ABC -- another label you collect as I recall.
Click to expand...

And of course, My impulse! Jazz Series

LPJim said:
One disc is a reissue of the Dot label versions of some of his 1950s hits, including "Are You Really Mine," with the BMB playing in the background.
The other disc is (at that time) new material, including 4 of his own compositions.
Click to expand...

I don't have much Dot stuff, other than a Pre-ABC owned Billy Vaughn Singers album, SWEET MARIA.


LPJim said:
I understand he had some tunes hit the country charts during the late 1970s, including a remake of "Secretly." During the 1980s he was sidelined due to complications from his previous injuries.
He has continued to write songs, and some have never been recorded to my knowledge, although they have been featured in his Branson, MO shows.JB
Click to expand...

Ah, but does he have his OWN theatre?

His brother Tom Bahler owns Sequel Entertainment and has loaned his voice to Talking Dolls, Interactive Toys, Video Games, and even Play Stations.

Staff member
Moderator
Thread Starter
Jimmie Rodgers had a theater when he first got started in Branson known as the Honeycomb Family Theater. Subsequently he moved to the Imax, a more intimate venue.
Welk, Vaughan and Pat Boone all recorded for Dot, JR's label between 1962-67 prior to signing with A&M.
Dore Alpert's single "Tell it to the Birds"/ "Fallout Shelter" was distributed by Dot as well. Learned this by accident when I won the 45 in a GM auction. When it arrived - at first glance - I thought they'd mailed the wrong record!
JB