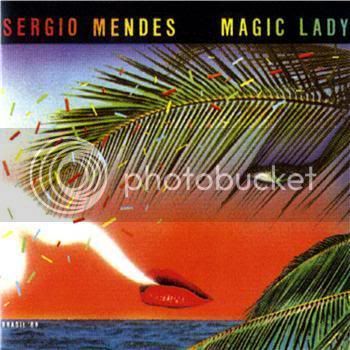 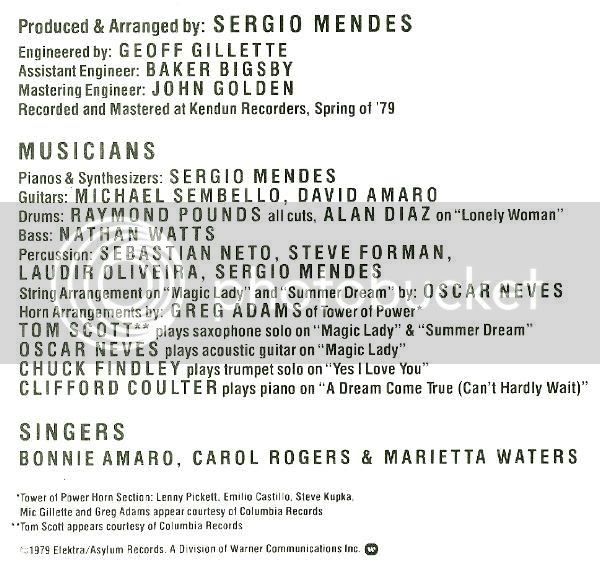 I easily took advantage of this being easy to obtain & not giving me the impression Brasil '88 gave me w/ the cover pic of Sergio standing between the two Boom Boxes or Brasil '86 gave me w/ the mosaic design, of which I took the years too literal in the sense that that's when the LP's were made or the music would be too advanced (read: "Too New" --Though that somehow didn't keep me from getting the self-titled return to A&M, but that was on the strength of it having "Never Gonna Let You Go")...

All that said, there is not a favorite track on this album that I have, & I probably never will...!

Easy to see why this failed frolic (or rather, a ridiculous gathering of Recording Studio Menchen) got paired by Collectibles w/ the sterile self-titled outing from 1975 on Elektra...

Staff member
Moderator
I guess you could call this a precursor to BOM TEMPO, Sergio's more recent danceable album, but this one has way less Brazilian influence and almost zero soul. This is easily my least favorite of all his albums. (It's amazing to think that the terrific and rare HORIZONTE ABERTO came out at the same time...Collectables would have done better to put out THAT album and leave this one in the history file.)

When the Collectables two-fer came out I gave this another listen, thinking maybe I'd find something to like in it by listening with "more experienced" ears. But I didn't like it any better. So it's now a curiosity on the CD shelf.

Staff member
Site Admin
Thread Starter
I remember finding this in a used bin back in the '90s when I wa strying to fill in my collection of Sergio Mendes material that I'd missed over the years. Each record or CD that I foound was an adventure of one sort or another, some good, some not-so-good, and this one fell into the latter category.

I gave it a listen and found nothing that was grabbing me at all. In fact, I found it hard to believe that this was really a Sergio Mendes album at all. The heavy discofied sound was dated and didn't interest me at all. So like some others here, I filed it away as a curiosity.

For the sake of completeness, I bought the Collectables two-fer, and don't think I even gave it a listen. Again, it was just a purchase so I'd have it.

Today, I faced the horror of needing to put this up as the Album Of The Week series I've been doing with these non-A&M albums, and I'd been dreading it. But to be fair, I dragged out the CD and album and gave it a spin as I was keying in the details, something I usually do. Still, I didn't want to waste time typing in the credits, so I scanned them instead!

As the album trudged along in its disco-era polyester path, I did indeed find two tunes that stood out from the rest. Coincidentally, both are side-enders, both were composed by the team of Sergio Mendes, Michael Sembello, and Gene Lees. "Magic Lady" is the lesser of these two, but still remains listenable in spite of its disco trappings.

Better still is "Summer Dream". sounding like a cousin of the theme to THE LOVE BOAT, it's an uplifting tune with nice harmonies. Definitely my favorite on this long-dismissed album.

I'm going to be in the minority here, but I really like "You Get Your Love" and "Yes I Love You." I got the LP; haven't used the turntable in a long time, but I may get the CD eventually. Just one of those things, I guess.

I do like "A Dream Come True (Can't Hardly Wait)" but overall MAGIC LADY has the feel of product dashed off and dumped on the market to end a contract. I don't think much of it. It was relased at the end of the disco craze and sounds like a tardy cash-in. It has both a cheap look and flat, hollow sound. I remember it was pushed back a few months from its intended release date.
S

This is an EXCELLENT album. Just because it's disco, people tend to have a knee-jerk "disco sucks" reaction. This is GREAT disco... very intelligent and complex, with nice rhythms and lots of soul. If you know anybody that likes the genre, but hasn't heard this (rather obscure) album, you could really blow their mind with this.

Personally, I think it's way better than his next ('80s "Yacht Rock") phase. I will, however, concede that the sound quality on the CD is pretty bad. Another record company needs to find a better source tape of this and do a Magic Lady/Horizonte Aberto release!

I mean, have you actually listened to this? Try "I'll tell you" or "Magic Lady". They're both terrific!

Staff member
Site Admin
Thread Starter
Welcome to the Forum, and it's nice to have someone in the Magic Lady corner. As I said in my little comments above, this album is often dismissed, but it seems it has its fan(s). Well now we know at least one more! The Collectables label release is a sonic mess. I do still like "Summer Dream".