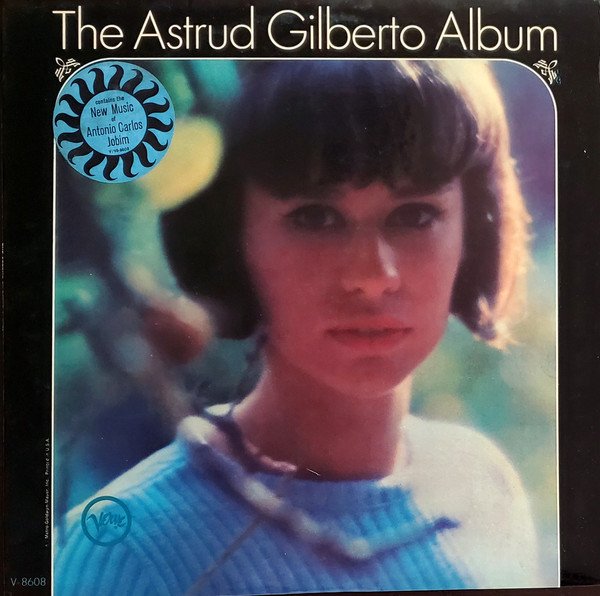 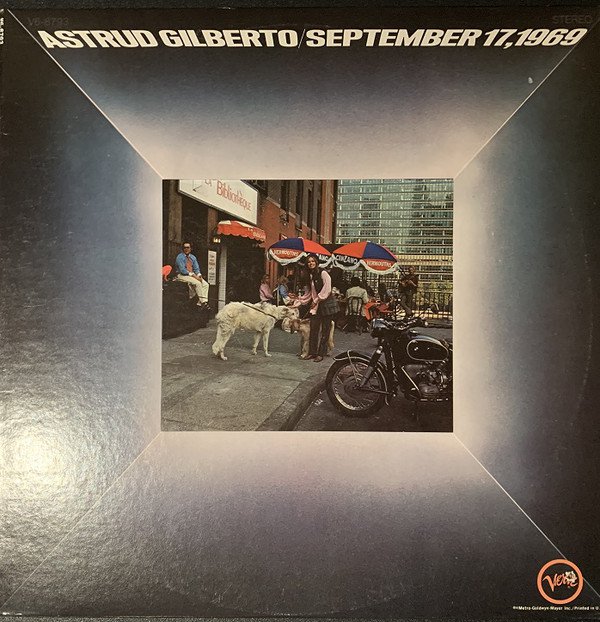 Thread Starter
For my nickel, her best is Look To The Rainbow -- owing to the presence of Gil Evans' charts.

My favourite is I Haven't got Anything Better to Do. By this time her singing is much improved. I also like the cohesiveness and intimacy of the songs. Then there's The Sea is my Soil -- very much in a blueprint version for Herb's Warm LP, which would be recorded in short order following the early 1969 release of this LP.

Staff member
Site Admin
I'm going to have to listen to some of these--I only have a few of the titles here, but the rest I'm sure are on Qobuz. I'm not a really big fan of her singing, so I'd be hard pressed to pick a "best" album. Favorite? Of the albums I have, so far it'd be The Astrud Gilberto Album and the Wanderley album, as there are a few tunes on there I really like ("Portuguese Washerwoman," "Summer Samba" and "Tristeza").

Staff member
Site Admin
Though of course I'd heard Astrud Gilberto through her big hit with Stan Getz, I'd never felt the need to explore further. Songs like "So Nice(Summer Samba)" would play on the radio stations I listened to, but I suppose Sergio and company were enough Brazilian-type music for me at the time.

Somewhere around the dawn of this forum and members began exchanging cassette tapes and early CD-R's, I got to hear A CERTAIN SMILE, A CERTAIN SADNESS with Astrud and Walter Wanderley. Later on, being intrigued by Astrud's voice, I began to explore some of her other albums. On CD, I acquired:

THE SILVER COLLECTION: this is a compilation of both THE ASTUD GILBERTO ALBUM and THE SHADOW OF YOUR SMILE plus 3 bonus tracks.
That was a West German-made compilation, and as I began to listen to it, I was appalled by the sound of the initial tracks. They were gritty and sounded really bad, but I liked the material enough to try again.

I ordered THE ASTRUD GILBERTO ALBUM again, this time a Japanese SHM-CD figuring they would be more careful in their mastering. No luck. Same noises, same gritty recordings, so I concluded that the masters must be damaged or bad from the outset.

Then, our Mr. Bill reported finding I HAVEN'T GOT ANYTHING BETTER TO DO in his Japanese shopping, and when presented with the opportunity, I grabbed a Japanese CD of the album.

I've not spent a great deal of time listening to any of these as they all seem to have the effect of soothing me, so I can't say I have a favorite one way or the other. But I do like her voice and presentation.

Staff member
Site Admin
@JOv2 What about the album with Stanley Turrentine? I can add that into the poll if you want...

Rudy said:
@JOv2 What about the album with Stanley Turrentine? I can add that into the poll if you want...
Click to expand...


Harry said:
I ordered THE ASTRUD GILBERTO ALBUM again, this time a Japanese SHM-CD figuring they would be more careful in their mastering. No luck. Same noises, same gritty recordings, so I concluded that the masters must be damaged or bad from the outset.
Click to expand...

I recall discussing this elsewhere, but I had the same issues. I went through 2 CDs and gave up. About a year ago I bought a VG++ LP stamped VAN GELDER (wanting my best to ensure a '60s issue) -- and Whammo! No distortion. The usual VAN GELDERisms aside, at least it's listenable.

And I'm actually leaning towards that as my pick for "best performance," mainly due to the more focused backing on this album, and some really nice covers ("Ponteio," "Vera Cruz," "Zazueira," etc. that cover Brazilian music without shoving her back to the Bossa Nova era) . Hearing Turrentine's horn is also a treat--it's not like he's all over the record, but contributes just enough. (He had his own Brazilian album, Salt Song, on CTi.)

I find the others can be somewhat uneven, except for the Astrud Gilberto Album which also seems consistent like the Turrentine set. Hard to choose since I've always liked the Wanderley set also.

The Astrud Gilberto Album and the album with Walter Wanderley were my picks. For her latter recordings it seemed like she couldn't decide on what genre to focus on as Bossa waned in popularity as the 60's ended.

Staff member
Moderator
I managed to find most of these on CD while I was stationed in Japan in 2008-9. I Haven't Got Anything Better To Do was a real eye-opener in how it clarified Herb's explanation of how Warm came to be. It was great to hear the first (or earlier at least) versions of a many Warm songs...

They are all pretty spotty in my opinion.

Silentseason said:
The Astrud Gilberto Album and the album with Walter Wanderley were my picks. For her latter recordings it seemed like she couldn't decide on what genre to focus on as Bossa waned in popularity as the 60's ended.
Click to expand...

That may be why I like the Turrentine album--it is more forward-looking and leaves behind the Bossa Nova.

Since GETZ AU GO GO isn't available here, I'll go with ASTRUD GILBERTO ALBUM & A CERTAIN SMILE (with Wanderley). Although I am fond of 3 or 4 of the other lps which include some favorite tunes like Manha De Carnival and Canto De Ossanha.

Staff member
Site Admin
Somewhat related, I put together my own Verve compilation. I wasn't about to carry several of Astrud's albums on an SD card when I only like a few tracks from each record--it's too cumbersome to pick through while driving. With this and the Turrentine record, I'm good. 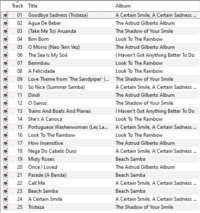 Rudy said:
With this and the Turrentine record, I'm good
Click to expand...

(Consider giving Lugar Bonita a spin -- a fine closure.)
You must log in or register to reply here.