Rudy said:
Mack David was Hal's brother. So the apples do not fall very far from the tree, it seems.

Bob Hilliard was another who wrote some early lyrics with Burt.
Click to expand...

I seem to remember reading that at some point that Mack and Hal were related.

rockdoctor said:
I seem to remember reading that at some point that Mack and Hal were related.
Click to expand...

I think I first saw mention of it in the Look of Love Rhino box set. At first I thought they were saying Mac Davis, but that was someone entirely different.
R

Rudy said:
I think I first saw mention of it in the Look of Love Rhino box set. At first I thought they were saying Mac Davis, but that was someone entirely different.
Click to expand...

That comment was once made on Kasey Kasem's American Top 40 back in 1972 when Baby Don't Get Hooked On Me was riding high on the charts. There was discussion about both writers and mistakes made in the names.

Staff member
Site Admin
Mac Davis brings back a lot of childhood memories--I remember he had his own variety series on TV, and there was a segment where the audience would give him song titles and he would compose something on the spot.
L

Thread Starter
Here is Jackie De Shannon's magnificent recording of "What the World Needs Now is Love". She had the perfect voice for this song. A powerful and timeless song by Bacharach/David--maybe their best. With Burt conducting and his arrangement--it's like icing on the cake. Burt used this song as an intro and finale to so many of his live concerts. How appropriate. On YouTube, Jackie's recording has over 6 million views. It is nice to know that other people appreciate quality music.

Staff member
Site Admin
It's ironic that a much-loved song like "What the World Needs Now is Love" was written as a protest to the Vietnam War. Hal had two sons and was worried about them being sent overseas to fight. "Windows of the World" is the same, yet even more subtle.
L

Thread Starter
Here is excellent background information surrounding the origin of "What the World Needs Now Is Love". Burt sure could arrange. I like the way he has the female vocalists so effectively backing up Jackie. An arrangement by Burt is instantly identifiable. The best in the business. 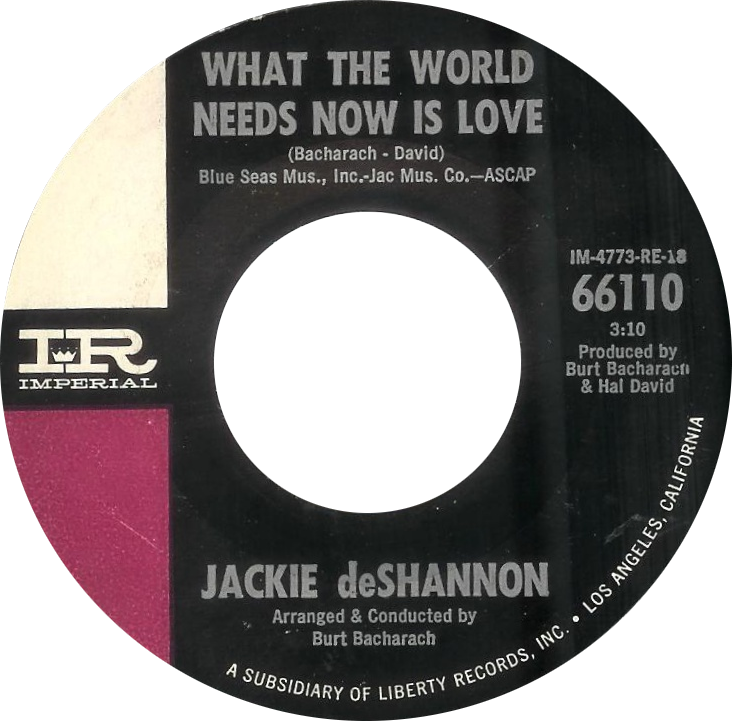 What the World Needs Now Is Love - Wikipedia

Thread Starter
Here is another huge hit for Jackie--"Put a Little Love in Your Heart"--from the Vietnam War period. I grew up as a teenager in the 1960s and I can't even count the huge number of pop songs that had a recurring theme of love and brotherhood as a reaction to that turbulent era.

Rudy said:
Mac Davis brings back a lot of childhood memories--I remember he had his own variety series on TV, and there was a segment where the audience would give him song titles and he would compose something on the spot.
Click to expand...

I first became acquainted with Mac Davis one night on The Tonight Show. In the chat, Johnny Carson commented that Mac had 14 songs in the Top Ten.
During Mac's song performance, he messed it up and said"That's what you get when you have 14 songs in the top ten." The audience roared but Mac said that he wanted to finish the song and he did. I later saw Carson's 14 song comment in a book of televised bloopers.
R

Rudy said:
B.J. Thomas had quite a run of interesting covers of Bacharach/David tunes: "Long Ago Tomorrow," "Send My Picture to Scranton PA," "Everybody's Out of Town," and of course the #1 smash "Raindrops." I haven't dug fully into his catalog yet to see if he has any others--his catalog in those Scepter Records years is as scattered as Dionne's is, and the album reissues are in shambles.

Jackie DeShannon had a handful also. "So Long Johnny," "To Wait for Love," "A Lifetime of Loneliness" and "Windows and Doors" were good cuts ("So Long Johnny" is probably my favorite cut of hers), and her version of "What The World Needs now is Love" is arguably the definitive version of that tune.

There's also Cilla Black's "Alfie" which outshines most of the others out there.

I don't believe it was a hit, but the Gladys Knight & The Pips version of "Seconds" (which was from the aborted film remake of the Promises, Promises stage production) I prefer over Bacharach's own, although they are both similar in execution.
Click to expand...

I looked at my copy of BJ Thomas Greatest Hits Volume 1 and there is no Bacharach songs listed. His Volume 2 Hits has three of the four you mentioned.

rockdoctor said:
I looked at my copy of BJ Thomas Greatest Hits Volume 1 and there is no Bacharach songs listed. His Volume 2 Hits has three of the four you mentioned.
Click to expand...

It seems that his time at Scepter was limited, and he re-recorded "Raindrops" almost identically for the hit Scepter release. But he went on to a lot more success in the country music genre, so I would understand if the earlier Bacharach tunes didn't show up on some of his hits anthologies.

Rudy said:
the Brasil '66 version is total rubbish, as the tune is not suitable to a trite pop song treatment.
Click to expand...

A little surprising and harsh coming from you, although I do prefer the Dusty's "Look of Love" too.

How about the late, great Gene Pitney's iconic Bacharach/David's compositions of "The Man Who Shot Liberty Valance", 'Twenty-Four Hours From Tulsa" and "Only Love Can Break a Heart", the last which I remember dancing to in 6th grade (and had never heard of Bacharach & David)...
Last edited: Nov 21, 2021
L

Thread Starter
In 1963 Bobby Vinton's "Blue on Blue" went to #3 on the Billboard Hot 100 chart--written by Bacharach and David.
L

Thread Starter
Right after the success of "Blue on Blue", Vinton went to #1 on the Billboard chart with "Blue Velvet". And interestingly, Bobby Vinton was the last recording artist to be at #1 on Billboard--with "There I Said it Again"-- just prior to the Beatles going to #1 on February 1, 1964 with "I Want to Hold Your Hand".
A

Rumer's 2016ish "This Girl's in Love" is a great album of Bacharach/David tunes!

Not a songbook, but a wonderful obscure Bacharach/David tune is "Winter Warm" by Kiz Harp. There's also a nice version by Gale Storm. A perfect song to play when the snow is falling in December.
You must log in or register to reply here.