Staff member
Site Admin
Thread Starter
This is one of my favorite Baja albums, if not my top favorite. I like that Julius took took the opportunity to stretch out into jazz with this record, vs. the formula he used on all the records from Fowl Play onward.

My original idea here was to replace two or three tracks that don't fit the theme of this album with others that sound like a better fit. Based on the tracks I like, though, it's difficult to find any that fit, since tracks like "Samba for Vicky" and "Jorjana #1" both use an upright bass which gives the tracks a totally different feel.

As others said in the AotW thread for this album, "As Time Goes By" sticks out like a sore thumb. "Spanish Flea" isn't quite as awkward but to me, it still doesn't fit. Both of these fit much better on Fresh Air or Those Were the Days, to be honest, as does "Left Field." One issue I have with some of the tracks prior to this album is that the flute is constantly mirroring the melody or countermelody--the flute is a trademark of a lot of Latin American recordings, and that is out of place on a jazz-like record. So are the "mariachi" touches like the guitar or bright brass flourishes, or the bass marimba on the earliest records.

A final consideration is the overall sound of the album--the earlier albums do not sound the same as everything from Fowl Play onward, so most of the tracks from the earliest albums don't fit. Likewise, the album on Bell sounds so cheap and atrocious that I don't listen to it often; a shame, since "Here's That Rainy Day" and "Ventura" almost fit the concept.

This is harder than it seems!

The new tracks I was considering including were:
So here's a tentative new running order and track substitution for the album. The opening track will be a surprise pick--it works surprisingly well as an album opener; so does the Side B opener, for that matter. Past that, I tried to preserve most of the original album's running order, as we're so used to hearing them that way. I've created a playlist in this order and so far, I'm liking how it came out. I may make a tweak or two before I'm done, but this is holding up well.

Figured I’d replace the undesirable tracks with non album singles and leave it at 5 tracks per side.

Rudy said:
"Spanish Flea" isn't quite as awkward but to me, it still doesn't fit.
Click to expand...

JOv2 said:
It would fit better as the last cut on the LP; so, use it as a night cap...some fun stuff tacked onto the end of side II.
Click to expand...

There's a good argument to do that also. (In the past days of the CD, it's something I'd have included as a "hidden" bonus track at the end of the disc.

I've heard the album close so many times with "We've Only Just Begun" that it's almost like part of my genetic code by now.

Rudy, your playlist is great. Just thought I’d add mine too because it was such a great idea.

TjbBmb said:
Rudy, your playlist is great. Just thought I’d add mine too because it was such a great idea.
Click to expand...

Perfect! I'm interested to see how others might change the original album, or even if they'd leave it as-is.

Staff member
Site Admin
I'm pretty happy with AS TIME GOES BY as it is.

Trivia: only one track from AS TIME GOES BY was ever digitized onto a CD. It's "We've Only Just Begun" on a 2002 Nichols/Williams compilation from Japan. 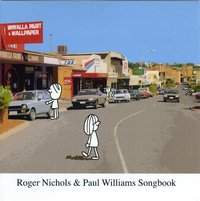 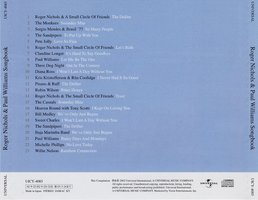 Staff member
Moderator
There's absolutely no way that "Man, That's Coffee" and "Can You Dig It?" would fit in with the tunes on that album. Makes me think you haven't heard either one of them. "MTC" was only released in Canada - Julius told me that it wasn't released here, as someone decided that it "wasn't good enough."

I have indeed heard both of them.

Steve Sidoruk said:
There's absolutely no way that "Man, That's Coffee" and "Can You Dig It?" would fit in with the tunes on that album. Makes me think you haven't heard either one of them. "MTC" was only released in Canada - Julius told me that it wasn't released here, as someone decided that it "wasn't good enough."
Click to expand...

Staff member
Site Admin
Thread Starter
I revised the playlist. "Here" just kind of laid there--the melody really doesn't go anywhere, and the arrangement is also a bit lifeless. It felt like the album ground to a halt.

I substituted "Gnu Bossa Nova" and it really perked up the running order. I also swapped "Wave" and "Think of Me" which leaves the three original side one tracks' running order intact.

Even if it isn't the album "reimagined," it'd be a nice compilation that emphasized more of Julius's jazz side. 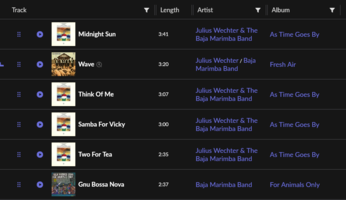 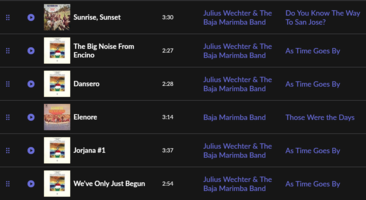 Here's a re-imagined artwork for this jazzier title: 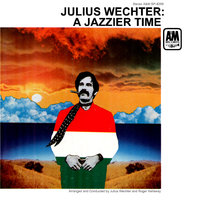 Here's a re-imagined artwork for this jazzier title:

Staff member
Moderator
I need to put that playlist together and give it a spin. It might make me appreciate that album more... haven't listened to it (in the original version) in a long time.
You must log in or register to reply here.