(Hard to imagine a goatee changing a man's looks to such an extent -- to me anyway -- but that surely seems to be the case. I recall one year in the '70s Herb was in the Hollywood Santa Claus Lane Parade and he had a moustache...and he looked very different.)

Staff member
Site Admin
I agree--the goatee was a different look, and actually, thanks to all the photos in Mexican garb, we didn't really know what he looked like without sombrero, cigar and a near-Fu Manchu mustache.

While this debut album doesn't possess the classic BMB sound, it does introduce it's nascent beginning and most importantly the template for future albums: some Julius originals, some covers and a fast/slow/fun mix of tunes. A home run for a debut album.

Gentlemen, I'm 99% sure the fellow on the far right is Scott Turner (born, Graham Morrison Turnbull).

According to his Wikipedia entry, he was hired in 1963 by A&M to write and produce. He wrote / co-wrote a few numbers for the first two BMB LPs including Comin' in the Back Door. His likeness is also present on the 2nd LP cover photo.

Staff member
Site Admin
I thought it was mentioned a long time ago that the extras in the photo were from the A&M offices, and that would fit if he were working with A&M at that time.

I love BMB,Maria Elena is a mexican song from Lorenzo Barcelata

I have always liked this song. The version by Los Indios Tabajares may be the most popular of the versions out there.

Me too in fact because the BMB version was the first I ever heard for me its the definitive version and it became more special to me in later years for personal reasons to me .

Staff member
Moderator
Having added this (A&M OR-4104) to my collection, I don't remember when, a quick look showed that A&M re-sequenced the tracks. My first version was the Ampex issued Double Play Stereo Tape (AMF 104), which had the first two Baja albums, in the vinyl album order. 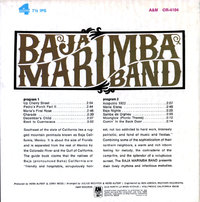 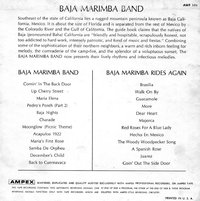 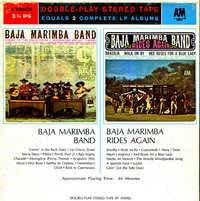 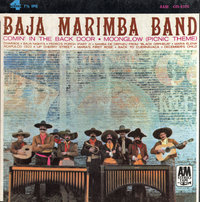 Staff member
Site Admin
That's an interesting resequencing--I've had a couple of various tapes (reels and cassettes) from back in the day and they would sometimes shuffle just a track or two per side in order to make the sides close to an equal playing time. Yet the two TJB tapes I had--Whipped Cream and SRO--were in original album order. And I remember after "Lollipops and Roses" that there was an extended silence of a couple of minutes. (Sadly that was one tape I rarely played--it was in such bad condition that pieces were breaking off any time I tried to load the tape.)
B

I, too, have that Ampex double play album. The slower speed muffled the sound and over the years it broke in many places.

Staff member
Site Admin
That was never a good playback speed, especially for mass-duplicated tapes. Storage makes a huge difference in how they survive though--I'd found several really good reels over the years, yet there were a few that had issues from poor storage. I had Stan Kenton's West Side Story that was similarly fragile, which was a shame since the one time I was ever able to get it to play, it sounded fairly good for a mass-duplicated reel. (Still not LP/CD quality but quite respectable nonetheless.)
You must log in or register to reply here.