audiofile said:
I used to get a kick out of that also. But now, I just think Charlie and Frank had two distinctive roles. Rhythm guitar played an important part of the Tijuana Brass sound, as well as the BMB. Julius probably just wanted Charlie Chiarenza to handle the solos and single note lines, while Frank always supported the band with the rhythm guitar. For Decaro's finest rhythm work in my opinion, check out Peru 68.
Click to expand...

Yes, and since there were 2 guitars playing simultaneously on many selections, the guitar-driven counter-point rhythms actually propelled the BMB to greater degree relative to the TjB. Early on, Herb probably issued a directive to Julius that the BMB's sound was not interfere with (or "challenge" -- in the case of the technically gifted Lee Katzman) the TjB. Ergo, the BMB has their sound of marimba(s) + flute (with dos driving guitars) while the TjB has its sound of trumpet(s) + trombone (with uno guitar).

It's also interesting to note that while the TjB began to recede from its !!Going Places!! -- ...Sounds Like... ('65-67) peak period -- the BMB was still ascending to new musical heights. Earnestly, with each subsequent issue, '67-'69, the BMB appear to continuously improve upon the current LP -- with their latter LPs offering their most cohesive music. Again, to my ears, the BMB were the most musically rewarding (and consistent -- there are no sub-par BMB LPs...which cannot be said of B-66 or the TjB during the '66-'69 runs) of the A&M-stable artists for the period.

My first BMB album. I have a nice, NM copy. One of the best cover designs of all time. Love this one start to finish. Superb sonics.

My first BMB album too! Didn't take too long in picking up the rest after that either.
The production, the arrangements, the classic sleeve... love it. 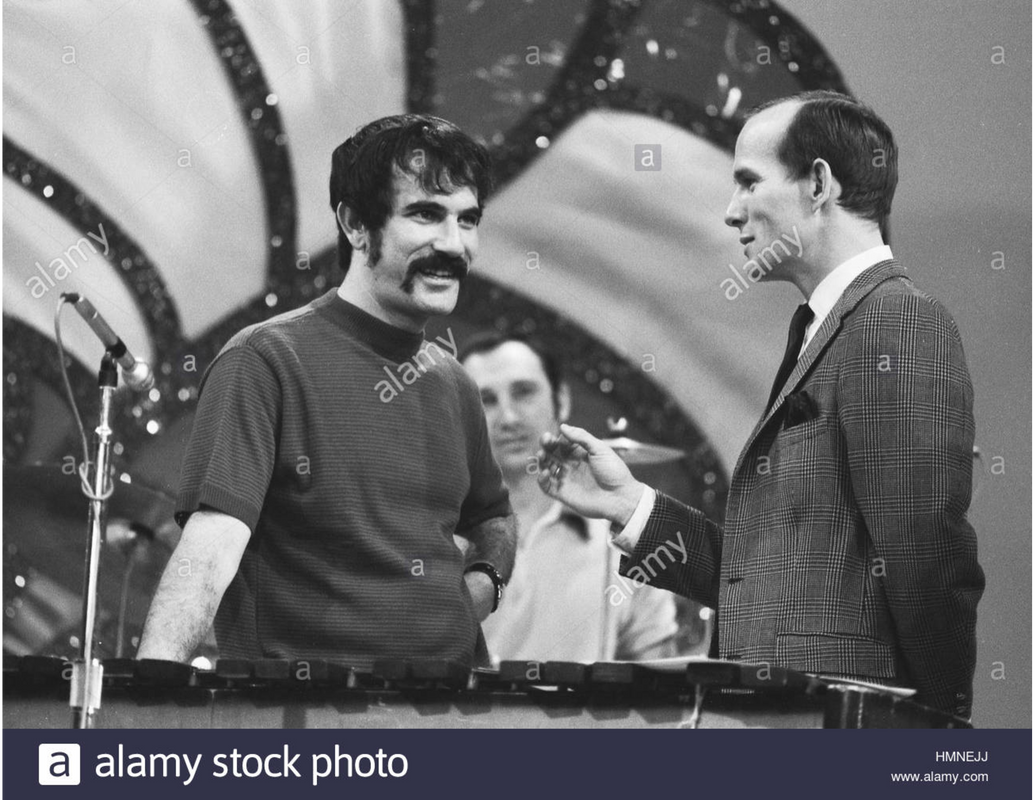 The Cover…
As A&M had recently moved into the old Chaplin studios, I’m going to bet that the cover photograph was taken in one of the sound stages (note the electrical conduit, which may suggest that particular facility was not wired for AC when built).

The familiar 9-member lineup now settled, the cover photo is laced with notable oddities: one of those well-known circa-1940s electrical fans famous for slicing into fingers; a circa-1967 houseplant (no doubt brought over from one of the adjacent offices), and an F tuba…attached to what looks to be, oh I’d say about a 5’ 10" 120 lb circa-1947 tall glass of water (wonder how that pose got past the sensors given the attire — or lack thereof). The cover photo processing quality itself is also of note as the colours appear attractively homogenized or muted (personally, I would have opted for a sepia tint on a b/w photo).

As for the BMB members themselves, DeVito’s holding a megaphone — suggesting he’s the vocal culprit on one of the selections. Curry, who apparently launched his BMB career with his cool, trademark hat, is the only member devoid of an obvious instrument (but what’s up with his mouth?). We get a look at Bud’s 12-string acoustic and I think Lee is holding a Martin Committee (man, those fetch a pricy nickel these days) — the East coast choice horn for sure. It’s great to finally see Mel’s presence. He looks to be the youngster of the group judging by the rear LP cover photos. The multitude of expressions contribute to the memorable cover and surely help to confirm that the BMB, as a bonafide ensemble, has at last arrived.

Watch Out! is an interesting LP. Side 1 heads out of the gates not much different than the preceding Watch Out!; yet, from Domingo (Side 1 #4) through to Baja Nova (Side 2 #4), it’s evident there’s a different musical fire burning as the ensemble begins to formulate its musical path…

With four strong originals present, Head’s Up! — more than any of the preceding BMB LPs — heralds a forthcoming eminence. As we’ll soon hear, the BMB’s benchmark of tight ensemble interplay will begin to pay endless musical dividends (relative to the TJB whose purpose is exclusively to support a lead soloist). Simply put: the expectation is evident that more musical flexibility is available to an inclusive ensemble where the whole is greater than the sum of its parts. In this regard, inevitable BMB—TJB comparisons, which begin in earnest with Head’s Up!, are more accurately characterized as an apples-to-oranges juxtaposition. While it’s true Julius is the principal, he never dominated the proceedings in a song-after-song manner a la Herb. The BMB was an ensemble to the letter.

Unfortunately, midway through 1967 the BMB would make one last personnel change…though not by choice.

Again this was a Tough one while I enjoy every track my choice for favorite was "The Odd One" the structure to me was a challenging but Good Listen and Given it was a Bud Coleman Original this song and his Participation on this album would sadly be his Last however I also like Baja Nova. Georgy Girl. Cabesa arriba.and all the others but as others mentioned This was a true Group effort and The BMB became more of a solid group and much less of a studio group

Staff member
Site Admin
Thread Starter
I found a large, large scan of the cover of this album which made for a nice Windows 16:9 wallpaper. Click on the thumbnail and then click the image again to zoom, then right-click and save.