Defining the Baja Marimba Band and its success story can be done two ways (if you need that many ways). Literally defined, Baja, Marimba and Band, taken in conjunction, can be said to be a "musical aggregation that plays the percussion-oriented music commonly found in towns and villages situated on the western peninsula of Mexico known as Lower California."

For anyone familiar with the Baja Marimba Band this is hardly a definition, more like an invitation to lunch.

The Baja Marimba Band is a merry group of nine musicians led by the incomparable marimbaist, Julius Wechter. They have delighted the devotees of the 'lazy' Latin sound by punctuating those languid rhythms with witty Dixieland, modern Rock and almost Jazz beats. From their records, concerts and television appearances they have accumulated an enthusiastic audience atuned to their happy blend, and like their A&M stablemates, the Tijuana Brass, they have followed their initial audio acceptance with one of the most popular visual acts on the national concert and television circuit. Their horsehair moustaches, fuming cigars, ill-fitting haberdashery (reminiscent of Wallace Beery as Pancho Villa) have perfectly created a scene that complements the merry and raucous humor of their music. One look at the covers of their albums should tell you that their attitude commits itself more to the robust than the retiring.

This fresh and happy music has carried the Baja high on the crest of national popularity and new horizons are being bounded every day. Here for your enjoyment, whether you be old fan or recent discoverer, is their latest, the fourth musical entertainment special; The Baja Marimba Band...WATCH OUT!

Finally, "Watch Out" is featured here which has long been one of my favorite BMB albums (not sure if it's my very favorite though... that nod may go to either "Heads Up" or the first album). But anyway, what a fantastic lp this is! My favorite track from their entire career is on this album, the Herb Alpert-penned "Tomorrow Will Be Better". The song, laced with a gorgeous melody and enticing chord changes is augmented by Julius Wechter's marimba and then finally by Bud Coleman's beautiful guitar solo in the third verse. The background vocals shift the sentiment of the melody into an aching finale on the final verse. My only regret is that through all these 40+ years, I could never find out if there were lyrics to this wonderful song. This is a record I play often...and other tracks such as the lively opener "Portuguese Washerwoman", "Telephone Song" and the group's great take on the classic "Ghost Riders In The Sky" are well worth many, many repeat spins! It's also worth mentioning that the album's cover picture finally sees the group taking shape with some permanent members that stuck around through the A&M years.

I had to vote for TOMORROW WILL BE BETTER as well...one of the prettiest songs Herb ever wrote; if there are lyrics, he and Lani should do this one as a duet. If there aren't lyrics, he should write some and then they should do it as a duet. That HAS to be Pete Jolly on the piano intro...it reminds me a lot of the piano intro to PRETTY WORLD from Herb's WARM album, which hints at a possible SHORTY ROGERS connection.

This album is at least a sentimental favorite of mine because it was the first BMB album I ever owned. It was a 12th birthday gift from my father, who wanted me to know that there were other acts out there beyond the TJB...and it worked. Soon, I was buying TJB, BMB, B66 and lusting after Wes Montgomery, Lucille Starr, Chris Montez...anything on the A&M label. When the Carpenters came along, I didn't have to think twice...if they were on A&M, they were great!

It didn't take long to figure out that Julius and Bud were not only BMB stalwarts, but also very important players in the success of the Tijuana Brass, as well. This record was the first opportunity for me to experience the depth of their skills. It's the only BMB album that I prefer to listen to as a whole...TWBB is my favorite track because it shows a softer, more pensive side of the group, more in the vein of THEY CALL THE WIND MARIAH and SHE'S LEAVING HOME that would follow in later albums.

SPANISH MOSS is a close second; it's the first piece of sheet music I ever bought...learned to play it when I was suffering through piano lessons as a kid.

Bobbyvox said:
"Tomorrow Will Be Better"...a gorgeous melody and enticing chord changes is augmented by Julius Wechter's marimba and then finally by Bud Coleman's beautiful guitar solo in the third verse. The background vocals shift the sentiment of the melody into an aching finale on the final verse.
Click to expand...

(For me, the song is a lonely tone poem illustrating the dusty chaparral and creaking coastal oaks of the Monterey-to-Santa Monica coastal area.)

A&M 803 Yours b/w Last Of The Red Hot LLamas - promo copy - note the
"as featured in" is the wrong album number; also the (5063) is a continuation
of the numbering from the Almo International singles, even though the BMB
45s were now issued on A&M.

A&M 8518 The Portuguese Washerwoman b/w The Cry Of The Wild Goose
Forget Me Nots re-issue 45.

Staff member
Moderator
Ahhh, for the good days when a record company would take out a full-page ad in Billboard just to announce a single. Although, since the biz is going back to individual tracks more and more, we may see that happening again.

Staff member
Site Admin
Hey! There's some dude behind the group facing away from the camera. Anyone ever notice that??

I like to think of this album as the Whipped Cream of the BMB. A pretty solid album, although not my favorite by any means.

I got Julius, Frank Devito, Frank Decaro (seated). I'm not sure who's next to Devito. Then we have Bernie Fleischer and Bud Coleman? Not sure who's on the end. Maybe Curry Tjader? Obviously we're missing some members here, because the fully formed band had nine members....

Staff member
Moderator
Thread Starter
I think we have 5 known band members as stated, two unknowns and one Jerry Moss as the 'whiz kid.'

audiofile said:
I like to think of this album as the Whipped Cream of the BMB. A pretty solid album, although not my favorite by any means.

I got Julius, Frank Devito, Frank Decaro (seated). I'm not sure who's next to Devito. Then we have Bernie Fleischer and Bud Coleman? Not sure who's on the end. Maybe Curry Tjader? Obviously we're missing some members here, because the fully formed band had nine members....
Click to expand...

I'm wondering if the guy next to Devito might be Mel Pollan? There are nine guys in the photo on the back cover, but the print is rather dark on my copy, and the faces are hard to make out. I think it probably is Curry Tjader on the end.

Here is my best guess as to the personnel. I think that the unknowns are members of the Wrecking Crew or other studio musicians who played on the Baja sessions. This picture was difficult as most album copies had a very dark picture, however, I found this one that was much lighter.

For comparison purposes, look at the above publicity photo taken in Washington, DC circa 1966.

I hope they had another coach to tour in, and that school bus just handled their equipment. I remember my family commenting on just how limber Julius must've been to pose like he did in the back cover shot.

Staff member
Site Admin
I voted for "Portuguese Washerwoman", though it's a tough choice. I like the Alpert tune too, and a number of the others.

A big thanks goes to Steve S. for posting this thread with his usual thoroughness while I was on vacation. (I seem to always be away on BMB weeks. Hmmm. )

Yours gets the top vote here, just edging out Portuguese Washerwoman. Its a solid lp, but certainly not their best.

I voted for "Ghost Riders" though the alpert-penned tune has grown on me over the years... I believe there are lyrics for it -- I'll have to dig through my files at home to both make sure I'm correct and to post what they actually are...

Moritat said:
Yours gets the top vote here, just edging out Portuguese Washerwoman. Its a solid lp, but certainly not their best.
Click to expand...

Except that by Chart standards, it was their best - peaking in the mid 40s if I recall. No other Baja album scored anywhere near this on the Billboard Album Chart.
C

Moderator
This album peaked at #54 in 1967, which was the highest charted BMB album. "Ghost Riders In The Sky" peaked at #52 on the Pop Singles chart that same year.

Another tough decision, because this is another outstanding BMB album with many memorable tunes. I had to go with "Gay Ranchero" because it's so quintessentially Baja, like "Juarez" from Rides Again. But like most everybody else I also really like "Tomorrow Will Be Better." Apart from the problematic "Acapulco 1922" from the first album, did BMB cover any other Alpert originals? I can't think of any offhand.

I'm going to say the BMB did not record any other compositions by Herb Alpert.

Moderator
While I realize the sentimental favorite tune is "Tomorrow Will Be Better" since Herb wrote it, I went instead with "Sabor A Mi", which got a lot of radio play when I was growing up. I heard some mariachi bands in Mexico play this as well a few years ago.

I'm Late to this one but I voted for "Yours" as I first heard it on Greatest hits but I also Liked Ghost riders in the sky. Tomorrow will be better. And several others its tough to choose any favorite because they are all good but I opted for my personal Standout
B

It's also the worst cover they ever had. 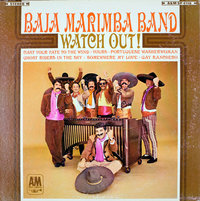 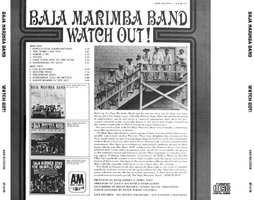 bob knack said:
It's also the worst cover they ever had.
Click to expand...

Yeah pretty bad. Like a high school band photo. It’s too “polite” looking.
You must log in or register to reply here.