Thread Starter
Hindsight is always 20/20 I remember seeing low budget tjader compilations in the cut out cd bins over the years I actually bought one at Sam Goody in 2001 a couple years before it closed here where I live the title was Soleil and come to find out it had almost all the songs from Tjader sounds out Burt Bacharach they left out Money penny goes for broke ( which I like) and several extra songs included Armando Guadjira .Milo's other samba .Nica's Dream. And Armandos Bossa. They sounded louder than the original versions and believe it or not the CD sounded good to me but after awhile I discovered the Tjader Bacharach album was available on CD on the Dcc compact classics label so I immediately purchased that to make it complete. The label was Excelsior and the copyright on the disc was BCI music and the date 2000. I still have both cds I don't know if the Soleil disc is an unauthorized counterfeit or not but it's an interesting curiosity in my library such are the joys of collecting.

Staff member
Site Admin
Knowing Universal owns Concord is disturbing. They would rather reissue the same Stan Getz records year after year, but ignore everything else. I just read an article from a couple of years ago, saying Verve had pretty much got A&M'ed, where most of the staff was laid off and the rest were rolled into that Interscope label.

Universal is systemically ruining what's left of any classic labels that fall under their control.

Rudy said:
Knowing Universal owns Concord is disturbing. They would rather reissue the same Stan Getz records year after year, but ignore everything else.

Universal is systemically ruining what's left of any classic labels that fall under their control.
Click to expand...

I couldn't Agree more Rudy or Have said it better myself Spot on.

Staff member
Site Admin
On a more happy note, from 1953: 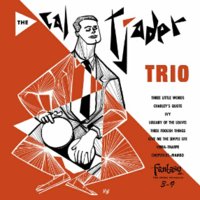 This was Tjader's first recording for Fantasy, on a 10", 8-song LP. It features Vince Guaraldi and John Marabuto on piano (separate tracks), Jack Weeks on bass, and Tjader on vibes, drums and percussion.

This is the reissue from a couple of years ago, pressed in transparent orange vinyl. 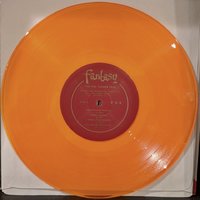 On CD, this record, plus another Tjader album, were released as a two-fer called Extremes, featuring his first and presumably final albums for Fantasy (that was Breathe Easy on the Galaxy subsidiary label). 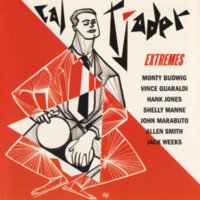 Staff member
Site Admin
I was thinking that myself--the classic dark red Fantasy vinyl color would have been perfect. I think they were attempting to match the color on the album cover, but even there it's too orange. Can't complain though, it sounds good.

I have the red vinyl reissue of Mambo With Tjader from many years ago, but the red is too bright. (And the record has some strange mastering to it. Thankfully I didn't pay for that one.

Here's the same 10" in the proper red color that I remember (and it appears the reproduction forgot the "long playing microgroove" at the bottom of the label): 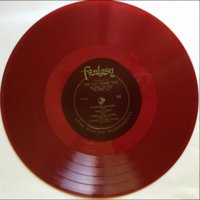 I have never seen one of the stereo blue-vinyl Fantasy records, but I just now found Cal Tjader's Latin Concert on Discogs. 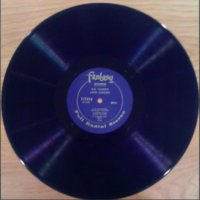 It seems the original 10" also came in blue and green versions (as it shows the 1953 release date for these): 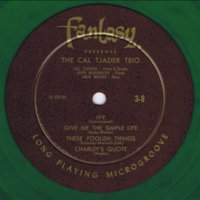 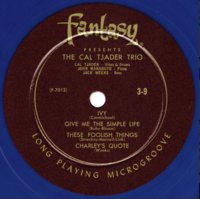 Thread Starter
Man Those are All Beautiful Discs although the Red and Blue ones will forever Be etched in my mind as the original Fantasy vinyl the more important thing is the sound However one thing still puzzles me I Have the Black Orchid CD which features Two LPs one of them which my mom owned was The Cal Tjader Quintet from 1956 which had Flamingo. Laura. Pete Kelley blues and A Killer version of George Shearing's Lullabye of Birdland the CD version of that two far was in Mono as my mom's vinyl was but I was aware of a Stereo version of it but I could never track one down I've seen the stereo listed on discogs and since it was released about the same time as Latin Kick which I have in stereo i Can't Help But Wonder why wasn't The stereo versions of the songs from The Quintet L.p. used on Black Orchid? I would have love to have heard what The stereo mix sounded like.

Staff member
Site Admin
I think I can guess at what happened with The Cal Tjader Quintet.

The original release date was 1956.

The Westrex stereo cutting head for LP mastering lathes didn't come along until 1958. True stereo recordings were starting to be made prior to that, and a very few were sold as tape (such as RCA's Stereo Orthophonic classical recordings), usually with two microphones recording an entire orchestra (and later, three mics), which picked up a large soundstage between and around the stereo image.

I have a feeling the Quintet album was cut to 2-track, as was possible back then, with a group of instruments on one track, and a soloist or just a couple of instruments on the second track. You can hear this on the "stereo" version of "Mamblues" from Cal Tjader's Greatest Hits. It is not a true stereo version, but more like releasing a two-track master tape as stereo, which was never intended to be recorded/released as stereo, with some reverb added to sort of blend things together. (Similar to how the early Beatles two-track masters were cut to vinyl which had all left/right content.) The original version of "Mamblues" from Mambo with Tjader is in mono, the two-track master having been used to mix down into mono.

The release date of Quintet in stereo was 1962, six years after the original release. My guess is Fantasy wanted a stereo product out there, and released it similarly. And not coincidentally, Mambo with Tjader (1955) was also reissued in "stereo" in 1962 as well. 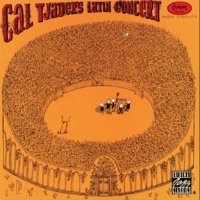 It was always fun trying to find the topless lady in the one above.

Bobberman said:
....so it looks like I'm not missing much as the stereo versions were actually UNMIXED TWO TRACK MONO as opposed to true stereo.....
Click to expand...

That is it! It appears as though a few of his early records were released like that. I'm thinking his album with the West Side Story cuts on it was the same, as everything is left/right on that record also.

Thread Starter
At least I'm glad I was able to get most of his Early Fantasy albums on CD while they were readily available and especially at a time when CD prices were Going down to the point it seems it was almost like buying Vinyl at 80s prices it was the period between 2002 and 2011 When I was really on a CD buying spree and I still have everything as well as ripped into my 936 GB Laptop ( and I still have over 620 GB still availible) nevertheless even though The CD format is Fading into the sunset at least here At Casa Bobber they are still functional and being properly Cared for with the added benefit of Digital storage
You must log in or register to reply here.

What are your all time favorite Jazz recordings and artists?
3 4 5