Thread Starter
Someone showed me yesterday a CD copy of the 'Carpenters' (Tan) album on the Spectrum label, which I used to have and forgotten about. It's a curious thing ... and seems to be the only time an original studio set was released with slightly different artwork on another label. Anyone know how or why this came about?

It might’ve been a foreign release. I’ve got a record of the self-title that does have the A&M logo, but the releasing company was Arola Eurodisc GMBH or something like that from West Germany.

But we know that in the UK “Ticket to Ride” was put out by MFP.

Staff member
Moderator
The Spectrum label was a division of Karussel, Ltd., a British concern that licensed various titles over the years for budget release and European distribution. For the "CARPENTERS" tan album, they had a simplified jacket with the picture that appeared inside on the US release, featiring on the cover. 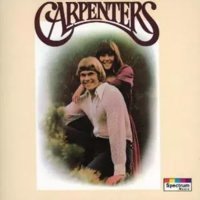 I remember seeing the LP version of this in various used records stores over the years. In the US, when A&M CDs of Carpenters material were being released, the CARPENTERS tan album had two of the hits in remixed form, "Rainy Days And Mondays" and "Superstar". On the occasion that I saw the Karussell/Spectrum CD, I bought it, just in case the original mixes were present. They weren't. The disc is a virtual clone of the first A&M release of the album. My copy was made in Germany.

Someday said:
Someone showed me yesterday a CD copy of the 'Carpenters' (Tan) album on the Spectrum label, which I used to have and forgotten about. It's a curious thing ... and seems to be the only time an original studio set was released with slightly different artwork on another label.
Click to expand...

Not the only time - Horizon has been released many times over under a different title, with the same tracks rearranged in a different order and different artwork. Some of these are bootlegs but some aren't and I've even seen them for sale on occasions in reputable record stores. When I checked the licensing arrangements on the CD sleeve on those I saw on sale, it would appear a similar "sub-licensing" arrangement happened as did with the Tan album above as Harry mentions, although I can't remember the label name for the life of me (it was over ten years ago). Here's one example (probably a bootleg):

Staff member
Moderator
Yeah, the HORIZON album fell into some kind of copyright hell in Europe, where many bootleg and even legitimate labels put out a bunch of knock-off releases. The all seemed to change the title, jumble the order of songs, and generally had muddy sound. Stick with the genuine HORIZON releases.
You must log in or register to reply here.
Share:
Facebook Twitter Pinterest Email Link
Top Bottom