Song4uman said:
Ok. Delivered.
I got BOTH the black AND white vinyl sent again.

Wow that was fast!!!
I hope mine doesn’t arrive wet

I know. I haven’t listened yet. Probably later tonight or tomorrow. I’ll report.
All I need in black album #1 to be good.

I have not received a re shipping notice yet and I noticed on UMe Carpenters Store that the white and black vinyl are both sold out.
Now I'm worried that I won't get a replacement for my white vinyl.

CD Japan is also sold out of the vinyl and Amazon is currently showing out of stock until Sept 10th.

Is it really sold out or have they got an influx of response of bad vinyl and they have cut orders? Well never know.

I'm waiting to hear reviews from those that got the black vinyl...I'm thinking of ordering it from Amazon but it's not even in stock.

Just cleaned the replacement vinyls using my Spin-Clean. Instead of the usual 3-4 spins each way...I did about 6-7 just to be sure they are really clean. Will give a listen later and report on the sound.

One of the white vinyls has about a 6 inch wide rough place on the side. Little rough bumps like when I was a kid and got a model car and had to separate the pieces.

I just checked my Amazon.ca order and it’s being shipped from Brownstone, Michigan to me here in Canada. It’s saying that it’s “ship and sold by Amazon.ca”, so it’s not an import order or listed as an import. But the current Amazon.ca listing is saying that if I ordered another one, it would take 1-3 months to ship.

Rick-An Ordinary Fool said:
I'm waiting to hear reviews from those that got the black vinyl...
Click to expand...

My black vinyl arrived yesterday. With a visual inspection it looks clean for the most part. There's a little scratch or something toward the end of "I Need To Be In Love". I haven't had time yet to play through it to see if it's audible.

Frankly, I kind-of don't really care. These were ordered a year ago almost and the excitement of a new release is long gone by. I haven't listened to the CD version in months, and I'll always default to listening to the originals, I suspect.

The white vinyl makes a nice collectible, I suppose. I'm not sure what I was thinking when I ordered the black. Oh well, another piece for the collection.

Harry you seem like you’ve lost your joy on this RPO release. Even with the bad luck I’ve had, I still want that warmth sound that vinyl provides so that I can rip it as my go to version. The bad luck I’ve had thus far won’t steal my joy from hearing Karen in a way I’ve never heard her before. Even though it’s been almost a yr...it’s still a release we never thought we’d see. What if this is the last release we will ever see from Richard?

If I can get a decent vinyl copy and rip this thing and remove any major pops and clicks it will sound better than the CD version in my opinion and better that it’s the final tweaked version. I have some vinyl that to me sounds so much better than any CD provides.

Thread Starter
Staff member
Moderator
My joys come and go. There will be a point sometime in the future where I'll be happy I have these vinyl versions - not that I'm unhappy now - it's just not quite as joyful a time as it would have been last year when this set was new.
W

The delay over here till mid September seems very puzzling what happened to vinyls coming out simultaneously or at least within a few days of one another Stateside and here in the UK?. Not that I’m excited anymore after reading the negative comments yet again about quality control!.

I'm really happy to report that I just got an email from Universal and my replacement white vinyl has been shipped and I should have delivery by this Friday.

Please Universal send me a good one this time.

2nd one arrived and upon inspection has the same right top ear creased. Oh well...will open it tonight. I'm expecting the worst but hoping for the best. I got another litho and they forgot to put the white plastic caps on each end. I'm not surprised. 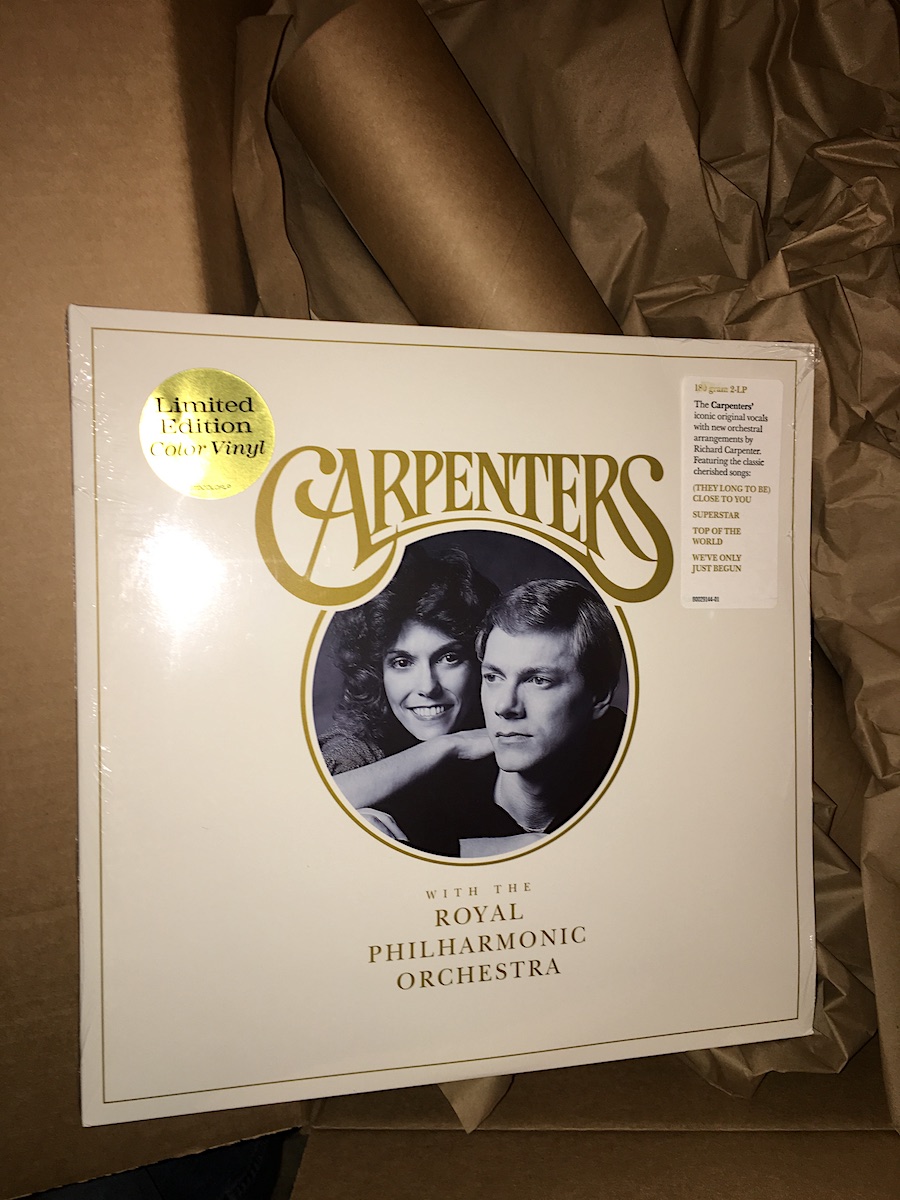 ^^Hoping your vinyl is in good shape, good luck!

I saw the vinyl on sale in a record store in London today -priced £30. No thanks, not even if all the reports had been that it was pristine quality.

So this will end my journey on this particular thread. I've given up on Universal they have serious issues with quality control. I opened my 2nd replacement white vinyl last night, cleaned them once on my record doctor machine with fluid. I'll give my review on the review thread later.

I'm keeping this 2nd set...not because it's superior to my 1st set but because I don't think it's going to get any better than this and I've lost hope that UMe can ship out good vinyl.

Here are some pics, the labels are still ripped but not quite as bad (meaning not on all sides), there is still plastic stuck but again not as bad and I was able to scrap some out and in the process I did tear some of the label near the whole. Oh well not my fault. LP 1 had a smaller cut on the outer rim, I was able to smooth it over some so it blended a little better, not nearly as bad as the 1st set gash on LP 2 that is not playable. The labels are also cut way off center, just looks bad.

As the pic shows both LP Jackets have major bends/creases on the top right corner. In this pic, the top is my 1st set, bottom is the 2nd set. It goes all the way from one side to the other so it looks terrible on a brand new LP just produced from UMe. How ironic that the 1st set crease is smaller than the 2nd set crease. Give it to Universal to send me 2 that are creased and bent (bad quality control) Whether they were put in the box this way or whether it occured during shipment, still not my fault yet I have the end result. Just for the record, terrible idea to send a poster tube with an LP in the same box with just newspaper in between. The LP should have been inside a separate cardboard box (hey UMe they do make cardboard boxes that fit just an LP to prevent damage)

These pics are not just to show the forum members my experience but hopefully that UMe will see the kind of product that they are putting their name on and what it looks like when it reaches it's customer base.
Last edited: Sep 7, 2019 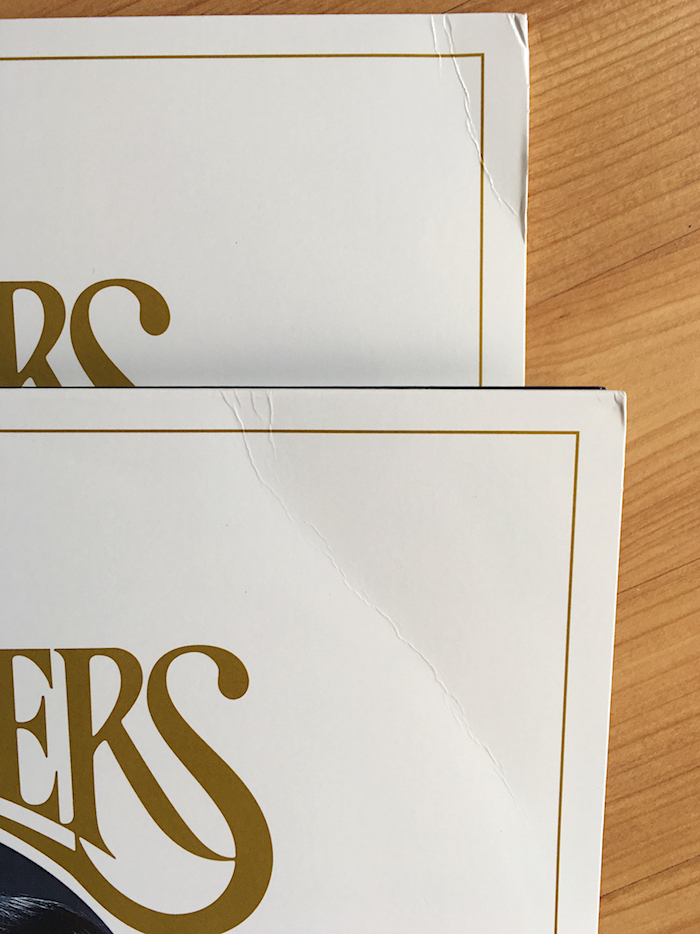 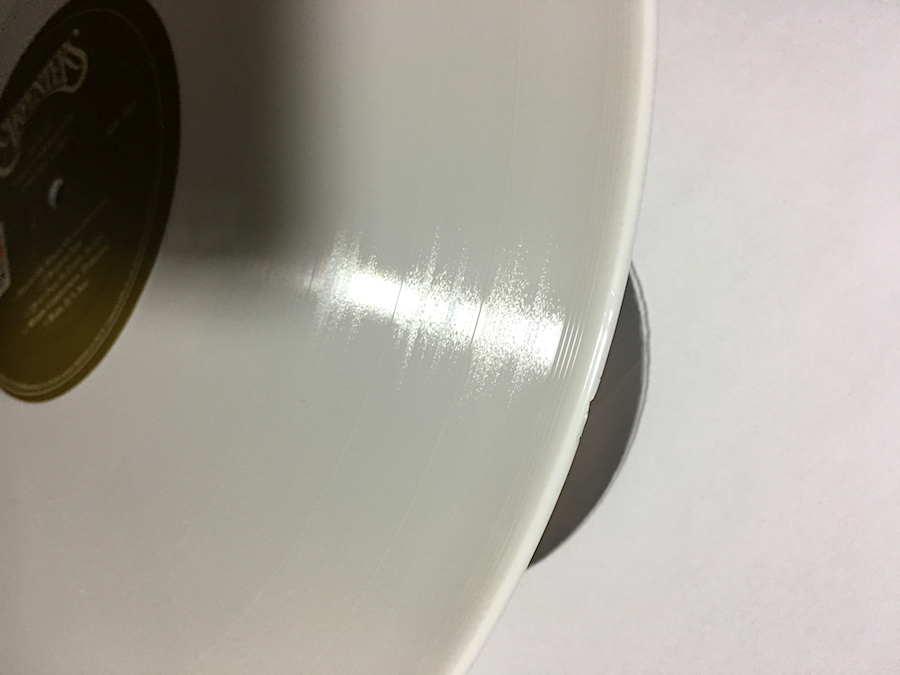 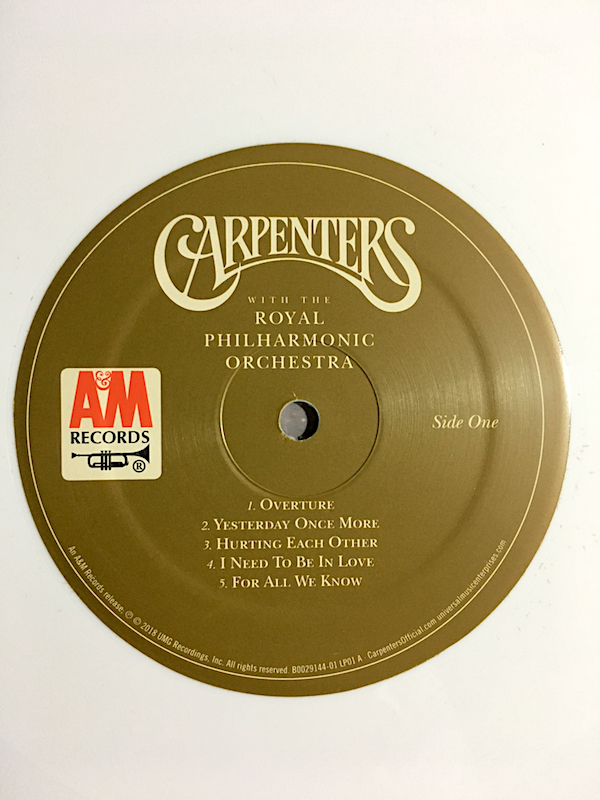 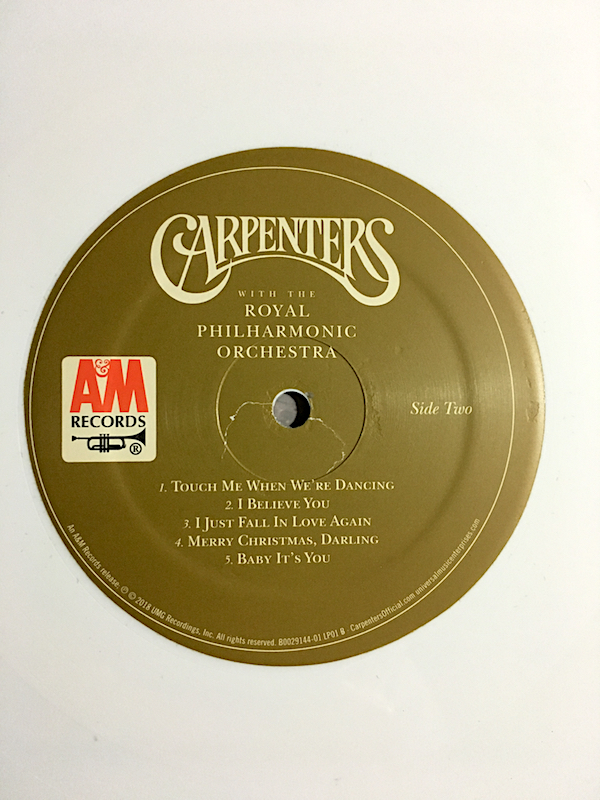 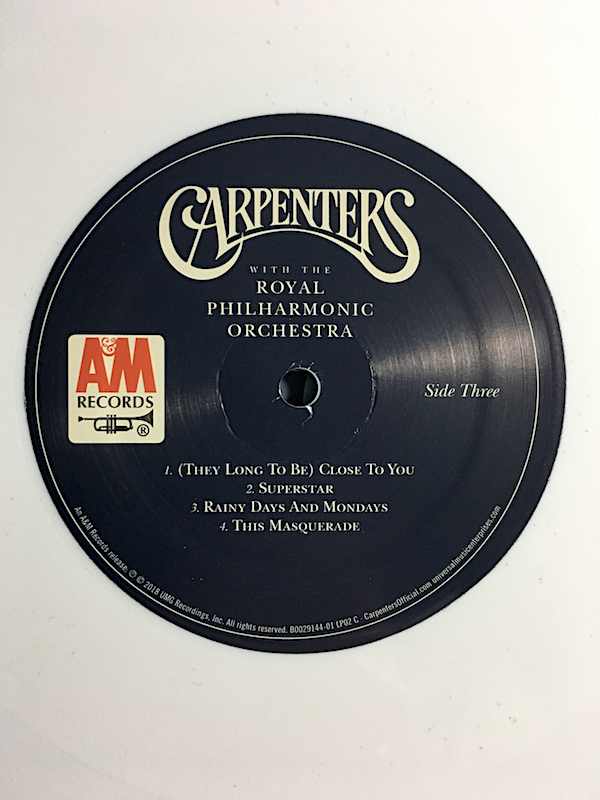 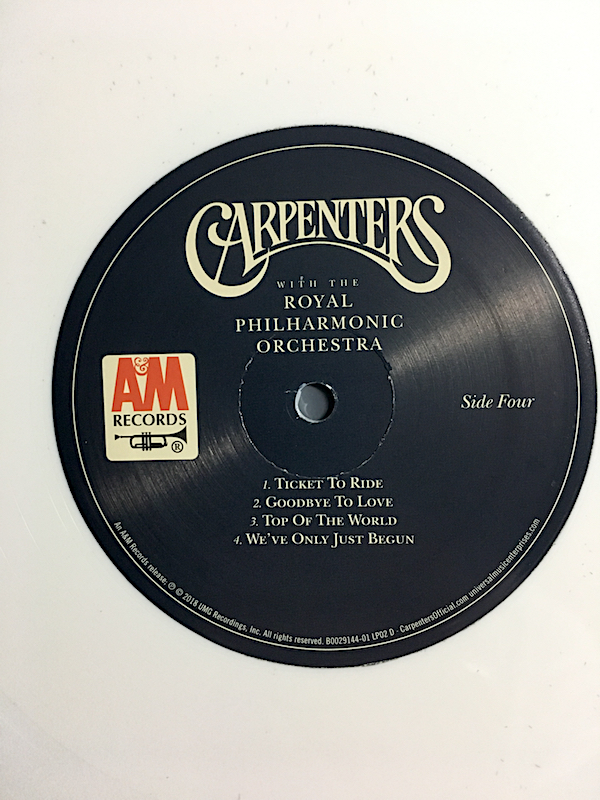 Reminds me of my CD of Interpretations that I got in 97 where the label was silk screened off Center so there is a silver crescent around it.

It’s just a shame Richard isn’t seeing all this because he’d be so annoyed. For what it’s worth, the LP set I saw in store looked immaculate. At least buying it from a record store would mean you could check the finish on the outer package before buying, even if you can’t see what’s inside.
T

newvillefan said:
It’s just a shame Richard isn’t seeing all this because he’d be so annoyed. For what it’s worth, the LP set I saw in store looked immaculate. At least buying it from a record store would mean you could check the finish on the outer package before buying, even if you can’t see what’s inside.
Click to expand...

I wonder if there would’ve been these many issues if the records were not pressed in 180g vinyl? Like if they went with 120 or 140? Could Universals machines be ill-equipped for the demands of 180? (Not to say anything of their workers?)

I was out shopping and stopped by Barnes and Noble. They had the new album and while it was the black vinyl it was in perfect condition on the outside, not a bend, crease, nick or mark, even the corners were perfect. I was so tempted to buy it but not for $35.00 and I already have one coming in the mail for $26.00.

Why not give Judy some love too!! 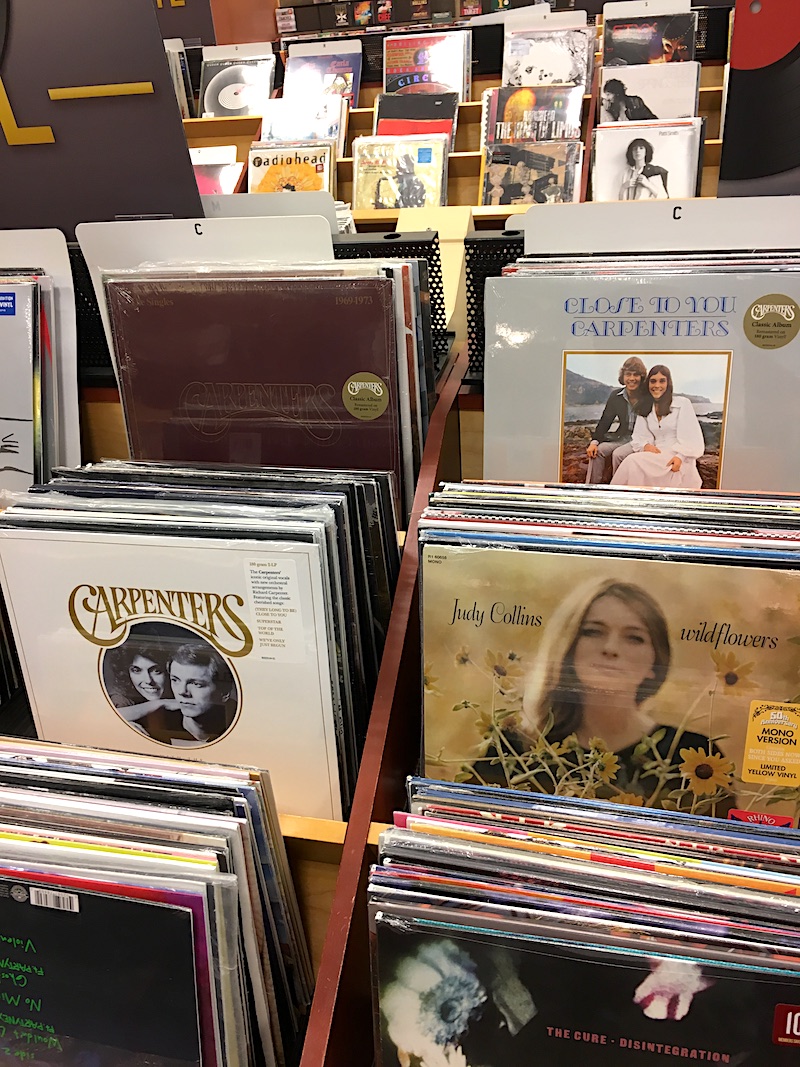 The two B&N's around me don't have it at all. There are a few within my relative vicinity that don't. Odd.

ThaFunkyFakeTation said:
The two B&N's around me don't have it at all. There are a few within my relative vicinity that don't. Odd.

Staff member
Moderator
I'm kinda surprised that Universal doesn't have somebody pulling out some "super closely checked" copies and keep them for the complainers, so they'd be sure to get a really pristine set the 2nd time out. Probably 85% of people won't complain about problems like the ones pictured.

Unless there aren't any perfect ones!

As for the bent corners, that's totally the fault of the way the items were packed, OR they got something piled on top of them in shipping. If a record is put into the same box with a differently-shaped item, the record jacket is pretty much guaranteed to get bent.

If just the corners are dented a little, that's shipping damage..... comes from shipping one album by itself. Once upon a time you could put an LP into a bigger box and the shipping would still cost about the same, but these days UPS rates are based on size, not just weight, so companies that don't have "special deals" with UPS are trying to shrink their packaging down as much as possible.