Staff member
Site Admin
Thread Starter
At first, there were new plans to hold Record Store Day in June, but now those plans have changed further, and the day will be spread across three Saturdays. Here's the official word (and as usual, I wish they'd quit using that stupid "drops" terminology for "releases"...).


Since 2008, Record Store Day has grown into the world’s largest single-day music event, shining a light on the culture of the indie record store across the globe. In 2020, that world is different, so Record Store Day will be too. RSD is now scheduled to be celebrated with special, properly distanced release dates on Saturdays in August, September and October.​
​
Record Store Day will look very different this year, but supporting indie record stores may be more important than ever. We don't know what sort of rules will be in place, or what sort of gatherings people will be in the mood for this year, so we're focusing on the music and getting the really great titles on the RSD Official List this year into the stores and into your hands, in the most financially and socially responsible way.​
​
The titles on the RSD 2020 Official List, launched on March 5th, will be released at participating record stores on one of these three RSD Drops: August 29th, September 26th, and October 24th. The new version of The List, with newly assigned RSD Drops dates will launch on June 1 so check back here for a look at when you'll be able to pick up the titles on your RSD 2020 wishlist at your local record store. ​
​ 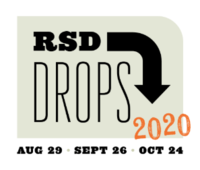 ​
​
Personally, I think they should have solved this by just releasing everything on the original RSD date and having stores offer shipping or curbside pickup. But it's not my decision, so...

And now this means there are three days that shoppers have to fight the crowds in the stores, not one. Thankfully there is only one title I'm after, and I'll mail order it.
You must log in or register to reply here.