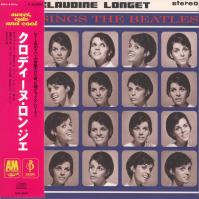 I think it's a little strange I have not seen or heard anything about this on A&M Corner.

Actually, I almost passed the Japanese CD release because of the title, which would normally be it's major marketing tool. "Claudine Longet Sings The Beatles" sounds like you average tribute album, but there is nothing average here.


When I first came across the reference to this release, it was described as "Claudine Longet Sings the Beatles CD MINI LP WITH OBI" a respected Beatles collector's site listed the album by listing three Beatles songs and then said "and 4 more.
So mini Lp and 7 songs made it sound like something a vintage Claudine Longet fan like myself would not need.

I started out as a DJ in the late 60s so I played her songs (including the occasional album track, on the radio and I had been buying her albums on A&M since the first one. As life turned digital I have purchased all the quality reissues including all the original albums, so why would I need a mini album of seven songs I already had?
A further digging and I found out it was not a "mini LP" with seven songs, but rather a collector's dream come true, with 16 hard to find, and some probably previously unissued on digital before.

For example tracks 11 (Nothing To Lose) and 12 (White Horses). Claudine starred in the Peter Sellers/Blake Edwards comedy "the Party" and sang Nothing To Lose on screen in the film. The RCA "soundtrack" album had Henry Mancini's Chorus. The song was issued in an A&M recorded version as the B side to White Horses which reached number 30 on the Easy Listening chart, but neither song appeared on her A&M albums, hence they only exist on mono masters. The soundtrack version of Nothing To Lose from the film is included here as track 22..which as I said was not on the original RCA vinyl soundtrack.

Same basic thing applies to "A Flea In Her Ear" Claudine's title theme song used in a Rex Harrison comedy. The soundtrack album, featured the song as a sound-a-like with a studio singer trying (unsuccessfully) to sound like Claudine Longet.

Dark Shadows fans..listen up! Likewise her excellent recording of Shadows in The Night, is the original mono single master being her vocal version of the Quentin's Theme made popular instrumentally by the Charles Randolph Grean Sounde in 1969 from the Dan Curtis daytime television soap opera.

The cover is a cute homage to the Beatles "Hard Days Night" UK cover, making it a great addition to any Beatles collection.. and that is probably intended market.

But if you are a Claudine Longet fan, and only have one CD by her..or every one of them...you need this one. It completes any collection no matter how extensive.

I have had all this material on vinyl for years (except the four foreign language songs, in Japanese and Spanish) but it's great to have them in superb sound on a comp manufactured by the same company (King in Japan) which originally issued the material in the 60s.

So for me, personally, this is the best (and most amazing) comp I've purchased this year. A real fan put this one together.
Don't miss this one...

I've seen this comp floating around the Internet for a number of years, but have always shied away from it as it appears to be an unauthorized release. Discogs lists it as such and doesn't permit its sale in its marketplace.

One clue is the label logos of both A&M and Barnaby Records. IINM, those two are not under the same ownership - or weren't for a long time. I know that when some fans tried to get together for a comp with both Barnaby and A&M track, they ran into some road blocks and had to limit the A&M tracks. Might have been "CUDDLE UP WITH CLAUDINE" or something like that.

Also, IINM, Pony Canyon and King Records are two different entities, both of whom had distribution rights from A&M at one time or another.

However, I've also recently been enthralled with what looks like a Japanese bootleg of Herb Alpert & The Tijuana Brass - BEST SELECTION. It's either gray area or bootleg, but the sound is superb. So perhaps this is another example of some fine work - if unauthorized - over there in Japan.

Staff member
Site Admin
I wonder if it is one of those "grey area" releases that are only legal in certain countries due to copyright laws.

Thread Starter
It does not appear to be a "grey area" issue most everything is off master tapes (at least the A&M stuff) and it is manufactured by King Records in Japan and they were the original distributor of A&M back in the 60s. They probably maintained their tape library.

Staff member
Site Admin
Hey, if these releases make you happy, then that's what they were designed for. You've apparently got them, so whether or not they are official doesn't really matter - unless you care about the real rights-holders getting their fair share. And we don't know whether or not they do or don't.

Staff member
Site Admin
King Records may still have some sort of deal with Universal--there is no way of knowing, thanks to all the different labels that have changed hands over the past few decades.
You must log in or register to reply here.