Close To You Promo Single

Staff member
Site Admin
Could this have been a test pressing?
A

Thread Starter
I think the cover of "Lost Treasures" says it with the phrase: "Rare and Unreleased".

Staff member
Moderator
I may be wrong, but I think that this is a FAKE.

Staff member
Site Admin
It sounds like a really beat-up styrene 45, with the pops and distortion in the louder passages, but you're right that test pressings were usually standard boiler-plate labels with lines for handwriting the titles. I've found no other reference to this in any of the databases I have access to.

It would make sense that the catalog would be before "To Wait For Love", as this was supposed to be a follow-up of "This Guy's..." and after it was nixed, "To Wait For Love" was the next one out of Burt Bacharach's drawer.

Steve Sidoruk said:
I may be wrong, but I think that this is a FAKE.
Click to expand...

My vote is for "fake" also. Before even seeing the thread, one glance that label made me think of it being a fake. Given all the single variations out there, consider how the label could be a copy/paste job. One could easily create weathered text in Photoshop, but the pressing plants used certain fonts that are not exactly available today. (There are some modern day fonts that are very close, but A&M singles we've seen through the decades rotated through a regular set of fonts.)

How could you do this via copy and paste?

The A&M logo and associated text could be from any random A&M single.
The song title could be copied from any Carpenteers single. (Desaturating and changing levels in Photoshop can easily turn a tan background to white.)
The artist name and credits below could be copied from a "This Guy" single.
That "1950" does look out of place and too clean.
Discogs has dozens of A&M singles that could have been used as the source.

In addition, the sound is easily manipulated in Adobe Audition or Sound Forge. The song was unreleased until Lost Treasures--specifically, and if I remember correctly, the notes mention Herb tried the tune and shelved it, as engineer Larry Levine mentioned it was not a good fit for Herb. Not only that, the recording was probably not completed. In fact, if there is a brief trumpet solo (I haven't listened to it in years), we could tell by his playing style whether it was recorded in the 60s or the mid 2000s. In other words, it's not something he would have approved for release.

Staff member
Site Admin
OH! This just occurred to me. When Carpenters recorded it, that was when the title was changed from "They Long To Be Close To You" to "(They Long To Be) Close To You," as the parenthetical version was suggested to make the song easier for radio and buyers to remember (hence the deemphasized parenthetical part of the title--buyers could simply as for "Close To You"). All earlier versions had the long, non-parenthetical title. 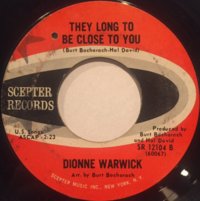 Staff member
Site Admin
Reminds me of those fake Karen Carpenters albums on "Magic Lamp" that are out there on Discogs but don't exist. Some people have too much time on their hands.

Staff member
Site Admin
If this ends up on Discogs, we'll need to report it somehow. I hope those Magic Lamp singles are being reported as well. Fake releases do nothing but undermine the integrity of everything else posted on Discogs. 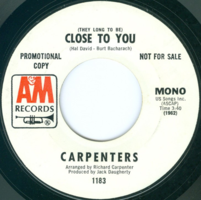 And here's your artist: 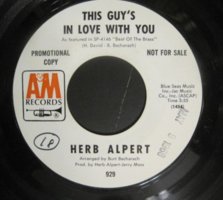 And the final nail in the coffin... 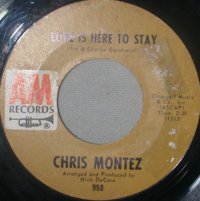 Staff member
Site Admin
BTW, thanks to @abstract_fan for bringing this to our attention--if this thread helps others from being misled, we've done our good deed for the Internet today.

Staff member
Site Admin
The charade did not last long.

I'll admit it's fun to play "what if" and mock up some of these in Photoshop, but I would not misrepresent them as being real, official, etc. And I couldn't be bothered to do the audio editing.

It’s probably the same two guys doing the fake Karen Carpenter CDs and vinyl, and Carpenters Navy Presents pressings a couple of months ago. He said he sold out on Record Store Day. Haven’t seen it listed since then. It was reported to EBay and Discogs.

Staff member
Site Admin
Luckily this thing wasn't listed for sale anywhere...
You must log in or register to reply here.

R
The "Close To You" Music Videos - Why Two?

The poster included in THE VERY BEST OF HERB ALPERT