Thread Starter
Of all of the compilations that you own, what are your thoughts on the covers? What are your top three? Which one is you least favorite?

3). Collected- I think I like it because the photo was new to me.

Staff member
Moderator
I tend to favor the ones without pictures, so I'd probably choose between the two SINGLES albums (1969-1973, and 1974-1978), or things like LOVE SONGS, GOLD (the original black and gold). I guess I'm a sucker for shiny packages...

Least favorite has to be INTERPRETATIONS. The two of them are looking off in different directions, and Karen's got this dumb-looking fur collared thing on. Awful.

Least favorite:
Singles 1969-1981---I may be in the minority here, but I don't care for this photo. Although I get the intended sentiment (Karen is a fun person), I think the goofiness is misplaced in an album cover. If Karen and Richard had made a comedy album, this photo would be ideal.

Jamesj75 said:
Least favorite:
Singles 1969-1981---I may in the minority here, but I don't care for this photo. Although I get the intended sentiment (Karen is a fun person), I think the goofiness is misplaced in an album cover. If Karen and Richard had made a comedy album, this photo would be ideal. For those who may not have seen the Carpenters Perform Carpenter cover, here it is: 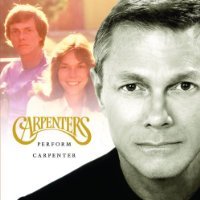 My favourite is The singles 1969-73. It's not very often you see a brown album cover and it was just so classy and distinctive. Tells you in that wonderful ident, who it is and what it is!!
Second is the UK yesterday once more (1984) double album cover. It's got a really classy silver edged image of K and R, similar to the 1985 version blue cover, but i think, a bit more impressive.
Third is Singles 74-78.
I agree with Harry, apart from Horizon, i much prefer non imaged album covers. Passage is my fave cover of studio albums.

Jamesj75 said:
Honorable mention: Carpenters Perform Carpenter (2003)---This cover (1) includes in the background a great picture of Karen and Richard (same as used in Gold) and (2) includes in the foreground probably the best picture of Richard ever taken (in my humble opinion).
Click to expand...

I always thought this a fairly bombastic release and unless you were a diehard fan and knew Richard wrote some of their material, the compilation title seems really odd. If you didn't really read it properly it almost reads "Carpenters Perform Carpenters", which just sounds nonsensical.

That whole album (Carpenters perform Carpenter), hmmm. Mixed feelings on the whole album. Of course I love the songs, all written by Richard, but doesn't it appear a tad egotistical?
A

Yeah, great collection of songs, but that compilation was definitely pushing the envelope.

Industry Member
But remember, except for diehard fans and trivia nerds (hello!), many people would not know which songs Richard wrote or even that he wrote at all...it would have been cool to do that Carpenters cover album as well as Bacharach, Paul Williams, standards, etc.