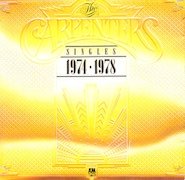 A great album Just wished it had been released in the US and promoted by A&M!

Gives you whatever worthy tracks that missed-out on the FIRST Singles Collection, ...1969-1973... I sure wish the 5th Dimension could've put out a larger Greatest Hits on Earth-set, as it was released "prematurely", but their run on their Record Label, Bell, kind of ended unexpectedly...

Favorite tracks here: "Solitaire", "I Need To Be In Love", "Sweet, Sweet Smile" and "Only Yesterday"--and the still-OVERPLAYED "...Interplanetary Craft"!

"Jambalaya" is pretty unusual to have here, as is "Happy" and I never thought "There's A Kind Of Hush" could go beyond recognition of it being a song by Herman's Hermits!

Staff member
Site Admin
I remember being up in Canada for the first time way back in 1978. We'd driven up to Montreal and Quebec City for a few days and even timed it to a late-season Phillies game to be played up at Stade Olympique against the Montrael Expos. It was the third year in a row that the Phillies were to win the NL East division, only to be crushed by (usually) the Cincinnati Reds in the playoffs.

Somewhere in our travels, we went into a record store, and it was there that I first saw and became aware of the SINGLES 1974-1978 album. Naturally I grabbed it with its attractive foil color and brought it home. I remember being thrilled with the different (single) version of "Can't Smile Without You" that appeared on this disc.

Back in the early CD-era, this was an early find - and still an import from Canada.

A solid compilation but just not as compelling as the first hits set.
Reveals the chart decline of our wonderful duo.
But still a fun listen!

Staff member
Moderator
I'm just curious, in the song listings the writer for Calling Occupants is listed as "Klatuu." I'm fairly sure it's supposed to "Klaatu." Is it just spelled wrong on this list or is it that way on the actual release?

This is a nice collection. Too bad it wasn't released here.

I remember I had to go all the way to Quebec City and find this treasure at an Archambault store (along with several Celine Dion goodies).

As I recall, the CASSETTE version of this album includes the RADIO EDIT of "Calling Occupants of Interplanetary Craft," which is unavailable anywhere else besides the 45.

This LP I stumbled across at a used record store in oh say 79ish. I was shocked and replete with joy as I had no idea that this album existed. Simply because of the fact that it had a stunning golden cover was enough for me to know I'd struck "gold" once again. This LP w/o question should've had a US release. This would've been timely for CarpenterS.

A good album overall, but it does not compare to the first Singles collection. A few of my favorite Carpenters tracks are on here - All You Get From Love Is A Love Song being one of them, and of course I was glad to hear the alternate version of Can't Smile Without You.

A tidbit less essential than the first volume, but a most pleasant listen I just find it rather surprising an America version wasn't issued having the European cd.

...although Richard was "under the weather" at this stage, Karen was in England promoting both this album and 'Christmas Portrait'. Both albums were selling extremely well. If we had been able to clone Karen, she could have also promoted in the US. Release the album here, (I am in the US) and do us fans a favor. Hindsight is 40/40.

This collection would have been a great opportunity to add two new previously unreleased songs on the album, using them as singles for promoting it.
A

I remember seeing this album at Peaches Records and Tapes when it was just released in the imports section of the store. The gold embossed cover really jumped out at you, and I was very surprised and happy to see it. It's a great collection save for 'Jambalaya', though even that tune got to #12 in the U.K. during their 1974 tour. So, it makes sense they included it.

The odd part is 'I Believe You' COULD have been included on this album as a new track to entice buyers, but I'm sure they felt it would be better utilized on a forthcoming new album.

Interestingly, "I Believe You" was included in the "Asian Incarnation" of this release (known as Carpenters Classics) released in 1979 in Singapore, Malaysia and Hong Kong. That album also had the single edit of "Occupants".

I LOVE this album........... It was the first ever cd i bought, in fact i bought it before i even had a cd player!!!
A family friend also had the original vinyl cover which actually did have the shiny foil cover, rather than later pressings which just had a picture of it........ I didn't see the album when it came out originally, so I was astounded to see this original cover, she very kindly let me swap the covers over!
I really like the track listings, i was listening to it in my car last night funnily enough. Sweet sweet smile is a great track to open the album. It's also wonderful to have 'happy' on a compilation. It has a nice mastering too, it's slightly brighter than original releases, so it has a bit more 'ooomph' to the tracks.
The one track I'm not hugely pleased with being on there is Jambalaya, I always feel this should be pre '74 Carpenters and doesn't quite fit in with this collection, but that's just my feelings.
Hi Calvin! Does the single edit of 'Occupants' NOT include the DJ prelude? I'd love a version of that song without all that talking at the beginning!
I actually do like it as much as singles '69-73, although the hits weren't AS big ( postman of course number 1 in US ), it clearly shows how K&R progressed with their musical style as the years went on....... All you get..... is one of my fave tracks for example.
It also rarely describes the group as 'THE' Carpenters on the cover, rather than just 'Carpenters', perhaps because it wasn't released by A&M in US.
The track listing works really well too.......
What a shame things turned out the way they did and there wasn't enough for a third volume of singles from '78 - '82........

Staff member
Site Admin
OK gang - particularly those of you across the pond - it just hit me that on SINGLES 1974-1978, the final track has a subtitle, with a word spelled "Recognised". Now, that's the way the UK (and Canada) properly spell the word. Here in the US it's spelled "Recognized".

Are there any other Carpenters albums/CDs/tapes with any altered UK spellings of words?

LondonRobert said:
Hi Calvin! Does the single edit of 'Occupants' NOT include the DJ prelude?
Click to expand...

Does anybody have the single version of 'Occupants' on CD? Did 'Carpenters Classics' ever come out on CD? I know the single version was on the Japanese Singles Box, but I can't drop that kind of change for one or two things I'm missing. Wish I could.

I was thinking the same thing myself...... pity there isn't a more readily available version on CD. I notice however, its 3mins 59sec and standard version is 7 mins 6 secs.. The dj part cant be 3 mins long, so there must be some other parts of the track cut out??

Of course... all the first chorus to when Karen sings "you've been observing our Earth" was edited out and it moves right to the second one with Richard singing the similar line and then after Tony's solo the song goes to the last chrous Karen sings before the ending, fading early.

I am also a huge fan of this particular compilation! I happened to come across it (labeled an import) in a record store in the United States sometime in 1979. As is the habit of many of us at this website (and, for me in particular, a habit of a few decades), every time I visit a record store, I must check out what, if any, CDs (formerly albums) are available by the Carpenters. And, also a habit of mine---maybe others?---if the Carpenters' CDs are behind another artist, I move them so that they are better prominently displayed, even moving other CDs to keep the alphabetical listing undeterred. But I digress...

This CD has many pluses going for it:
So, as others have stated, in total, the songs were not as hugely successful as in Singles 1969-1973, they still shine brightly---and sweetly...
A

Walter Kennedy said:
Of course... all the first chorus to when Karen sings "you've been observing our Earth" was edited out and it moves right to the second one with Richard singing the similar line and then after Tony's solo the song goes to the last chrous Karen sings before the ending, fading early.
Click to expand...

I also love the part where they sing the 'Ahhhhs' at the end of 'Occupants'. Wish that had been part of the single mix, but it would have been too long, I suppose.

LondonRobert said:
I notice however, its 3mins 59sec and standard version is 7 mins 6 secs.. The dj part cant be 3 mins long, so there must be some other parts of the track cut out??
Click to expand...

The single version is around 4m40s, not sure which one you have? Klaatu's is 3m57s.

The edit omits the DJ intro and one of the robotic "we've been observing your Earth" and cuts straight to Karen's "calling occupants" line that leads into the piano interlude and the "please come in peace we beseech you" line.