A&M Retro said:
Does anybody have the single version of 'Occupants' on CD? Did 'Carpenters Classics' ever come out on CD? I know the single version was on the Japanese Singles Box, but I can't drop that kind of change for one or two things I'm missing. Wish I could.

Walter Kennedy said:
No, it does not.
Click to expand...

Hi Robert, as mentioned by Walter here, the single version appearing on "Carpenters Classics" does not have the DJ part.

^^^ Calvin, nice to see you around again!

Question for Walter and Calvin, or anyone... Which Carpenters Classics album is this (Calling Occupants edit) on? The only Classics album I know of is the A&M 25th anniversary. I must have missed out on this one!

Thanks Calvin et all for all the info............
I can't find any record of the 'Carpenters Classics' release, seems like it was quite rare and prob long deleted now.......

mstaft said:
^^^ Calvin, nice to see you around again!
Click to expand...

aaflyer98 said:
Question for Walter and Calvin, or anyone... Which Carpenters Classics album is this (Calling Occupants edit) on? The only Classics album I know of is the A&M 25th anniversary. I must have missed out on this one!
Click to expand...

It was a release (LP and cassette only) in 1979 only for the Asian market (Singapore, Malaysia, Hong Kong). I would post the covers but I am still not sure how to upload photos here LOL!
Last edited: Aug 15, 2013

newvillefan said:
The single version is around 4m40s, not sure which one you have? Klaatu's is 3m57s.
Click to expand...

I can't say about other markets - I only have a bunch of US singles, both stock and promo. All "report" 3:59, but that's a tactic record companies used to fool radio stations into thinking songs were shorter than they really were. I've just timed both a promo short single and a stock short single and both actually time out to around 4:04 or 4:05. And the final fade is very rushed.

Now this is apparently identical to what's on the Japanese Single Box. Windows Media Player is reporting that one as 4:12, but if you play it, it fades in the same spot as the US single, right around 4:04-4:05.

Radio stations were only sometimes fooled by the tactics of record companies reporting songs shorter than they were, but I guess enough were to warrant that the practice continued for a lot of years.

My suspicions as to why "Calling Occupants Of Interplanetary Craft" is only ever issued in its full version, is because that's what Richard feels is the correct version. The shortened single was probably done under duress and he still has a bad taste in his mouth from it. The short version only served to attempt to get the song played on radio - and now that that's no longer a goal, Richard must feel, what's the point in issuing the chopped up version? But naturally, we completists want it all, and thankfully the Japanese have provided what we wanted, even if only in an expensive set.

The CARPENTERS CLASSICS album from Hong Kong reports the 3:59 timing.

I got mine from Canada when it was released, strange that it does not say anywhere on the disc where it was made but the back of my jewel case says Canada. The catalog is VPCD 19748, the inner run is stamped Mfg by Cinram (which appears to be a huge manufacture of optical discs in Canada)

I was always let down on the packaging for this, mine only came with a 1 page open booklet with really nothing but the track listings printed again on the right and compact disc info on the left, really sparce, not a picture to be seen. I agree that a U.S. release would have helped along with a bonus track to entice more buying.

If someone has the UK CD version can you explain what consists of the 6 page booklet inside?
Last edited: Aug 15, 2013

Staff member
Site Admin
My SINGLES 1974-1978 CD is exactly as Chris describes. My LP seems a bit of a hybrid: Its got the gold-foil cover - both sides. On the rear, the fine print says: "Sleeve Printed and made i n England by Rondor, Ltd. © 1978 A&M Records Limited. All rights reserved. Country of manufacture of record as stated on the record label."

So I've got the gold embossed cover with the Canadian disc. The inner sleeve has poly lining and a big A&M Records logo and the address on Ontario. There's a brag line about " PROTECT YOUR RECORD COLLECTION. We're making this A&M Protective Sleeve available...To order write to..."

I clearly recall buying it in a record store in Quebec on an early trip up there in the late '70s/early '80s. I've always loved the gold packaging- very classy looking.

Harry said:
My SINGLES 1974-1978 CD is exactly as Chris describes. My LP seems a bit of a hybrid: Its got the gold-foil cover - both sides. On the rear, the fine print says: "Sleeve Printed and made i n England by Rondor, Ltd. © 1978 A&M Records Limited. All rights reserved. Country of manufacture of record as stated on the record label."

So I've got the gold embossed cover with the Canadian disc. The inner sleeve has poly lining and a big A&M Records logo and the address on Ontario. There's a brag line about " PROTECT YOUR RECORD COLLECTION. We're making this A&M Protective Sleeve available...To order write to..."

I clearly recall buying it in a record store in Quebec on an early trip up there in the late '70s/early '80s. I've always loved the gold packaging- very classy looking.


Did yours have this small, transparent sticker with the Carpenters logo in black stuck to the front of the LP? Mine did...I guess they did that because the gold cover was kinda shiny and hence the title/artist etc might have been hard to decipher at certain angles

Staff member
Site Admin
I don't recall a sticker. It's possible there was one on the outside of the shrink wrap. Usually I save those if possible.

Still interested in this info if anyone has it:

^If someone has the UK CD version can you explain what consists of the 6 page booklet inside?

Hi Chris,
It's not really a 6 page booklet, it is a single page insert that folds out into 3 pages, so i suppose there are 6 pages if you count both sides.
The front page , when looking at the cd is a replica of the front cover, but the GOLD cover rather than on the cassette ( which i have ) which has a copy of the FOIL original pressings cover.
the next 'page' has a list of the tracks, each one with the time next to each track.
next page has album covers and catalogue numbers, they are now and then, horizon, passage, close to you, carpenters. They show album and cassette numbers but now and then and close to you have compact disc numbers too.
Turning the 'booklet' over , on page one is the same track listings as on other side - this is the side you would see as you open the cd and look inside - it also includes details of who produced each track and produced dates.
Next page has more album pics and catalogue numbers , they are, Christmas portrait, Old Fashioned Christmas, Singles 69-73, Made in America and Voice of the Heart. Just Singles 69-73 has a compact disc number included.
The final page is the standard page of the time re details of ' The Compact Disc Audio System' in four languages.
Obviously, it includes later album details as the cd was produced long after '78.
The back cover of the cd is the track listing again, with a barcode in bottom right hand corner.
I also have the LP so can dig it out if you would like details of whats inside that.......The cover is fab on the early LP pressings, as you earlier said, it is embossed and it is shiny silvery/gold foil sort of material, it's FAB!
I can send you some pics if you like? Not sure how to post on here........

P.S Chris, i just found a link with amazon in uk for the original LP ;

It shows the original LP cover. If the link doesnt work then go to www.amazon.co.uk and do a search for ' the carpenters singles 1974 - 1978 ' and the different versions should come up. 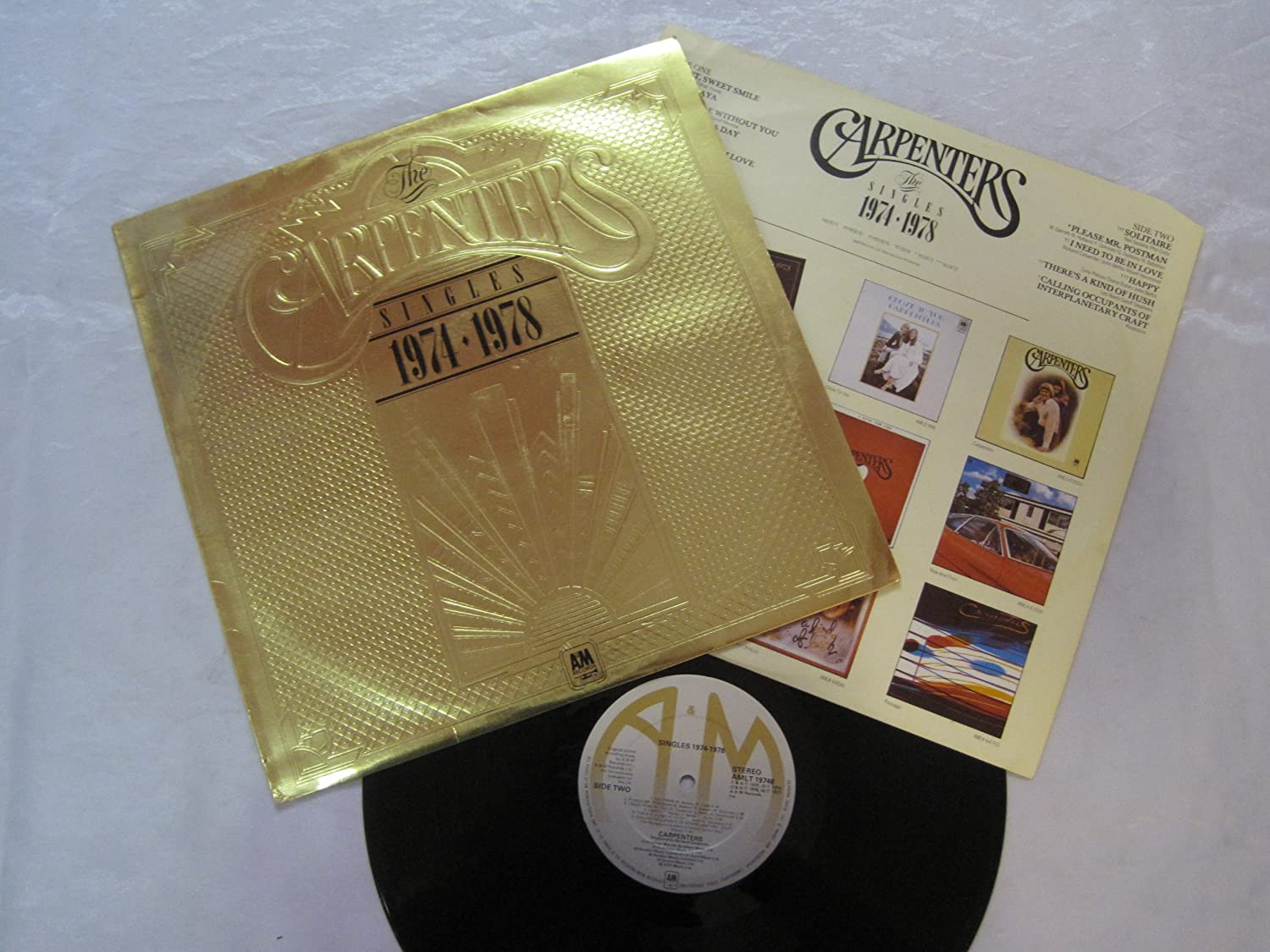 Aha! Look at that innersleeve. It reveals that many of us have been mistaken all along about the "The". It doesn't go with "CARPENTERS" - it goes with "SINGLES"! It's just that the cover has the "The" above the CARPENTERS logo, but because it's black, it should be understood to go with SINGLES - at least that was likely the original intent.

My innersleeve is just plain with the poly liner and A&M logo.

Hey Harry!!
You are right! The 'THE' is written in black so it really does look as if it's meant to refer to 'THE singles', but as you say, they put it above 'Carpenters', it is a bit misleading!
R

Thanks Bob for those details!!

I noticed the "The" on my CD cover as well however on the CD itself they appropriately placed the" The" below Carpenters name so it goes with The Singles. They should have done that on the cover.

Wow, I didn't realize how sharp looking the LP cover looks...one question...the foil bumps on the left and right side are those raised up a bit or are they flat? When you run your hand across the cover can you feel all the details?
I may have to seek out this LP just for the cover alone.

Yes, as Harry says, they are raised.
It's a beautiful cover, i didn't 'get into' Carpenters until the early 80's and by that time the original pressings of the cover had been replaced by a copy, which is what is used for the cd. As I said previously, a family friend actually had this original cover and kindly let me swap it for the later version........ In those days there was no internet etc, so I had no way of knowing there was a different version out there, I wasn't hunting around used record shops either at this time, so just didn't see it. I can still remember how excited i was when i saw this original cover, a little bit like when I saw the original LP lyrics insert for now and then, with the classic car pictures on them. I cant believe this was over 30 years ago........ I feel so old!!! hehe

After reading this thread, I just listened to this again album again (vinyl) after many years. Had completely forgotten about the alternative vocal and arrangement on Can't Smile Without You. Does anyone know how this came about? Was it re-recorded for the singles album and why? ...

Staff member
Site Admin
I'm not 100% sure, but I believe it was redone to spruce up the song a bit as the b-side to "Calling Occupants...". I guess the theory might have been that if "Occupants" was too far of a stretch for radio, then the b-side could become the a-side. That was the first place I heard "Can't Smile Without You" in its single mix.

Listening to my vinyl tonight. I haven't played this album much, so it is pretty pristine. Purchased at a record store in Kansas in August 1983. Gold foil embossed. AMLT19748.

Wow. There are no pops and cracks. Clean as a cd.
You must log in or register to reply here.