This was a good compilation back in it's day,but I can't figure why anyone would want to own this now.With so many definitive,career-spanning compilations available,"Singles 1974-1978" is really a dated period piece.

Even sales of "Singles 1969-1973" dropped dramatically after "Yesterday Once More" was issued in 1985.There's no need to own either of those 70's compilations.And frankly,I'm not crazy about the title "The Singles"-it reinforces the misguided label of Karen as "the 70's pop singer".
A

The new version of 'Can't Smile Without You' was done AFTER Barry Manilow made it a smash hit, so I can't imagine them using it as a back-up for 'Occupants', but who knows? I just remember being shocked that it was so different....and better....than the version released on 'A Kind Of Hush'. I do remember seeing the '1977 A&M Records' on that side of the 45 label as I bought the 45, and wondering why it didn't say '1976', and thinking that was odd. So that means it was recorded in 1977. This would be a great question for Richard.

Some reasons for maybe for wanting to buy it - is that it doesn't include remixes, no tons of reverb on the vocals and 80's sounding artificial drum pads.
It includes 'happy' which is interesting, as that track rarely appears on a compilation.
It forms a great companion set with 'singles 69-73' and ends their Golden period, IMHO. I can do without want you back in my life again on other comps.
I quite like the title 'singles'. Richard apparently didn't like 'greatest hits'. It sounds more exclusive maybe and professional! Classy!!

I actually listen to this album and 69-73, much more than i do any other, although I am listening more to the new 'Carpenters Collected', ( all original mixes), since it was released.

Harry said:
I don't recall a sticker. It's possible there was one on the outside of the shrink wrap. Usually I save those if possible.

Will share a pic of the cover with the sticker once I figure out how to do that here (I do think it was on the shrink wrap which I saved and stuck onto the cover proper).

was Happy a single anywhere?

Staff member
Site Admin
It was the b-side to "Only Yesterday".

Staff member
Site Admin
Calvin has sent some pictures of the Asian CARPENTERS CLASSICS album that was released on LP. Here are his pictures of the front and rear covers: 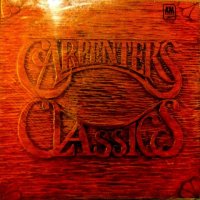 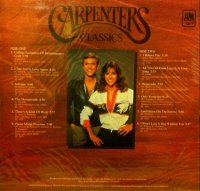 I guess I should try to dig it up. I need the single mix of 'Occupants' on something besides 45RPM.

I remember getting this in late 1983 or early 84 (and the story behind how I got it is a little intresting, but I'll save it for another post) and it came with a small poster inside of the picture on the back. A nice surpirse.

Cool! Had never seen this one before!

Staff member
Site Admin
I located a semi-reasonable copy of CARPENTERS CLASSICS and it arrived today from Asia. I'm less than thrilled with it - the record itself is pretty beat up. "Calling Occupants" actually has a skip or two in it. And even without all the snaps, crackles, and pops, underneath it all is a not-so-great pressing to begin with. The sound is kind-of thin and splashy.

But it's all OK - I just wanted it because I'd never heard of it before and because it had that single version of "Calling Occupants" on it. At least the cover is in great shape.

Thanks Calvin for bringing the album to our attention. It's always fun to have new (old) discoveries!

Hi
I wonder why this Album never included goofus or i believe you.Ok i know these songs were not relesed as singles in the UK but neither were cant smile without you and happy and they are on this album.Also i think this album should have been relesed in USA at the same time as christmas portrait.

I,m not sure goofus or i believe you were released as singles in Uk. Cant smile and happy were b sides to singles though, so a slight reason why included!!
M

"I Believe You" wasn't included in "Singles 74-78" because it was intended to be the first single for the planned 1979 album-which never materialized.It was scheduled for a Spring 1979 release.

"I Believe You" eventually surfaced on "Made In America",and several tracks from that lost 1979 album were included on the posthumous albums.There were approximately twenty tracks recorded for the 1979 album.

Mr. J, did you list those 20'ish track titles somewhere before?? I cannot seem to locate it.
PS...I like the songs but not the order. It doesn't flow to me

mr J. said:
"I Believe You" wasn't included in "Singles 74-78" because it was intended to be the first single for the planned 1979 album-which never materialized.It was scheduled for a Spring 1979 release.

"I Believe You" eventually surfaced on "Made In America",and several tracks from that lost 1979 album were included on the posthumous albums.There were approximately twenty tracks recorded for the 1979 album.
Click to expand...

Actually, I Believe You did not first appear only on the 1979 Asia Only Release of Carpenters Classics. I recall seeing in a local magazine an A&M compilation album before the release of Carpenters Classics, which featured various artists - it had a white background and pictures of the artists superimposed on it, and there was one of the Carpenters with the titles of two songs, I Believe You and Calling Occupants. It was pretty rare in Singapore and so I could not get hold of a copy...I recall being very disturbed and excited about this "new song" (IBY) and was dying to hear it...but to no avail as I could not find that record anywhere. Thank goodness that a few months later, Carpenters Classics was released and I finally heard it. That said, I was never happy that it came out again on Made In America as to me, that was already a really old song - I heard it in 1979 and it was only now being officially released in one of their studio albums in 1981. I would have preferred Kiss Me... or one of the other songs that was recorded for MIA but only released posthumously.
M

After K&R decided not to release the 1979 album,A&M probably gave their international offices approval to include "I Believe You" on various compilations.But,that doesn't change the fact that it was intended for inclusion on that new 1979 album.

I'm glad "I Believe You" was included on MIA.It's one of K&R's finest recordings & probably the finest track on MIA.

And,think about this-can you imagine having a single that wound up never appearing on any album? "Santa Claus Is Coming To Town" was in that predicament for ten years-until it finally appeared on "An Old Fashioned Christmas".And , hundreds of thousands of people must have been frustrated during those ten years-going to a record store looking for that track,and realizing it's not available on any album.

I remember spying this at a record store locally here in Nashville... I can't recall when - surely before Karen's death...

I respectfully disagree with some of the opinions of the cover art. I didn't like it. To me - no matter Richard's thoughts on some of the covers, I always felt Carpenters albums were very tasteful looking, and unique in many ways... with the exception of AKOH - which as mentioned earlier, I felt looked dated with the wood trim and the big cheesy grins... very MOR.... (but even with Hush, the printed inner sleeve was cool...

This one looked - just not as understated and classic. To me, it looked like a TV compilation thrown together - - I even dislike the font on the words: The and Singles. Just not as refined in my estimation. Hard to imagine the same label that produced the Passage package - produced this one.

Finally, I liked the name, "The Singles". I recall thinking back in '73, that the title was again, a classier version than "greatest hits" and segmented K & R as artists with just a tad higher end taste level... Perhaps that is why I felt this cover art was lacking... Had I been in the decision maker, I might have paid more homage to the 73 album cover art and created a package that was more reminiscent of that design, so that a casual fan could have both LPs and had more of a 'library effect...

I agree. I think the cover art combined with the standard U.K. thin cardboard jacket made the package look a bit more 'budget line' than it should have looked. They also deserved another gate fold sleeve for this release. But that didn't hurt sales in England, as we all know it made it to #2. But I do like the inside sleeve.

However, original pressings were actually very high quality gold/silvery foil material, which does look very impressive! The pressings after first couple of runs were just a copy of the cover though.
A

Yeah, I've got one of the originals myself. Definitely catches the eye.

Another cd that I have mysteriously neglected to obtain. (I do have the vinyl)
So, I purchased one on Amazon,today.
I love this compilation.

Here's what the music critic had to say regarding this one (ugh!--I certainly disagree regarding Occupants)
The second hits compilation by the Carpenters wasn't dealing from strength nearly as much as its predecessor -- The Singles 1969-1973 represented tens of millions of radio plays, and songs that were impossible to avoid (nor would most of us have wanted to avoid them). The years covered on this album, by contrast, represent the point where the Carpenters' really big hits had stopped coming, though what is here comes off today as perfectly good, eminently listenable soft rock -- it's hard to get through their version of "Jambalaya" with a straight face, and "Calling Occupants of Interplanetary Craft" is still an unfortunate artifact of its time (which, ever more so, as the decades roll on, requires an explanation for listeners who weren't around at the time). But otherwise, it is great fun, even if the best material here isn't much more than an echo of the convergence of music, moment, and talent represented by the duo's first four years of work. ~ Bruce Eder

A favourite of mine, it was the first cd i ever bought - a few months before i even had a cd player.
I kept looking at it, knowing that when i had saved up enough to buy a cd player, it would be the first disc i played - which of course it was!

LondonRobert said:
Hey Harry!!
You are right! The 'THE' is written in black so it really does look as if it's meant to refer to 'THE singles', but as you say, they put it above 'Carpenters', it is a bit misleading!
Click to expand...

Hi all,
I just happened to look at the spine on my 1974 - 1978 singles cd and guess what - it says THE Carpenters!! So actually that is how it is meant to be all along - the 'THE' is actually referring to THE Carpenters and not THE Singles.
I thought i would just check the vinyl AND it says ' Carpenters' THE Singles!!! SO, its an anomaly...........
You must log in or register to reply here.