Thread Starter
By far the bulk of my time on the internet is spent researching this or that regarding some aspect of music from roughly 1955-70. Every once in awhile I re-review release or session listings of given labels to see if there’s a previously passed up recording that is now open to consideration.

Both artists only issued one solo LP in their respective recording careers. Although both artists are quite good, predictively both have essentially faded into obscurity sixty years on.

Gordon was a very young singer whose deeper alto, unique timbre and phrasing are instantly notable. On her date she is heard in the company of Jaki Byard, Ken McIntyre, and Ed Shaughnessy.

Sleet was a technically proficient and expressive trumpet player. Deeply Kenny Dorham influenced by way of Miles and Blue Mitchell, on his session he was paired in the front line with Jimmy Heath, along with Miles’ current bandmates James Cobb, Wyn Kelly and future bandmate, Ron Carter. Such high caliber artists underscore Sleet’s chops.

(Regrettably, however, Sleet’s gifted trumpet playing, good looks, and charismatic personality led to his downfall. Here’s what Sleet’s brother wrote about him years ago: "Sadly, Don fell into bad habits experimenting with drugs in the late 1950s and 1960s. I think his association with the in-group of established players in fast cities like New York and L.A. played a big role in his lifestyle of recreational drug use. Many of the jazz musicians he performed with were experimenting with drugs...no matter how much love and support a family provides, they cannot control outside influences. I still believe Don's substance use was the result of the friends he kept and the culture he was a part of. It was the conformity to a nightlife culture that he longed to be a part of".)

I recently secured inexpensive SS CD copies of both; and, happy to report, not only were both memorable on first listen — but on subsequent listens enjoyment continues to grow. Both are highly recommended for that delectable early-60s moody, hard-bop / post-bop transitional period. Each artist must have been on top of the world, as they say, upon hearing their respective excellent LPs upon release. Luckily, we have these living documents.

Staff member
Site Admin
Qobuz has some Honi. Spinning it now with an early lunch.

Impressive lineup on Sleet's album too.

Sadly, both of these are also "one and done" in terms of albums as leaders. Not surprising about Sleet's downfall either--so many went that route, and some were never able to overcome it.

Rudy said:
Sadly, both of these are also "one and done" in terms of albums as leaders.
Click to expand...

Unlike Blue Note, Prestige seemed to have a notable number of one-shots. I initially passed on these years ago simply based on the erroneous notion that a truly talented artist would minimally be given a second or third opportunity to "meet sales expectations" (e.g. Herbie Nichols at Blue Note). Subsequently for years, I unfairly passed over these and similar artists.

Staff member
Site Admin
I probably have dozens of artists, which are now favorites, that I wish I had discovered sooner. But there's so much music out there, and only a limited lifespan to hear it all in.

I'm stunned to see someone posting a thread on Honi Gordon. Her lp on Prestige has been a favorite of mine for years. In my opinion her verison of "Why Try And Change Me Now" is by far the best ever rendition of this fine Cy Coleman song. Sadly, there isn't much info about her on the internet. And it's unfortunate that Prestige didn't release a second lp by her. Thanks for posting the Sleet as well.

Thread Starter
Thanks, Moritat. As Rudy accurately pointed out: "there's so much music out there, and only a limited lifespan to hear it all in". It's rare that a day passes where I don't research a given musical artists for something. Prior to the internet, time was spent in the reference section of any given university library reviewing periodicals of the day and chasing release ID numbers in trade mags...

Thread Starter
If you like Honi, you may like Betty Roche (given she's an unfamiliar artist). She's an older singer who was "two and through" at Prestiege. The LP below, from 1961, was her final release. Near as I can tell, she was not devoted to a full-time music career. 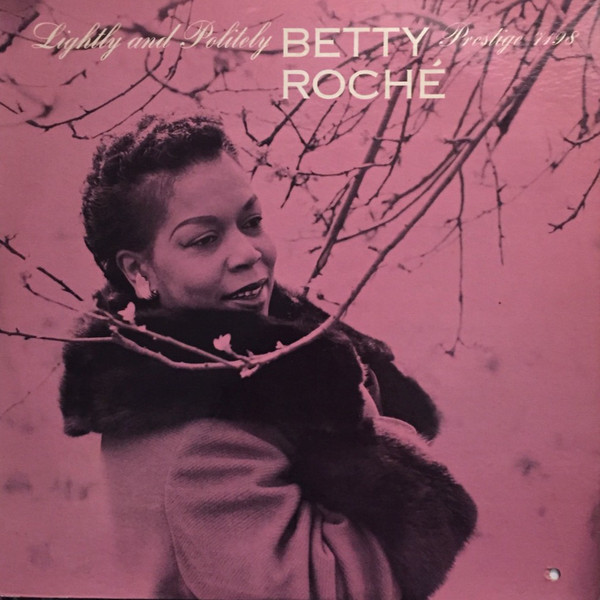