Finishing up my John Klemmer collection (hopefully!), I came across this rarity. This was a direct-to-disc release cut in 1979 for the Nautilus label. 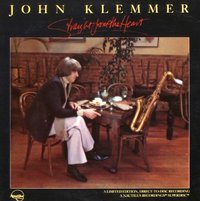 Back when I used to hang out at the audio stores regularly and peruse their bins of direct-to-disc and half-speed-mastered titles, I never came across this one. The tunes come from a handful of recent albums such as Touch, Brazilia and Arabesque, and he covers Gershwin's "Summertime" in his own unique way, with an arrangement of this tune that I can actually live with (I'm not a fan of Gershwin by any stretch of the imagination). Klemmer sets it to a Brazilian mode with acoustic guitar, bass and percussion, with his unbridled sax interjections that keep it exciting outside of its usual plodding, monotonous melody. The title track from Touch is done in a new double-time Brazilian-themed arrangement that completely changes its feel. What's notable about the performance is that the musicians sound relaxed and unrestrained, especially Klemmer. Usually on direct-to-disc recordings, the performers sound restrained and uptight, as flubbing a single note means the entire side of the record had to be cut again. (And on this gig, someone had flubbed a passage on "Arabesque," causing the entire side to be scrapped.)

Notable on this gig is Oscar Castro-Neves on guitar; he and Klemmer recorded a duo album, Sympatico, together, released in 1997. Also on this record are Roy McCurdy (drums), Bob Magnusson (bass), Ray Armando (percussion) and Milcho Leviev (keys).

This copy isn't the cleanest (even after a couple of trips through the Degritter) but it does sound quite good. Thank vinyl mastering legend Stan Ricker for the nice cut. And the performances are spontaneous and unedited, as the peformance was recorded live in real time. I'm surprised it never had a CD release--most of these direct-to-disc sessions had a tape machine running simultaneously. Yet, who knows where many of these recordings have ended up? Nautilus has been out of business for decades. Regardless, if you are a fan of Klemmer's and can find a copy, pick it up!
Click to expand...
You must log in or register to reply here.