Found a couple of 12-inch Sergios and The Real Thing*

Staff member
Site Admin
Thread Starter
While trolling eBay a week or so ago, I spotted a seller with two different 12-inch records of Sergio Mendes from the '80s.

One was "Voodoo" (A&M SP-12068), which had a "specially remixed version" on one side and an instrumental version on the other side.

I was never overly fond of "Dance Attack", but I like "Voodoo" in its various incarnations (or is that 'incantations'?).

interesting ..great to have all of this for our Collection!!

Voodoo was one of the most intrigueing tracks sergio did at the time I never knew there were 12 Inch versions of anything by sergio until now I still enjoy those occasional instrumentals he did. In the 60 s and onward. But im happy you found some more treasures.

Staff member
Site Admin
Thread Starter
From the Brain Cells Dying Off Department, I came home for a short trip to find a latest eBay purchase awaiting me. I'd seen the item and bought it rather quickly - not realizing that I'd bought this very same "Voodoo" 12" single a year ago. I had no memories of it at all. When I went to start a thread here extolling its virtues, I found that indeed, I'd purchased the same record AND posted about it a year ago.

The newer one is in nice shape - I haven't had the heart to check the older one...

Staff member
Site Admin
Wow...I had that 12" since it was first released. I stumbled across a used promo in the discount bin at Car City Classics IIRC.

Staff member
Moderator
My favorite 12-inch was "The Real Thing" by Sergio Mendes & The New Brasil '77. Bought it back when it was released. Just about played the grooves off of it. Don't recall what was on the B-side, but I think it was an instrumental.

Whatever the case, it was awesome.

Staff member
Site Admin
We should probably change the thread title. I keep thinking of this little Sergio dude, about a foot tall...

Staff member
Site Admin
Thread Starter
Listening this morning to THE NEW SERGIO MENDES AND BRASIL '77 album, I got to "The Real Thing" and thought about the 12" single that I never got and had never heard.

So I looked it up on YouTube and there are a couple of iterations of it there, and I gave it a listen. To me, it didn't seem all that different from the album version, so I started a comparison using Audacity.

Laying the 12" tracks down first and then the album version underneath, I could see the difference in length immediately. The 12" runs close to 6 minutes and the album version runs 4:43. After a slight speed adjustment, I tracked the two simultaneously and they stayed together all the way through, with the album version fading out sooner.

There's a section of "doot-doot-oot-doo-doos" at the end that seems to be repeated on the longer version. I can't tell if it's looped or a real extension. Anyway, with some editing and repetition, one can make the long version from the CD master.

Staff member
Moderator
I was never a fan of "disco Sergio," but "The Real Thing" is one of my favorite songs from that era. It's catchy. My real faves on the New Brasil '77 album are the instrumentals, especially "Mozambique." I always like any Sergio song with wordless vocals in it. That'd make a nice playlist, actually....wordless-vocals songs. [[ heads off to computer room ]]

I really like this "extended mix" of "The Real Thing". I've always thought the album cut was way too short.

Contributor
Great song...
But too fast, wrong key. To my ear, anyway.
So I brought it back to the original key and tempo.

Staff member
Site Admin
Depending on who remixed a 12", they occasionally sped up the tune. I can think of a couple on A&M that were sped up--"Strawberry Letter #23" up half a tone, and Bryan Adams' "Let Me Take You Dancing" by a full tone. 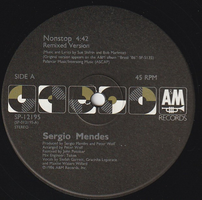 In this area, once a couple of songs from Vintage 74 had their run of airplay, I never heard any new Sergio Mendes songs until Never Gonna Let You Go, Alibis and Take This Love. I really liked the latter.

rockdoctor said:
In this area, once a couple of songs from Vintage 74 had their run of airplay, I never heard any new Sergio Mendes songs until Never Gonna Let You Go, Alibis and Take This Love. I really liked the latter.
Click to expand...

I only ever heard "Never Gonna Let You Go" on the radio here. None of the other tracks ever made a dent on our local stations. The only 70s album tracks I ever heard were from Home Cooking.
You must log in or register to reply here.