Thought it was the 1972 Carol Burnett Columbia Records album.

AM Matt said:
Thought it was the 1972 Carol Burnett Columbia Records album.
Click to expand... 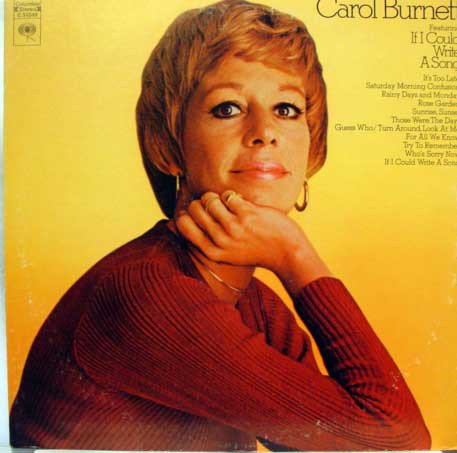 Industry Member
NO idea how I ended up here back here after many years, but....hello.

In 1973, Liza Minnelli was everywhere. She'd just won an Oscar and Emmy, truly at the peak of her popularity. A&M owned these masters - why wouldn't they give her a Foursider collection and try to sell some records? It's not the Peter Allen connection - his albums came later.....

A&Mguyfromwayback said:
NO idea how I ended up here back here after many years, but....hello.
Click to expand...

A&Mguyfromwayback said:
A&M owned these masters - why wouldn't they give her a Foursider collection and try to sell some records?
Click to expand...

True. They probably had high hopes that her records might become more popular as well, so were willing to take a gamble. Whereas other early acts like Chris Montez and Claudine Longet didn't get a Foursider--maybe by that point, the ship had sailed.
A

GDB2LV said:
The cd Results with PSB probably her best seller. Not on A&M though. Losing My Mind, Rent, and Twisting My Sobriety were all singles. The first one got airplay. The rest probably only in England. It’s an 80’s dance pop collection. Actually a pretty good album.
Click to expand...

I was only listening to 'Results' the day before yesterday. It's a very satisfying album. It has a great range of styles on it, from the late-80s dance style, to tracks that are a bit more arty and left-of-centre, to a couple of ballady, semi-music-hall songs. An interesting mix.

'Losing My Mind' is magnificent.

Liza Minnelli never went in for pop as such, (until 'Results'), which would explain the fact that she didn't have hits on Top 40 radio.

However, I thought that 'Results' might have had greater success in the USA. In Europe, apparently it sold nearly a million copies. It had a high number of sales in the UK. In the USA, it sold something like 200,000.
R

Another possibility of why other artists did not get Foursider lp's is that maybe they did not want them. The people that did the compiling of the songs may have asked these 5 artists and they gave the okay but others did not.
You must log in or register to reply here.