Thread Starter
Jazz critic Marc Myers has some holiday gift suggestions including the above record. He said Verve did a splendid job reproducing the sound--far better than what was around decades ago on vinyl. The master tape must still be in decent shape.

Staff member
Site Admin
I don't know what version he's referring to (this thing is reissued every few years), but the go-to version is the 45 RPM set on Analogue Productions, mastered by George Marino at Sterling Sound back in 2011: 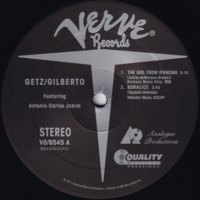 But good luck finding a set now, as it's awaiting a repress and copies with shipping are probably close to $100 now. There is the SACD by Analogue Productions (still available, $30) as well as downloadable DSD files with the same mastering, which is good if you like the album enough to spend that much.

It depends on who mastered the recent Verve reissue, plus their pressing quality leaves much to be desired. (I have yet to own any Universal product that isn't fundamentally flawed in some way--if they get the mastering right, the vinyl is noisy, or the mastering sucks and the vinyl is halfway decent! Even the recent Stonebone is flawed--a local pal and myself both have one where side two is noisy.)

Staff member
Site Admin
My copy of that album is a CD from 1997, a Verve Master Edition: 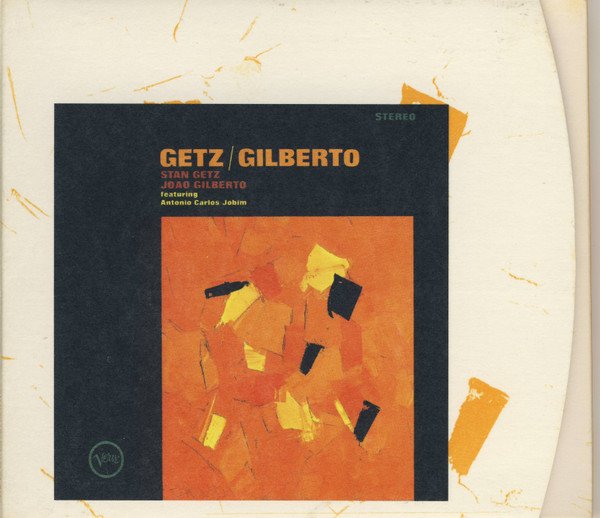 View credits, reviews, tracks and shop for the CD release of "Getz / Gilberto" on Discogs. 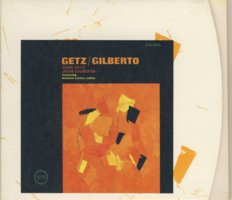 Staff member
Site Admin
Verve's SACD from the mid 2000s was too bright, and I believe the channels were reversed on that one as well.
L

Thread Starter
Refer to the the "Acoustic Sounds Series" link below. The reissue has to be quite current as the article was published June 11, 2020. It says the Getz/Gilberto album was mastered from the original analogue tapes and pressed on 180-g vinyl.

Staff member
Site Admin
Excellent! That's good to read, then. With Analogue Productions behind that newest release, it would sound as good as it gets. Too bad they didn't do it at 45 RPM, but I doubt Universal has any interest in that.

Acoustic Sounds is the online sales operation, Analogue Productions their record label, and they operate Quality Record Pressing (QRP) for record production as well as Sterling Sound for mastering and cutting lacquers, which they very recently purchased and moved to Salina, Kansas as part of their operations. That gives Chad Kassem everything in-house that he needs to create series like these, both for his own Analogue Productions label and contracted deals with other labels such as this Universal series he is spearheading.

Rudy said:
Too bad they didn't do it at 45 RPM, but I doubt Universal has any interest in that.
Click to expand...

The 45 RPM version from a few years ago is still available, as is Jazz Samba. I wish there were a good vinyl reissue of the album with Laurindo Almeida.

Staff member
Site Admin
I have a preorder in for Ray Charles: Genius + Soul = Jazz. It's the latest in the Verve/Acoustic Sounds series, along with Gil Evans' Out of the Cool. (I'm not as fond of Gil Evans, so I'm passing on that one. I have that album on another vinyl pressing and honestly never warmed to Evans' arrangements.)
L

Thread Starter
Here is a song I hugely enjoy: "One Mint Julep" from the aforementioned Ray Charles album reissue. For me, you can't beat the big band sound with a swinging arrangement. Quincy Jones magnificently wrote this 1961 arrangement. In the 1960s he was closely associated with the Count Basie band and won a 1963 Grammy for his arrangement of Basie's version of "I Can't Stop Loving You", which coincidently was a No. 1 hit for Ray Charles in 1962.
L

Thread Starter
Forgot to post the above video. Here goes.

Thread Starter
It dawned on me that this arrangement for "One Mint Julep" has a Cuban mambo vibe to it a la Perez Prado. I like that sound. Jobim once said that Latin America essentially has two kinds of music--one from Cuba and the other from Brazil.

Staff member
Site Admin
That was a neat era. Quincy was all over a bunch of records back then with Basie. He had the three with Sinatra, this Ray Charles record, Our Shining Hour with Sammy Davis Jr., Ella and Basie! with Ella Fitzgerald, three with the Count Basie Orchestra Li'l Ol' Groovemaker...Basie!, This Time by Basie!, and Live at the Sands (Before Frank) which was a collection of charts by the Basie orchestra prior to the Sinatra at the Sands recording, released in 1998. Not to mention a fourth Basie LP in 1959 on Roulette, Basie One More Time which may have been their first album together. Those 1963 albums were like a last gasp for the Basie outfit in terms of popularity, as once he left Verve, he would hop labels regularly.
L

Thread Starter
When I hear Ray Charles terrific organ playing on "One Mint Julep", I think of jazz organist Wild Bill Davis. In 1956 Count Basie used Davis' chart for "April in Paris" and made it into a Basie standard. Whenever I hear Basie's "April in Paris" I get goose bumps. It has to be on my list of personal top 10 favorite recordings ever. I love the way the song keeps building and building into that brilliant brassy crescendo at the end. I never heard a more exciting ending to a song. And the band plays it twice thanks to the Count's memorable "one more time" and "let's try it one more once". That's like icing on the cake from the one and only Count Basie.

Thread Starter
Here is another classic video done live with Basie and his Orch., and Quincy conducting with his arrangement, and Sinatra. You can't find bigger talent under one roof than that! The song is one of signature songs: "Fly Me To the Moon."

Staff member
Site Admin
Looks like the window of opportunity on this LP reissue has passed--the only copies available now are from the price gougers. Cheapest on Amazon is $75, whereas the cheapest Discogs version in the US is $40. It also looks like the Gil Evans Out of the Cool I mentioned above is also in short supply, and it's only been out for a week. (Amazon shows an available date in mid-June--in other words, sold out. And Discogs prices on remaining copies are already escalating.)

The same thing has been happening with Blue Note's "Classic Vinyl" series--they're released in such small numbers that some titles have sold out in less than a month.
L

Thread Starter
Here's a current interview of Quincy Jones. He elaborates on the aforementioned "Fly Me to the Moon" with Sinatra and Basie.

THR Icon: Quincy Jones Reflects on Career, Michael Jackson and Why He Wouldn’t Work With Elvis

The musical maestro inaugurates the THR Icon series with his famously candid takes on Hollywood racism and drug use, his formidable exes and his powerful Silicon Valley pals: "Richard Branson and Paul Allen and Elon are trying to get me to go with them to space."

www.hollywoodreporter.com
You must log in or register to reply here.