Thread Starter
I found this album in discogs and ordered. Shipping from Australia. Released 1974

brown cover that looks like Singles but says:
Great Hits of the Carpenters Volume II 1969-1973

track listing is:
Top of the World
Sing
Live is Surrender
(A place to) Hideaway
Hurting each other
This Masquerade

Anyone else have this?
Jonathan
T

Staff member
Site Admin
^...and utilized the artwork from the standard SINGLES 1969-1973. 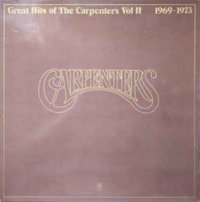 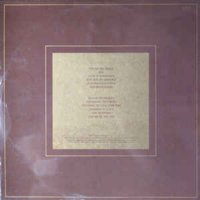 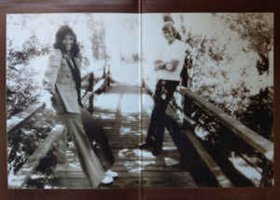 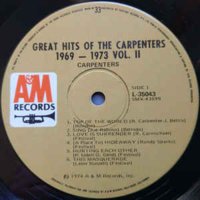 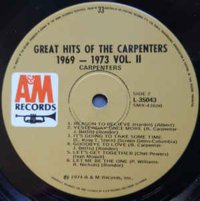 The version of “Top Of The World” on GH2, is it the album or single version?
A

In Australia, we got 'Great Hits of the Carpenters', (the 'Volume 1' version), in 1972, to coincide with the May 1972 tour. The same album was also released in Japan, entitled 'Golden Prize' but with the same cover and inside art and the same track listing.

'Great Hits of The Carpenters', (the first version), reached Number 3 on the Australian charts after its mid-May entry and stayed on the charts for 10 months. It became the 16th biggest-selling album of 1972.

'Hurting Each Other' was also released to coincide with the 1972 tour, reaching Number 4 nationally, staying on the charts for 7 months and becoming the 23rd biggest hit of the year.

'Great Hits Vol 2' did not fare as well on the charts in Australia as the first volume, peaking at Number 24 after entering on 1st of April, 1974 and staying on the listings for 4 and a half months.

'Top of the World', (album version), was released as a single in Australia at the beginning of 1973, about nine months before America, from memory. It peaked at Number 1, staying at the top spot, I think, for four weeks, after entering on 5th of February 1973 and remaining on the charts for 7 months, becoming the 14th biggest hit of 1973 in the country.

In Australia, we didn't get the re-recorded versions of 'Top of the World' and 'Ticket to Ride' until 'Very Best of The Carpenters' was released in 1982. This album hit Number One on the national charts in early 1983.
T

So I guess Australia wasn’t like Japan where Japan got both the album and 1973 re-record of TOTW on 45?
A

tomswift2002 said:
So I guess Australia wasn’t like Japan where Japan got both the album and 1973 re-record of TOTW on 45?
Click to expand...

No, the re-recording of ‘Top Of the World’ was not released on 45 in Australia - only the album version, (from ‘A Song For you’).
You must log in or register to reply here.