Has anyone seen or heard this Lani Hall Record from Japan???

Staff member
Moderator
Thread Starter
If so, I'd be curious to know how it is. Is it worth the 16 bucks this "buy-it-now" seller is charging???

Staff member
Moderator
I have this track on Lo Mejor De Lani CD37018, produced by Jose Quintana and Juan Carlos Calderon. It originally appeared on the 1982 Lani album - my copy is a Mexican pressing released by Ariola and the track is titled Sergio Mendes Medley.

These are the tunes in the medley: Agua De Beber, Mas Que Nada, O Pato, One Note Samba/Spanish Flea, Laia Ladaia, Fool On The Hill.

Staff member
Moderator
Thread Starter
The I have heard it, as I have both Lani and Lo Mejor. I thought it was some Japan-only release as foreign packaging and sleeve designs can be misleading...

There's no address anywhere in the folded-over booklet, but there is some airbrushing where this Polygram copyright notice is printed between Lani's lips and chin on the large black & white photo

I found that compilation in a Wee Three Record store, just as I was about to leave after finding nothing. The Latin Music section was near the checkout counter, and as I walked by, I spotted this disc in the racks. Until then, I'd only ever heard Lani's Spanish stuff via cassette, so this was a good find for me. I think it was around $10 - worth every penny.

Staff member
Site Admin
Now this thread is 14 years old, but I've finally snagged a copy of this 12" from Japan. It arrived today and is in first-class shape, probably never played. There aren't even any ring-wear marks on the cover, which retains its original obi.

The 12" single plays at 45 RPM and contains the 6-minute medley on Side One, with "Es Facil Amar (album version) on Side Two. It's a promotional record with the white Japanese promotional sticker on the back. I'm thinking that this must have been released as a single when LO MEJOR DE LANI was released, otherwise when the medley appeared on the first Latin album, LANI, the song "Es Facil Amar" wasn't around yet. That came two albums later. But both songs appeared on the compilation, LO MEJOR DE LANI.

If you haven't heard the medley, I've put it up on YouTube: 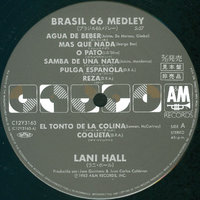 Man, what a VOICE she has! This was made probably around the time Herb was making FANDANGO. Proof is Jose Quintana and Juan Carlos Calderon, who also produced that album worked on this effort as well, and this medley reminds me of Herb's LATIN MEDLEY from FANDANGO, and the year is 1982, the year both albums came out.
Last edited: Aug 26, 2020

I watched it on YouTube: Lani Hall 1982 Sergio Mendes Medley. I’ve loved her since I was about 12 yrs old. One of the most beautiful voices.

These are very good arrangements. It sounds as if it was part of the arrangement for the medley in Fandango. Of course, when you have Calderon arranging you can only expect top-quality stuff.
M

Here is a music video with that performance:
You must log in or register to reply here.