Herb in the Wall Street Journal

Trumpeter-producer Herb Alpert, 78, has won eight Grammy awards and is the only recording artist to have a No. 1 hit as a vocalist ("This Guy's in Love With You," 1968) and as an instrumentalist ("Rise," 1979). His new album is "Steppin' Out" (Shout Factory!). He spoke with reporter Marc Myers.

Soon after Jerry Moss and I formed A&M Records in 1962, we released our first single—my record of "The Lonely Bull" with the Tijuana Brass. It was a hit, and as more singles and albums followed, I moved from West Hollywood to Malibu. Finally I could afford to live near the water, with the Pacific as an endless backyard. As the '60s progressed, A&M became increasingly successful thanks to the Tijuana Brass, Sergio Mendes, the Carpenters and many other artists.

One day in 1971, my secretary told me that a movie director she knew who lived on 6 acres at the northern end of Malibu had died. His son inherited the land and was planning to develop 25 lots on the property. But when the California Coastal Commission was formed in late 1972, it rejected his proposal, leaving him stuck. Somehow, he heard I might be interested and called to see if I wanted to buy the property. 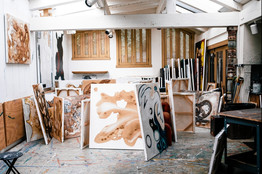 His home includes an art space. Annie Tritt for The Wall Street Journal

Actually, I was happy where I was living and hadn't really thought about buying that much land. Besides, the director's house was an hour's drive to A&M's offices on Sunset Boulevard. I put him off. Then one night he called in desperation. Since he couldn't develop the property, it was becoming a financial burden. I offered him half his asking price in cash. He accepted and we closed in June 1974.

That December, singer Lani Hall and I were married on the property. Over the next couple of years, we found we wanted to expand the 5,000-square-foot house and personalize the space. 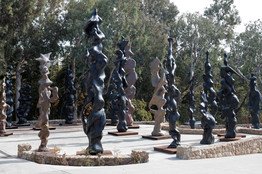 His large home allows him to indulge in his many creative projects, including his giant outdoor sculptures. Annie Tritt for The Wall Street Journal

During my drives home from L.A. in 1976, I watched as Bob Dylan's house went up in Malibu's Point Dume area. Eventually I pulled over and walked up to the site to have a closer look. I loved it. The structure had a natural, cozy feel with lots of woodwork and curves. You just wanted to touch and hug parts of it. I met with Bob's landscape architects and designer and hired them to work on our place.

Lani and I, with the help of several artisans, designed a one-story, 12,000-square-foot house perched in the middle of the property, giving us a panoramic view of the ocean from the living areas. Work on the house was completed in 1978, but a few years later we wanted to add studio space. I needed a recording studio where I could practice my trumpet day or night without disturbing anyone. I also needed dedicated space to paint—which I had been doing since 1969.

First came the recording studio in the early 1980s. We converted our two-car garage into a soundproof room paneled with pine—a soft wood that seems to allow music to resonate beautifully. We also made sure the walls weren't exactly parallel, since that would have trapped the sound.

My painting studio came a few years later. It's a doorway away from my recording space. We installed large, angled dormer windows high above the floor to let in lots of light. They also give the space an inspiring, artsy feel. Now I'm painting with coffee on gesso-primed canvas, and the coffee's acidity creates fascinating organic results.

We also added a sculpting studio in the mid-1980s. It's a stand-alone structure with 12-foot ceilings and skylights that's a short walk from the house. My abstract sculptures range in height from a few feet to 18 feet tall. I sculpt the larger ones outside.

I start by making a small wax model followed by a clay model. Then I have a team create a structure that holds the clay in place for the final version, ensuring it will stand when completed. When I work on the sculpture, I move up and down on a forklift. Each morning I wake up at 6:30 and start with a few hours of painting. Then I practice my horn and spend the afternoon sculpting. Lani is my curator and muse, and has always been supportive.

We don't often have a lot of people over. It's not a party house. It's just a nice, friendly space for us to work and relax. Back when I originally researched the property, I discovered that the land was considered a spiritual place for the Chumash—a Native-American tribe that lived in the region hundreds of years ago. I think that same feeling is here today.

In December, Lani and I will be married 39 years. People ask about our secrets for a long Los Angeles marriage. Respecting and appreciating each other's qualities is a big part of it. A property with a long positive history isn't bad either.