Now, on another matter. As I listened to that video, I thought something sounded off. Herb's vocal sounded odd, like it wasn't focused. So I dug out the old PhaseBug tool, and sure enough, this track - on every version ever released - has HAECO-CSG, even though the rest of the album does not.

A simple phase shift of 90° on one channel, or 45° on both, will bring the vocal back into center focus.

It appears that it was done that way for the 45 single as the CSG legend appears there: 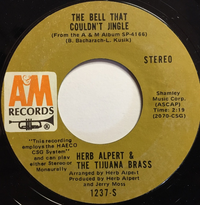 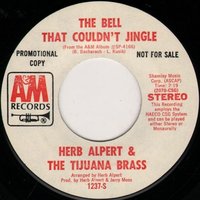 Ain't THAT a kick in the head!

It makes sense as this was around the time that A&M began experimenting with releasing stuff with the CSG processing.

The track sounds so much better with the CSG phase shift corrected.

Staff member
Site Admin
Have a listen to the corrected version:

Staff member
Moderator
This is one of my favorite Christmas songs by any artist. I always thought Herb would have done well to try a few more "uptempo" vocal tunes instead of just sticking with ballads.

This song also has the distinction of having (in my estimation) the smallest amount of Herb Alpert trumpet of any of his TJB vocal songs. There are only about 10 seconds of trumpet on this song. Are there any with less?

Contributor
Interesting that Herb's official channel decided to do a video for this 54-year-old track. Is something up with the '68 CHRISTMAS ALBUM? Was it remastered along with the other A&M albums? I've forgotten.

Staff member
Site Admin
Correct. Went to a Barnes & Noble in the Schaumburg area of Illinois to get them when released around Thanksgiving.

What's with the 2:19 timing listed on the single?

rbisherw said:
What's with the 2:19 timing listed on the single?
Click to expand...

The single probably eliminated the chorale opening. That edit brings it down to 2:19

Staff member
Moderator
Thread Starter
Radio requested the video and that's how it came to be done. It will get good exposure!

Steve Sidoruk said:
Radio requested the video and that's how it came to be done. It will get good exposure!
Click to expand...

Steve, sorry to be dense, but why would radio request the video---and which radio? Individual stations running Christmas formats or a chain like iHeart or Audacy?

Staff member
Moderator
Thread Starter
I Heart - for multiple Holiday format stations.
You must log in or register to reply here.

TJB tunes that never had been released on records or CD

New single from Herb, "All I Want For Christmas"