It was 55 years ago today that I got my first two Herb Alpert albums for Christmas!

Thread Starter
My aunt gave me "Going Places" and "What Now My Love" on Christmas 1967. Those were my first 2 records ever! My folks gave me my first record player that Christmas too, a GE portable. I was really happy! I definitely had great taste early on!

Staff member
Site Admin
Then in would be 56 years for me with nearly the same story. My parents gave me a Motorola portable stereo record player, and three Herb Alpert & The Tijuana Brass album: SOUTH OF THE BORDER, WHAT NOW MY LOVE; and GOING PLACES. If I recall correctly, GOING PLACES was a mono copy. I think they may have picked that one up before they decided to get me a stereo.

Thread Starter
Wow! Very cool Harry! I forgot to add that those were not just my first HA albums but my first ever records of any kind. Now thousands later...yikes!

Staff member
Moderator
I bought my first Herb album, Going Places, for my mom for Mother's Day, in 1966. I was 9 years old. I bought Mom the record because she had told me to watch the TV special that was airing that spring. Of course, I played the record more than she ever did and made my family sick of it.

I bought my "own" first TJB album, What Now My Love, some months later.

Those were the first and second LPs I bought for myself. I think the next A&M-related item I had after that was the Music Box album.

Up to that point I'd listened to a lot of Mom and Dad's "easy listening" music like Lester Lanin, the Three Suns, Hugo Winterhalter, Patti Page, Roger WIlliams, and a few others, plus of course I had a stash of kids records that I played to death. I also listened to a lot of Guy Lombardo, Lawrence Welk and Martin Denny at my grandparents' house.

Staff member
Site Admin
I think I already had mono copies of WHIPPED CREAM & OTHER DELIGHTS and THE LONELY BULL, so those got turns on the new phono too that Christmas day. Four whole albums to rotate on the new record player, all by the same artist. On that day I became a collector, I believe.

It was shortly thereafter that I was given S.R.O., probably for my January birthday.

Staff member
Site Admin
My first 45 RPM record that wasn't a "kiddie" record was the single from Herb's Xmas album ("Christmas Song" b/w "Favorite Things"). Judged by the condition it's in, it had a lot of play, as I wasn't allowed to play the stereo LP when we got it two years later along with our stereo Magnavox console.

And that year was also when I got the portable GE record player--that single was part of the gift. I might still have that thing somewhere. This is the closest image I can find of what I had, as I'm working from memory. 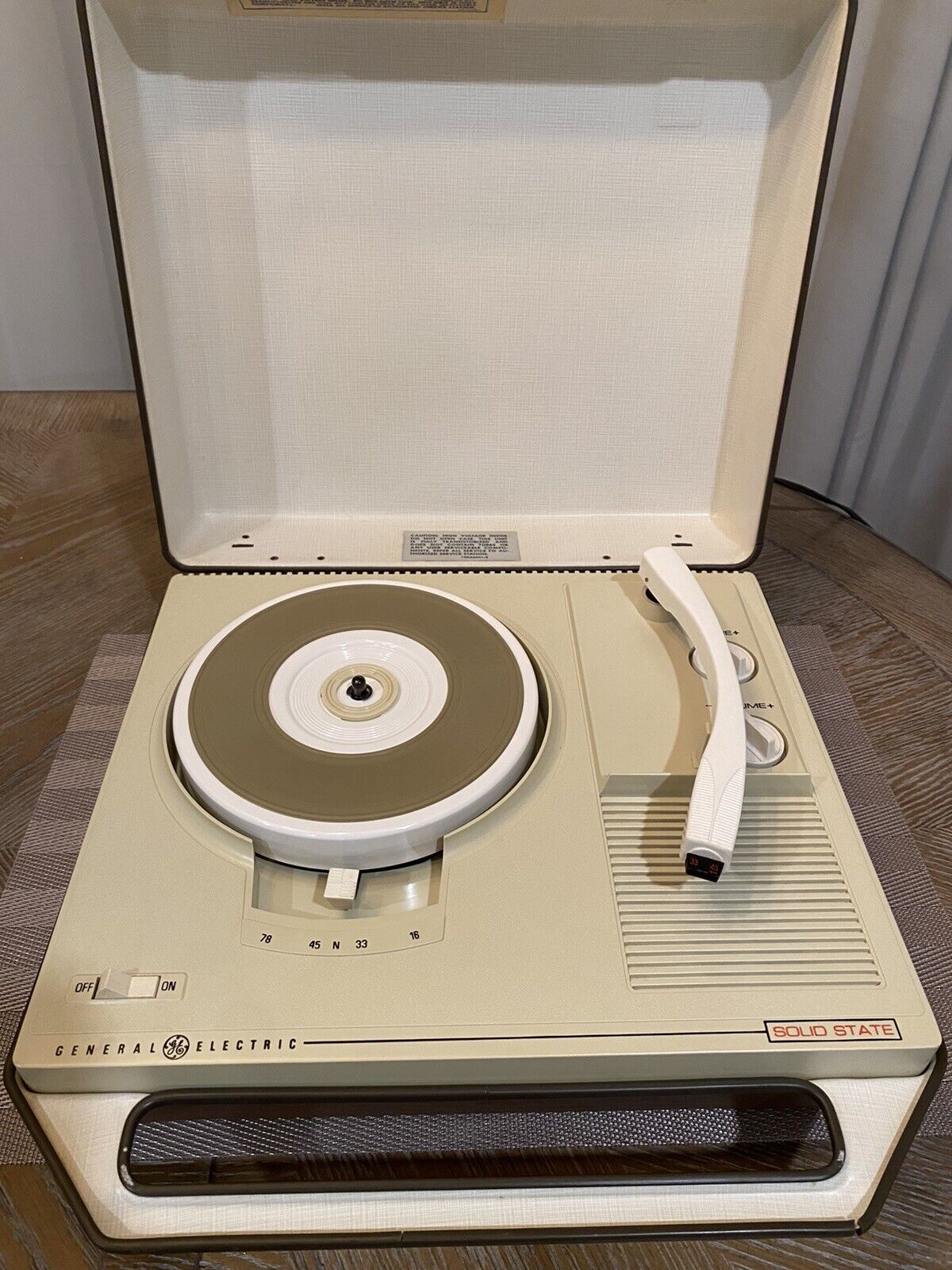 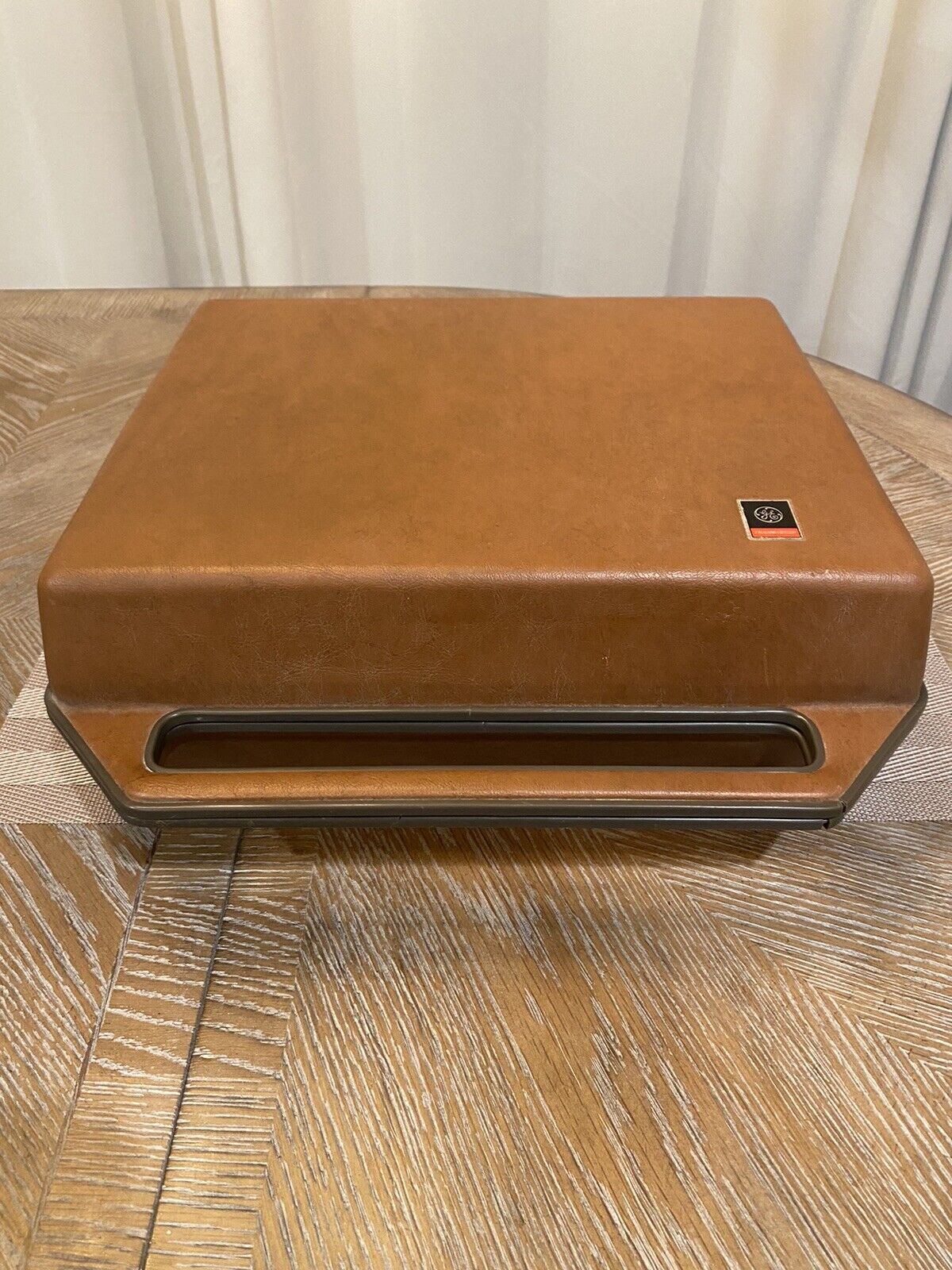 Staff member
Site Admin
This is the closest thing I can find to my old stereo: It was all molded plastic except for the metal turntable parts. The turntable folded up and the speakers folded in over it. The handle made it "portable".

Staff member
Moderator
This was mine (kept in my bedroom) from 1971 when I "found" music... I'd lay with my head between the speakers to be fully absorbed in cool stereophonic amazement!

Of course, if I was in the living room, I'd use my parents' big console unit which was essentially a piece of furniture...

Later in the 70's but before I joined the Navy I acquired one of those all-in-one units with a radio, 8-track and cassette in the front and turntable on top. After being in the Navy a while, I became an audio snob and went the component route...

Staff member
Site Admin
Yep. Once in awhile, I used to hold the detached speakers up to my head with the volume turned down low enough to simulate headphones! The stereo separation that way was amazing.

Staff member
Moderator
One year I asked for a phonograph for Christmas, and really emphasized to my folks that I really wanted one bad. So what did they do? They gave a phonograph to my two sisters. I couldn't help throwing a bit of a "How could you?!" fit, and reminded them and I, not they, was the one asking for the phonograph. To calm me down, Dad handed me this heavy-ish present and said "Here, open this, it'll make you feel better." It wasn't big enough to be another phonograph. So I opened it up, and it was a much cooler Lear Jet Stereo portable 8-track player. I was pretty sheepish.

The only real downside to that machine was, it didn't automatically switch channels -- you had to do that yourself. A year or so later Lear Jet came out with an upgraded model that had the channel switching function built in, so I sold my original machine and got that one.

That was the machine I played most of my Herb tapes on, since it proved too difficult to get the family to agree with playing them in the car! That's also the machine that chewed up most of those black plastic tapes of the mid-period TJB albums I had. At the time I blamed it on the fact they had to sit vertically in the machine, until later when I found out that they were just crap tapes. I remember having Warm, Beat of the Brass, The Brass Are Comin', Christmas Album, Greatest Hits, and Warm on the better-quality olive-green cartridges. Harry said:
The handle made it "portable"
Click to expand...

Once, round about 1983, while repairing our 12" portable TV, my dad proclaimed: Sears would stick a handle on a refrigerator and call it portable!

Staff member
Moderator
Heck I remember 19" TVs that were "portable" with a handle on top. Not only did it take two people to lift it safely, the handle probably would pop off if you actually used it to lift the thing!

Staff member
Site Admin
The "old" TV we had, my oldest memory, was a tubed black and white Zenith which had a handle that looked more like a formality than anything else. It didn't even have UHF. I think in later years I was able to lift it by the handle, but it's not something I'd have made a habit out of...she weren't all that strong!

Thread Starter
This is the record player I had as I recall it..

I started out very similarly... I received an RCA portable record player for Christmas in 1966 when I was six years old. As part of the present, I got to pick any two albums I wanted. I chose Herb's "SRO" and the New Vaudeville Band's "Winchester Cathedral."

There are a lot of parallels in our histories. In 1969 my biggest wish for Christmas was an LP with Herb Alpert and the TJB. I had been listening to him on the radio, and in the school's marching band, where I was admitted in the spring of 69, we played "Mexican Shuffle" and "Cinco De Mayo". The arrangements were published by Hal Leonard, and under the titles on the sheet music it said "A Herb Alpert Arrangement".
On Christmas Eve (In Norway we don't wait till Christmas morning)I unwrapped a package that looked very much like an LP, and indeed it was "America"(the budget compilation) by Herb Alpert & the Tijuana Brass". I loved it, and a few weeks later, in January right after my 11th birthday I got "Going Places" which was even better of course...
As far as equipment was concerned my grandmother, who lived with us at the time, had a small Garrard record player connected to her radio. After Christmas in 69 I more or less took it over.

- greetings from the cold and very snowy north -
Martin

martin said:
and indeed it was "America"(the budget compilation) by Herb Alpert & the Tijuana Brass"
Click to expand...

This one I suppose: 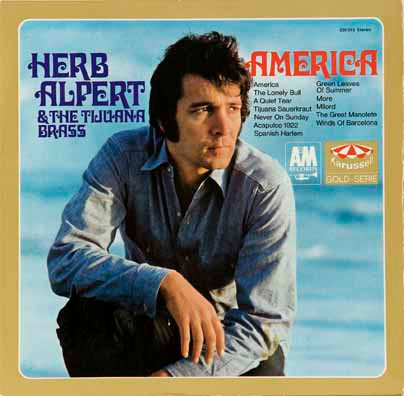 It's kind of a mash-up of THE LONELY BULL and VOLUME 2.

Harry said:
This one I suppose:

It's kind of a mash-up of THE LONELY BULL and VOLUME 2.
Click to expand...

That's right. The German Karussel version with liner notes in German. The only difference is the front cover photo which is earlier than this one. It's one of the photos used at the back cover of Ninth, I believe. It can be viewed here: Herb Alpert & The Tijuana Brass - America
You must log in or register to reply here.