GDB2LV said:
Guess they spent their budget in red vinyl instead......
Click to expand...

Just odd because usually these things are obsessively correct. 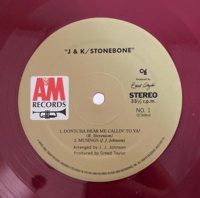 Ah....which I'd never seen. And since that's the one that actually made it into print, that'd be the one they'd attempt to re-create.

In the words of that great record archivist, Emily Litella, "never mind."

Staff member
Site Admin
It appears on Discogs that this release got a gatefold. Can anyone confirm that?

Staff member
Site Admin
I wouldn't see why not, if it's a new photo posted. Any 50 year old copies won't be that clean.

Staff member
Site Admin
I've had confirmation that the new STONEBONE is, in fact, a gatefold. Mine's supposedly arriving on Monday, but with the slowness of the US Snail Mail, you never know.

Staff member
Site Admin
I haven't listened at too high of a volume yet, but my copy doesn't seem to be very noisy at all. The few things I'm hearing might possibly be dirt, and I would need to run this through the ultrasonic and vacuum process to get it out. (I have a stack I need to clean one of these days.) Musically it's more like the post-A&M recordings on CTi, getting more into that soul jazz mode. Seems to be mastered well. Not bad for a 50 year old record, but thankfully it's been reissued as it certainly isn't anything I'd spend more than $25 on, let alone $500 for some rare copy.

Well, how about this! A&M/CTi pulls a Blue Note!

1968 was The Year for A&M/CTi. According to Doug Payne’s CTi website, all 1968 Creed / Van Gelder LP sessions saw release — which essentially covers 15 LPs (SP-3005 to SP-3019) of the 27 that actually saw release during the 1967-70 A&M/CTi period. The slew of 1968 sessions probably occurred given the good fortune with the first three releases (Wes, Jobim, and Mann). Of course, sometime in early 1969 the A&M—CTi (or, speculating, the Creed Taylor—Jerry Moss) relationship may have headed south (…of more than just the border) given that, with the exception of Wes, the 1968 batch of 15 LPs did not sustain the financial rewards consistent with the first three releases that kicked-off the enterprise.

From the start, A&M/CTi LPs were probably too jazzy for the majority of the TJB/BMB pop crowd while they were obviously too "pop" by far for the majority of the Coltrane/Mingus crowd. Both Wes Montgomery and Herbie Mann were commercially successful at walking that mid-'60s pop—jazz tightrope, but most jazz artists' similar attempts did not yield the same fortune; as a result, with the exception of Wes (and later, Benson) most A&M/CTi LPs probably didn’t sell in the hoped quantities. The expensive packaging also didn’t help financial matters.

To further muddy the water, some of the A&M/CTi LPs were outright straight-ahead pop outings (Wanderley, Tamiko Jones, Barbary, and Artie Butler), which, arguably, may have found wider appeal as outright A&M releases.

By 1969, jazz musicians were finding it necessary to adapt the straight-time feel of rock music to remain relevant (i.e., to be with it) and 1968 essentially marked the year that mainstream jazz crossed what may be its single most ideological threshold: moving from swing time to straight time.

Recorded in SEP1969, Stonebone, which according to Doug Payne would have been assigned "SP-3027", continues the feel of Betwixt & Between minus the "CTi trimmings": no overdubbed strings and horns; no top-40 covers; no horn ensemble interludes… Also absent is the "rock" guitar of Joe Beck — rather, we have the smooth, tasty stylings of George Benson. The very musical drummer, Grady Tate, is at this session as is Herbie Hancock — bringing along some of his remarkably singular In A Silent Way sensibilities.

Of the four songs on the LP, three would be best classified as straight-time one-chord excursions while one piece was fully arranged. Of course these are not your run-of-the-mill R&B organ trio one-chord jams; rather, these are in the spirit of Miles’ In A Silent Way / Filles De Killimanjaro — replete with a myriad of choral inversions, inventive voicings, endless rhythmic interplay and soloing that borrows a great deal from the melodic pacesetting of Sam Rivers and Marion Brown.

The first number carries a So What vibe with its ½ step-up-and-back modulation. Hancock clearly outclasses James (his In A Silent Way electric piano sensibilities are light years ahead of Bob James’ Farfisa-sounding organ…which sounds more akin to something you’d hear at a Turtles tracking session. Benson lays out or is otherwise subdued. (James lays out during Benson’s and Herbie’s solos…thank God.)

The second number is a beautiful J.J. soundscape — something the baritone-voiced trombone excels at — particularly with J.J.’s and Kai’s unique sonic-matching skills.

The final selection can be essentially classified as a one-chord vamp, I suppose. James arranged this one — the inclusion of the 3rd keyboard shows the In A Silent Way influence (itself released, 30JUL1969 — a few weeks prior to these sessions).

Overall, it’s a decent sounding LP with passable double bass (particularly so for Van Gelder). The electronic keyboards have a lot more bite (given they were probably miked from their loudspeakers) relative to traditional piano. The fat, twin-trombone sound that characterizes the previous two J.J. and Kai LPs is not emphasized here and the bones are not as full and wide-bodied as on the two previous LPs. Nevertheless, the overall sound is very good and Van Gelder’s specialty — creating larger-than-life horns — is solid.

The absence of Kai from songwriting or arrangement credits may suggest the session is more akin to a J.J. solo outing; indeed the liner notes focus squarely on J.J. There are no accolades one can bestow upon J.J.’s or Kai’s performance as both are masterful, creative musicians.

Had this LP seen a proper 1970 release it’s doubtful A&M/CTi fortunes would have changed — but to Creed’s credit, at least there is now one A&M/CTi LP documenting a solid jazz excursion; and for this we should be grateful.

As for future A&M/CTi releases from the vaults… While Doug Payne’s sessionography indicates numerous unreleased selections from various released sessions (as well as dates limited to 45 releases), Stonebone appears to be the final documented unreleased session, intended for LP release, from the coveted 1967-70 A&M/CTi period.
You must log in or register to reply here.