Thread Starter
Staff member
Site Admin
Fingers are crossed that someone is listening re: Stonebone. I left a note on the record label's site; we may need to do some "write-in" campaigns to draw some attention to it. (Provided they can locate the master tape, and UMe didn't let it get barbecued.)
Last edited: May 20, 2020

Staff member
Moderator
STONEBONE will apparently be available on Record Store Day and at Target, at least online:

Free shipping on orders of $35+ from Target. Read reviews and buy J.J. Johnson Kai Win - J&K Stonebone(Lp Rsd (Vinyl) at Target. Get it today with Same Day Delivery, Order Pickup or Drive Up.

Image posted over at SH.tv: 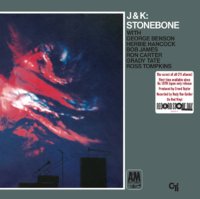 Staff member
Moderator
This is great news. CD issues of STONEBONE and CALIFORNIA SOUL would be nice too. Maybe that'll happen soon.

Thread Starter
Staff member
Site Admin
Oh, I'll be down for a copy or two!

I doubt there will be CD reissues, but I could forsee downloads in the future for both records. I know a couple of buddies going to RSD when I'm in Chicago--I might see if they can pick one or two up for me.

Staff member
Moderator
Well, I will need to pick this one up! Fortunately we have a Target here in Waco! (I don't trust ordering and having it delivered).

Staff member
Moderator
It occurred just now that neither 'ISRAEL' of 'BETWIXT AND BETWEEN' have ever been reissued on CD. I envision a 2-disc box set 'J&K: the A&M Years' with the 3 albums and any bonus material that may exists.

How about JJ&K: The Complete A&M Recordings? That would be a nice set to have!

Rudy said:
How about JJ&K: The Complete A&M Recordings? That would be a nice set to have!
Click to expand...

I totally Agree that would be an Ultimate Collection for Sure.

Bobberman said:
I totally Agree that would be an Ultimate Collection for Sure.
Click to expand...

Count me in as well. Instant purchase. Without question, the final LP to CD issue I have been longing for.

Thread Starter
Staff member
Site Admin
I have no idea when this LP will be released. I think the release date announcements for RSD titles (across the three new dates) is coming on June 1.

A small bone (no pun intended) to pick about the RSD sticker--this so far is the second rarest, as it had a limited release in Japan. The Tamba 4 was the rarest, as it never was released (outside of a 45 RPM single) and was only a rumor as far as we knew!

Contributor
I keep seeing a charge on my American Express as "pending" — another one hit today, probably the 5th time.

Thread Starter
Staff member
Site Admin
Some of the record stores seem to use a common web site platform to sell online, and I found a couple of places that let me put it on the wishlist. Like with the Tamba 4, I plan on getting two copies since there's no telling if it will ever make it to digital or not.
You must log in or register to reply here.
Share:
Facebook Twitter Pinterest Email Link
Top Bottom