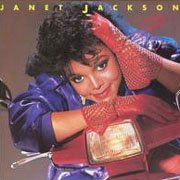 Yep, Matt, yer right!! Two years after this album came out, Janet took "control" of her life! This album was supposed to do big, because Giorgio Moroder( of Donna Summer fame) co-produced this LP, and he got English rock legend Cliff Richard to do a duet with Janet, but the album fizzled. Looking back, I am surprised that whenever Cliff is interviewed, or there is mention of him in an article, that he isn't questioned about his duet with Janet at this time period.(at the time of this duet, Cliff was...44, and Janet was...18!!Talk about May -December, huh?)

Anyway, seriously Janet had a lot going on her life at the time this record came out. She was on the hit TV show "Fame", she had just eloped with James Debarge(which was a pretty troubled marriage to say the least),whose family Debarge was called Motown's new Jackson 5, was shuttering between L.A. and New York to film the series,and trying to make a decision whether to stay with music, or stay with acting. Luckily, for the world,and her fans she decided to stick with both, and the world is all the more richer,and her fans all the more happier, I guess, for the decisions that she made in that matter.

Good effort, but the over-production hardly boosted the quality of the music, as much as predicted the diminishing result of the output...

It took, a bit of maturity among Janet and her surroundings in the industry, to give us a rebound, in the way of a Blockbuster, that Control finally gave us...

Vinylalbumcovers said:
What she needed was Jam & Lewis. Leave her on her own and she couldn't get it done. She couldn't before them and she couldn't after them either. There are isolated moments of this that work but most don't.

At least her first album had a couple of hits locally, although "Say You Do" was a ripoff of brother Michael's "Don't Stop 'Til You Get Enough." Dream Street was a dud around here--R&B radio didn't play any tracks from it, and I was surprised to see it in the used record bin, not even knowing she had made it. I think I listened to it once and never played it again; $3 I can never get back again. 😁 I think they were sort of pushing a "Michael Jackson's baby sister" vibe with these albums. Yeah, she could carry a tune, but the production was average to the point where there was nothing that stood out, and the songs really didn't have any hooks that made me want to listen to this album a second time. Flipping through it on Qobuz, my opinion hasn't changed--it's as forgettable now as it was back then.

I agree--Jam & Lewis finally gave her a voice and an attitude, and her best work was with the duo producing and writing for her. It also helped that their sound (or more specifically, their extension of the Minneapolis sound) was exploding in popularity by that point.
You must log in or register to reply here.