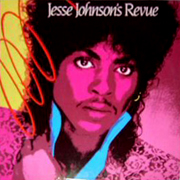 Available as an MP3 download from Amazon; used vinyl and CD copies are available also.

Staff member
Site Admin
Fresh out of the Minneapolis music scene, Jesse Johnson signed with A&M in 1984 and released his first solo album, Jesse Johnson’s Revue, our featured album of the week. Johnson is an alumni of The Time, the Minneapolis-based funk/rock outfit that made a run on the R&B charts with hits such as “Cool,” “777-9311,” “The Walk,” …

Read our full AOTW album roundup via this link.
J

I always thought that "Be Your Man" should've been a bigger hit. It had a chorus that was impossible to forget, and the arrangement had some really cool touches to it (I always loved the little five-note synthesizer lick in the background of the pre-chorus).

Staff member
Site Admin
Yeah, it was kind of a sleeper album around here. The lead-off hit "Be Your Man" made a bit of an impression on local radio, for sure. (Detroit was a big town for Prince back when he was still breaking through, so we were always hip to anything from Minneapolis.) It did Top 10 on the R&B charts, as did two other singles, so that wasn't too bad of a showing. Jesse even has that "look" from Minneapolis, but I think by that time, the public had moved on. Prince himself went off in another direction (Around The World in a Day, which was a curve ball IMHO). I will say that I don't feel Johnson had the right promotional push--from a "consumer" standpoint, I certainly never heard as much as I should have about Johnson.

Quite a few splintered off from the Prince organization. Andre Cymone would leave the Revolution early on and release his own albums; IIRC, Dez replaced him. Jimmy Jam and Terry Lewis left to become notable producers. Wendy and Lisa left The Revolution also. The version of The Time IMHO was rather weak on Ice Cream Castles, no offense to all involved, but like the two previous Time albums, Prince played most of the instruments anyway. (The live track "The Bird" however, was The Time. And having seen The Time in person, they played their jellybeans off!

Staff member
Site Admin
One of the earliest videos of The Time--the full warm-up set for a January 1982 concert at the Capitol Theatre. Jesse isn't seen that much, but if you're familiar with the first album by The Time, the "real" group totally outplays the Prince/Morris Day originals from the LP. (The only place this original group would appear on the first album was...the album jacket.

) Two things to note: window dressing Jerome (Benton) was not part of the group at this point, and they perform "Dance To The Beat", which did not appear on any Time album. Seeing it is 1982, they only had the one album out, so their repertoire was limited. Classic footage! And even with the limited sound, the band sounds very tight. "Cool" was like our national anthem in high school.