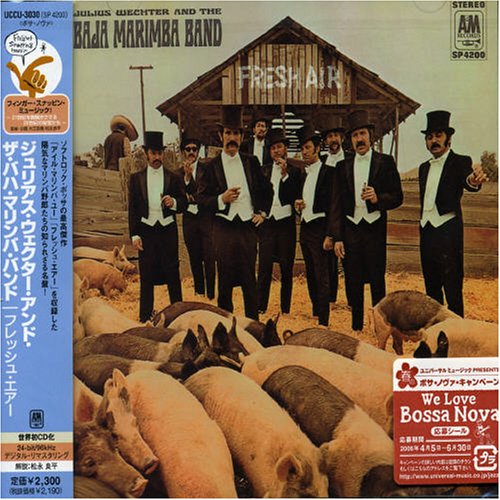 Briefly available on CD from Japan as UCCU-3030 as pictured.

Staff member
Site Admin
Thread Starter
Incredibly, we've never had a thread devoted to this album - at least I cannot find one. It was tossed around as a topic when the CD was issued in 2006, but there has never been a dedicated thread - so I tossed together one of our "Classic AOTW" threads. The poll allows TWO favorite choices from the album.

Moderator
For me "I'll Marimba You" is one of the all-time great BMB tracks, period. Great playing by Julius! The title track is also great. The lone flaw was "I Don't Want To Walk..." which just never did anything for me. Good album, though!

Staff member
Site Admin
Thread Starter
I was listening to the title track, "Fresh Air", today and I wonder if some of the hoots and hollers going on in this one could possibly be attributed to Lani Hall. We know that when they wanted a party atmosphere for a recording at A&M, they invited just about everybody into the studio to give it that kind of sound. There's one high-pitched voice in "Fresh Air" that to me sounds just like Lani Hall. She's the one yelling "Heyyyy...." or "yayyy..." (listen at about 1:15 and again at 1:50 or so). She might have been around the studios in 1969 when the track was recorded. Great track, regardless.

I always thought the same about Herb's "Fandango", the 12" mix features the same exact voice which to me sounds like Lani.

Staff member
Moderator
I managed to score one of the Japanese CDs of this. I'm still incredulous that they released it.

Back in the days when the album was new, I liked the title track the best. I would play the 8-track and knew exactly where to switch-out of the other channels when "Fresh Air" was about to start. Now, though, I tend to like "I'll Marimba You" and "Eleanor Rigby" and "Cielito Lindo" the best.

I have mentioned before that "slow" songs took a while to grow on me.... when I first got into the TJB and Sergio Mendes, I didn't like ballads at all. But now they are some of my favorite songs by both groups. On the Baja albums, however, the ballads still leave me cold. I guess it's because they tend to sound a little bland compared with the more raucous tunes. For me there's more of a contrast between fast Julius and slow Julius, than there is between fast and slow Sergio, for example.

About "I Don't Want To Walk Without You"..... my mother in law is a TJB fan, but she had never heard of the BMB. So I made her a CD of the "best of" the BMB, and included that song. It turned out to be her favorite of all!

I Enjoy Every track on this however its a bit shorter in length than usual . But still excellent!"Samba Nuevo" and " I don't want to walk without you and "Ill marimba you. Are my favorites i voted for two of these. And its one of the more rare BMB albums.

It just so happens this album was just released April 1 on mp3 download at Amazon!!!

Steven J. Gross said:
It just so happens this album was just released April 1 on mp3 download at Amazon!!!
Click to expand...

"Oh WOW" That is a Surprise. Lets hope they release more in the future if not on cd at least in in digital form.

Wow, TWTD too? This is significant! Awesome.

The Amazon releases are the real deal - not pirated?

Staff member
Site Admin
Thread Starter
They look real to us. These are mp3's taken from the Japanese CDs, most likely.

Cool. I've got to check that out.

Yes, it is very short in run time, however I'll take quality over quantity any day. Production values are excellent and song/arrangements stellar.

Cielito Lindo as an opening track is a brilliant arrangement.

Staff member
Site Admin
If you are ever in doubt, look down at the release information. If they say Universal or one of their labels, it's legit. 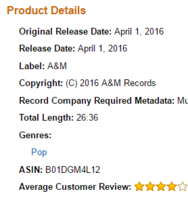 Rudy said:
If you are ever in doubt, look down at the release information. If they say Universal or one of their labels, it's legit.

Thats Exactly Right " They are The Real Deal!" As i said i listened to the samples they sound pretty good but i still have pristine vinyl versions of these ( plus companion needledrop cds which to me sound slightly better. Just my opinion.

I had the LP when it came out, and I remember seeing the BMB performing one of the tracks on a prime-time variety show (can't recall which show it was) attired in tuxedos in the pig sty, possibly with the pigs; this was a long time ago! "Windmills" was always my favorite track, though there's not really a dud on the album. I remember thinking that Julius's vocal outing was a deliberate attempt to emulate Herb's vocal success at the time, but if so it sure was a strange choice.

mikeargo said:
I remember thinking that Julius's vocal outing was a deliberate attempt to emulate Herb's vocal success at the time, but if so it sure was a strange choice.
Click to expand...

I really liked "I Don't Want To Walk Without You". In fact, I heard it on the radio and it was the first time I took notice of the Baja Marimba Band. The public wasn't all that crazy about it - on the Hot 100, it only managed to get to #121 (bubbling under).

Staff member
Moderator
You must log in or register to reply here.