Harry said:
I finally got around to making a rear cover for Julius' FOURSIDER. Be advised that this includes both "Summer Samba" and "Brasilia". 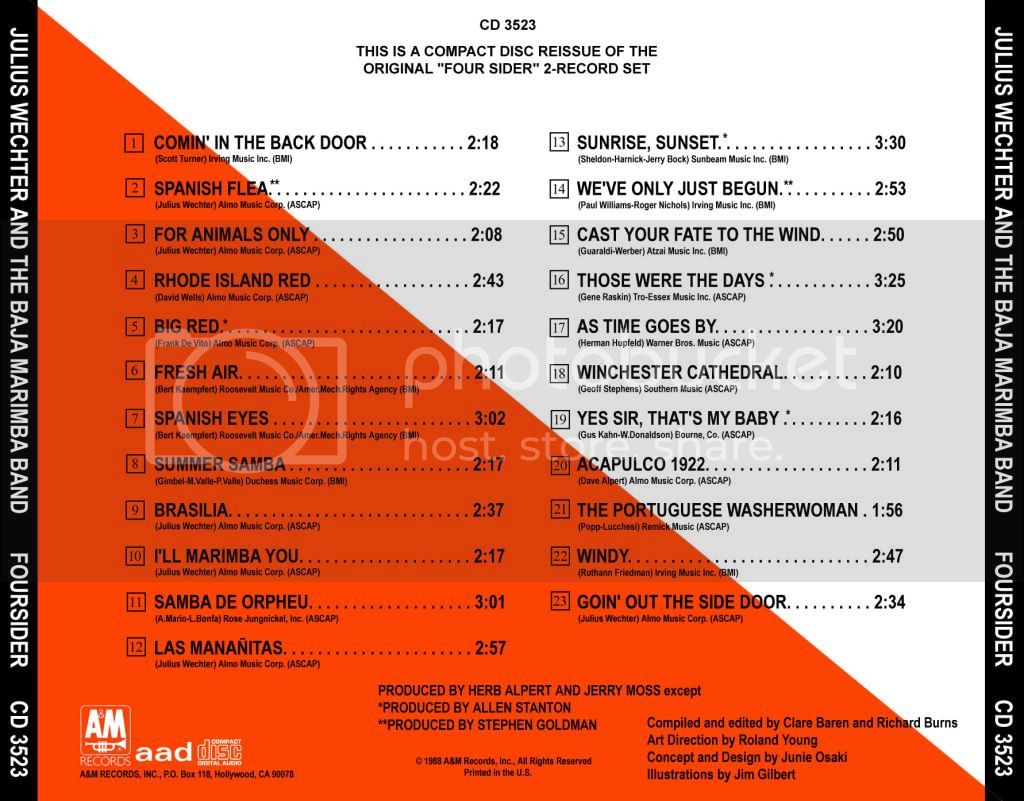 Excellent Work Harry you have everything spot on right down to the last detail. ( minus bar code but that's not an issue"!) It would have fit in perfectly with the other "Foursiders".

Staff member
Site Admin
Thread Starter
Thanks. In the last year I've learned why I was having problems in Photoshop. Every time you add text and need to do something else, you need to "flatten" the image first and then proceed. At the time, I was saving the file after each addition, which had the effect of flattening the image automatically.

Got the DJ album copy of Baja's "Foursider" on the white A&M label!!

Staff member
Moderator
Nice job on the cover! I was scrolling down the thread and saw that and thought, waitaminit, did this come out on CD and I missed it?! Good work.

I've always meant to create myself a CD of these songs, but never never gotten around to it. Probably because a lot of my biggest favorite tunes aren't included....I was especially disappointed that it didn't have "Always Something There To Remind Me," on it. And why they left out "Juarez" is a major mystery. That song kicks!

I have a pretty good Baja compilation that I made myself -- I titled it Un alblum de grandes proporciones, which is the phrase "An album of major proportions" taken from the liner notes of the Rides Again album and translated to Spanish.

"Don't you just Love Creating your own Custom Compilations?" Speaking for myself I know i sure do. The process is not only fun but it is even more fun playing back your handy work.

Yes, I do love making my own custom compilations. That said, there are some LP compilations that are quite good. This one however is just average.

Staff member
Moderator
Looked at my own comp last night and found that there are only 12 songs they both have in common. No wonder I didn't ever feel like recreating Foursider!

I just recently attempted to create my own version of the BMB foursider on a CD-R using a combination of the tracks from my collectors choice "Best of" cd and my very clean needledrop cds from my vinyl since i have ALL the tracks from foursider and all the regular BMB albums on vinyl plus the aformentioned best of. I managed to pull it off and i took a cue from Harry by including both "Brasilia" and Summer Samba" it sounds very good over all granted its not 100% perfect but its acceptable for what it is.
You must log in or register to reply here.