Thread Starter
List the cat # sequence and tell us: (1) how such a long unbroken sequence came into existence, and (2) the specific circumstance that both initiates and breaks the sequence.

Thread Starter
I can only come up with 7:

Staff member
Site Admin
I can claim ownership of LPs of the first 20 albums from A&M. Claudine at 4121 breaks the chain of LPs as I have all of her stuff on Japanese CD. Still, I own at least a CD or LP up through SP 4139, Roger Nichols. I lose it at Lee Michaels.

Caveat: Boyce & Hart at SP 4126 I own as a CD compilation from RR in the UK.
The Parade, though unreleased as SP 4127, was released on both Japanese CDs (which I have) and UK CDs. 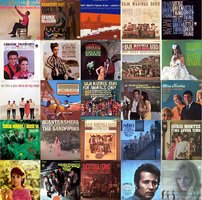 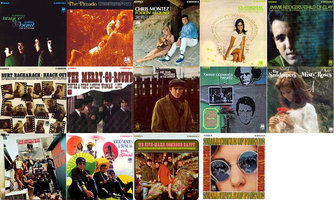 Staff member
Site Admin
The only thing I can think of is the A&M/CTi series, just about all of it on vinyl.

Rudy said:
The only thing I can think of is the A&M/CTi series, just about all of it on vinyl.
Click to expand...

Oh, man -- I totally forgot about the CTi releases.

Wes start began it: purchased in high school based on the cover art and the label. Roger Kellaway ended it: I briefly had one of his '60s LPs and, candidly, just didn't think it was a very good record. (To be fair, I should volunteer that I do have SP 3007 LP (Artie Butler), which is even more unimpressive. I'm sure Herbie Hancock and Ron Carter were counting the minutes on those sessions.)

Harry said:
I own at least a CD or LP up through SP 4139, Roger Nichols. I lose it at Lee Michaels.
Click to expand...

Indeed, that's why SP 4140 is so significant: arguably more than any other LP to date it's a left turn...but that turn is where the A&M musical direction ultimately went. (After years of avoidance, I recently took the plunge...and I like it; in fact, it has grown on me -- but one has to be up for that rawer '68 sound. I mean if one is into the progressive side of pop music in '68 then the Michaels is a good listen.)

Staff member
Site Admin
I do have the Lee Michaels LP here--I wasn't looking for it, but came across such a clean copy a couple of decades ago that I couldn't resist picking it up out of curiosity. (It's one of those cases where I'd seen the album for many years on all those old A&M innersleeves.) The same happened with the first Chris Montez LP--I'd never owned one of his before, but Encore Records had a copy of it for $12 that looked as though it had never been played. I remember buying a sealed Baja LP, only to find a brand new Claudine Longet Colours inside, with no innersleeve.

One A&M-distributed series I'd like to get my hands on one of these days are the releases on I.R.S. Records. It's one of those things where I wouldn't have had the money to buy all of them back when they were still available new. I still pick one up occasionally as I come across them, but like anything I collect, I get it because I'm interested in the music, not so much because I'm completing a number series (although that's a nice side benefit if it happens). I had also wanted to get all of the A&M Audiophile releases, but that's a series (SPJ vs. SP) as opposed to being sequential.

The sequential winner would probably be @LPJim, with @Mr Bill and @Steve Sidoruk being similar I would imagine.

Staff member
Moderator
I'm almost complete on the 4100-4400 series. The first break occurs at 4186 with the debut self-titled STRAWBS album. It was a U.K./Canada only release, which I have on LP & the Korean CD reissue. Their 2nd, titled DRAGONFLY, doesn't have a corresponding U.S. catalog number. This was the first to feature Rick Wakeman and also saw Korean reissue on CD.

Siwan is the Korean reissue label for the Strawbs items.

Next came SP 4192, which was slated to be a Ronettes (Ronnie Spector) release from the brief A&M partnership with Phil Spector which bore the Ike & Tina and Checkmates albums. There was a single, "You Came, You Saw, You Conquered" ("Oh I Love You" as b-side). If anything else was recorded for SP 4192 and shelved I have no clue.

In the 4200 series I have gaps for SP 4256, where the title REGGAE CHARTBUSTERS is listed. Perhaps that later expanded to the 2-LP REGGAE SPECTACULAR compilation.

Willie Bobo's GETTING HEAVY (SP 4244) was unreleased, but I found a CD compilation of 1970 sessions which is likely the same album.

Tying in with the Joanne Vent thread, SP 4255 was for her unreleased second album MUSCATEL. There's a You Tube clip of her singing with a group named Muscatel.

The lost album from BRYNDLE (SP 4278) is one I'd love to have. This was the group comprised of Karla Bonoff, Kenny Edwards, Wendy Waldman and Andrew Gold. They reunited in 1995 to tour and record two new albums. I caught one of their shows and afterwards mentioned the lost recording to Ms. Bonoff. She speculated the album may have been lost in the 2008 disaster. There was a promo 45 of two songs I located. Needless to say, there was much singing and songwriting talent in this band.

SP 4283 was supposed to be a live record from Phil Ochs. I have a CD titled LIVE IN VANCOUVER which likely contains the sessions for this.

SP 4285 should have been the 2nd Lambert & Nuttycombe album. Titled 'WAIKKI' by A&M but released elsewhere under the title 'AS YOU WILL.'

SP 4286 was a U.S. catalog number for a Jimmy Cliff album from Island that contained his version of Cat Stevens' "Wild World."

(I will look through the list for more missing items later)

Staff member
Moderator
I think 4283 (Ochs) was more likely the intended US release of Gunfight At Carnegie Hall, but was shelved after sales of Greatest Hits (his final original A&M album) continued to show a decline in his sales and presumably, popularity. His Vancouver live album was recorded after Tape From California, but before Rehearsals For Retirement, as Ochs even mentions "new songs" as he performs some of the tunes that eventually ended up on Rehearsals. However, the 1970/71 time frame of this range of SP numbers, it could've been either one, but I lean toward the Gunfight theory as the more likely intended live album.

Impressive with a capital "I", to say the least!

I like very much that you've addressed the numerous holes in the SP 4100 -- 4299 sequence, which has fascinated me for a few years now (and which I'd like to assemble for a future None&Done post).

The following four continue to stump me:
Do you know anything about these?

The pre-internet data bass has an unnamed Joe Cocker project for 4263 and a 'Punch' album for 4275. This band released 4307 later.


I do have UNDER MILKWOOD as indie label reissues by the Akarma label but not A&M original (if such even exists).

Staff member
Moderator
This 2006 Concord label release seems likely to be what should have been SP 4244. The tracks were recorded in 1970. The liner notes say all of the tracks were previously unreleased.

Staff member
Moderator
Akarma issue of SP 4226 on CD & vinyl which came out in the mid 1990s. The sound is similar to Fairport Convention and Jefferson Airplane.

4320 THIS LAND IS OUR LAND by Yellowcorn -- AKA "Chief Yellowcorn," native American

4357 MICK ABRAHAMS BAND --- another domestic # for an overseas issue 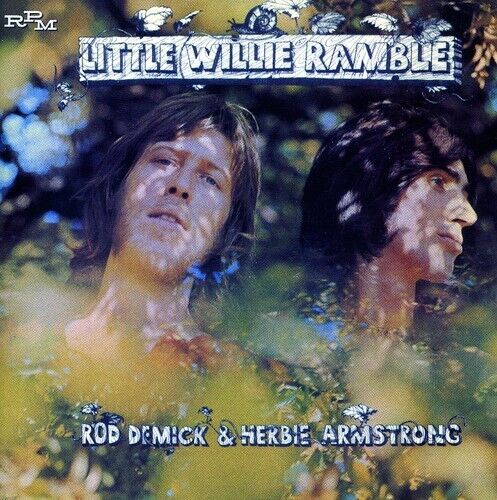 Find many great new & used options and get the best deals for Little Willie Ramble by Rod Demick (CD, 2012) at the best online prices at eBay! Free shipping for many products!
www.ebay.com

Demick & Armstrong (RI of 4347 or possibly an earlier album).

I do not have an unbroken sequence for A&M other than 4110, 4111 and 4112. Out of the first 39, I do have 16 of those in my collection and do watch for others. I found the Phil Ochs at a thrift store but unfortunately, the record itself was not in the jacket or anywhere else in the group of albums on the shelves.
R

Staff member
Site Admin
I just learned that my only entry from Boyce & Hart is that compilation from RR records, and it does not contain all of the tracks from TEST PATTERNS. So I can only legitimately claim 101-4125
Last edited: Jul 19, 2022

I looked out of curiosity--it was released, but all I found was a release in the UK under the AMLH 68098 catalog number. If it ever had a US release, apparently nobody has posted a copy of it on Discogs. 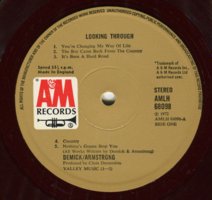 A
Carpenters Rolling Stone Cover Story - Up From Downey (1974)