Rudy said:
That certainly is possible. I've never seen a timeline for cassette labeling with A&M. Some had AMPEX on the paper label, others didn't, and then the tapes with the printing right on the plastic. It kind of makes sense that they would find it less expensive to print right on the shell, and that it might have followed the tapes with the paper labels.
Click to expand...

I assumed (but have no proof) that the ditching of paper cassette labels coincided with A&M's move to recycled paper for its LP inner sleeves.

I always thought the black A&M 8-tracks looked very cool. Sorry to hear they were unreliable. Mike, were there similar issues with other colors? If I recall correctly, most were white until A&M went black, and then suddenly a lot of labels were using a lot of colors.

Michael Hagerty said:
I assumed (but have no proof) that the ditching of paper cassette labels coincided with A&M's move to recycled paper for its LP inner sleeves.
Click to expand...

I don't know if it's that, or if it was just the duplication industry finally finding a reliable way to print on plastic. I didn't buy many cassettes, but the few I owned from later years I believe were all printed directly on the shell.

Rudy said:
I don't know if it's that, or if it was just the duplication industry finally finding a reliable way to print on plastic. I didn't buy many cassettes, but the few I owned from later years I believe were all printed directly on the shell.
Click to expand...

I was a latecomer to cassettes---1984. I kept an 8-track in my cars until January of 1979, when I got a car with an AM/FM stereo radio standard, and there were enough good radio stations in the area that I didn't feel deprived. For the next five years, I was strictly vinyl. When I traded that car in '84, I had an Alpine AM/FM/cassette deck installed in the new one and that's when I started buying and making cassettes.

Staff member
Site Admin
I mostly made my own cassettes for car use starting around 1980, when I installed a little under-dash cassette player in the car. And I'd been recording my own cassettes prior to that. I did have a phase of a year or so where I was getting mainly prerecorded cassettes vs. vinyl, but with the sound being sub-par, it didn't take long for me to replace those cassettes with vinyl (or CD in a few cases). I still have dozens of cassettes I recorded, but very few prerecorded.

Staff member
Site Admin
I was working for a cash-poor radio station in 1974 and since they couldn't do Christmas bonuses, they raided the prize closet instead for the employees. My "bonus" was an Akai stereo cassette deck. It looked a good bit like this: 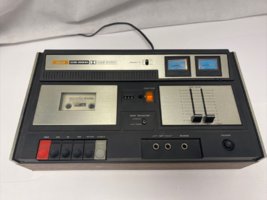 I think the input and output jacks were on the front, but you get the idea. This was my first taste of anything remotely "high-fi" in the cassette world. One of its niceties was that it had a really quick start-stop by using a pause button. Don't see one on that picture, but it was lightning quick - instant stop and start again at the press of a button. That enabled me to do some really quick editing on the fly. I recall using it to try to edit down the "Lobo" track from the Herb/Hugh album to something resembling a single radio edit.

I also had a little portable cassette recorder/player, and once I figured out that I could take the thing in my car, I started using the Akai to make what came to be known as mix tapes. Then I'd hook the small player in the car up to an old stereo speaker from a defunct record player, and I had a cassette player for riding in the car. The sound was a little weak sometimes, but it was a good introduction to something other than radio in the car.

In all of my years, I think I've purchased less than 10 pre-recorded cassette tapes. Maybe 15, but no more than that. I always made my own cassettes with the good Maxell XL-II tapes and when I finally got a car with both CD and cassette players, I was set. The mix tapes sounded pretty good - except when riding on excessively bumpy roads - and in Pennsylvania, that was a very real scenario.

I numbered my tapes - some for me, some for Marie - and they were good company on long trips. My "programming worked out so well that just last year, I found those old tapes and re-did them on CD - yes, our cars still play CDs since they're so old! Tracking down some of those records was a chore at times, but I managed.

I never used or even handled an 8-track tape.

Staff member
Site Admin
I had a job with a company car back around when the economy imploded in 2008-2009, and it only had cassette (it was probably an '04 or '05 model). I wound up going to a thrift store during a lunch break, and bought a dozen or two cassettes for a dollar each, if that (might have been a 2-for-$1 sale). That was the last time I bought any. I quit buying blank cassettes in the 80s; I still have some sealed and unused. Now that they're worth something, I should sell them off.

My grandfather had a Realistic tape deck that didn't look much different from that Akai--it's possible Akai made it for them. I still have it in a box here, in fact.

I never got rid of my Harman/Kardon CD301 cassette deck--their decks (especially the top "400" series decks) were considered nearly the equal of the Nakamichi decks back in the day, for less money. The CD401 would have been the top model in the generation I own, and the CD491 was the next generation that was their penultimate deck, with the following generations (the TD series) being cheapened up and lacking in sound quality (I owned one of those for a few years--a sturdy unit, but it couldn't match the sound quality). What made them stand out was that the bias level and Dolby calibration levels were adjustable from the front panel--you'd record a test tone and get the meters to a certain point to ensure it was electrically adjusted to the individual tape brand you were using.

I'd get a CD491 today if it weren't so expensive. And I think those were the first generation to come in a black finish. They normally were a frosted silver front panel that was unique.